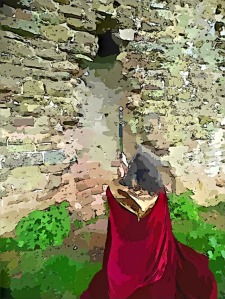 and the seven chieftains of Dyved climbed with him…

As they sat in counsel on the top of the Fair-Mound, they saw a woman, wearing gold

brocade, riding by, on a pale white horse.

Of comely bearing, and fair in face and form she was, and a fine, fitting, match for any young man.

She was approaching along the highway which ran past the hill.

“Men,” said Tyrnonos, Thunder-of-Water, “does anyone here recognise that woman?”

“No, indeed, Lord,” they all answered.

“Then let one of you go to find out who she is,” said Tyrnonos.

Caradawg went but by the time he had reached the highway, despite her

steady pace,  the horse-woman had already gone past without so much as

a look to the left or to the right of her. He followed on foot as best he could

but the greater his speed, the farther ahead she drew and when he saw

Tyrnonos, “Lord, it is pointless to follow the horse-woman on foot.”

Now, Tyrnonos, who was a prince among princes, was not used to such treatment from

“All right,”  he said, “but there is some meaning in this, let us return to the hall

and see if she rides past this way tomorrow.”

“a woman who will not stop for the lord and his company!” …

Excerpt from, Crucible of the Sun

Once upon a time we gathered around the flames of the hearth and listened to tales of long ago and far away. The stories grew in the telling, weaving ancient lore whose origins lie somewhere in a misty past with tales of high adventure, battles, magic and love. In Crucible of the Sun this oral tradition is echoed in a unique and lyrical interpretation of tales from the Mabinogion, a collection of stories whose roots reach back into the depths of time, spanning the world and reflecting universal themes of myth and legend.

Available worldwide via Amazon, in paperback and for Kindle.