We gathered by Whitesands beach, just outside St David’s in Pembrokeshire… a small group of people from all walks of life, putting aside the cares and pressures of the daily grind to explore the sacred landscape of Wales. A time out of time. A weekend is too short to see enough of anywhere… and an area such as this, so rich in natural beauty, history and legend deserves all the time you can give. We had only the weekend, but our guide and Companion had carefully planned the days to share as much as she could of a place that is very dear to her heart. 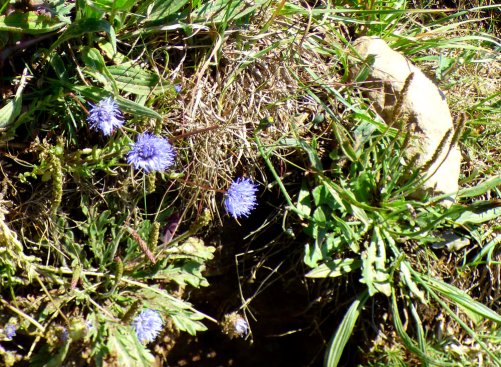 For myself, the time in such a landscape was much needed. It had been a busy several weeks. Ever since the April workshop in Derbyshire it seemed as if I had been on my feet or cursing them, especially after the incident with the spider bites. With an unexpectedly rapid house move thrown in for good measure, I was wound up tight and the healing of stone, sun and sea was a balm that I craved.

Few places could have been better than where we began the weekend. A curve of pale sand nestles between limestone cliffs and is bounded by the bluest sea and a profusion of wildflowers. Carn Llidi rises against the azure sky; its name may mean either the ‘Cairn of Wrath’ or the ‘Cairn of the Gates’. The former may refer to the storms that can batter this headland, but I prefer the idea of the Gates. Walking in its shadow we began a journey through the ancient past.

The first living field of wildflowers that we crossed hides a secret. This place was once the site of a chapel dedicated to St Patrick, as it is told that it was from here at Porth Mawr that the saint took ship for Ireland some fifteen hundred years ago, after being granted a vision. The chapel was already in ruins four hundred years ago and only a small mound now marks where it once stood.

Many stories are told of the place… how the patron saint of Wales, St David, studied with St Paulinus at the monastery… now a white farmhouse called Ty Gwyn (which means ‘White House’) just above the beach. St Non, David’s mother, is thought to have lived there too when it was still a religious community and may have been educated by Maucan, who, in his turn, had learned at the feet of St Patrick. Pilgrims gathered here before crossing the bay to the great cathedral of St David’s… and I have to wonder whether the ‘white’ of the names refers to the pale sand… or to some inner ‘whiteness’, the purity of a place that has long been held sacred.

Beneath the flowers is a burial ground. Storms have exposed the remains of the people who lived here centuries ago, some of whom may have known St Patrick himself. Archaeologists have moved to protect and preserve the site and around fifty skeletons were excavated during a recent dig… just a small part of the community that was buried here over several hundred years. The burials were unusual for their time as many people were laid in stone-lined cysts. One held a small, standing stone cross, the first ever found in Britain in a long cyst grave.

More poignant though are the graves of the children; buried amid such beauty, their parents laid them to rest with layers of quartz crystal and shells. Were they simply gifts, given in love to go with them on their soul’s journey? Or was there some deeper mystery that we have forgotten? We may never know. Much is lost beneath the sands… 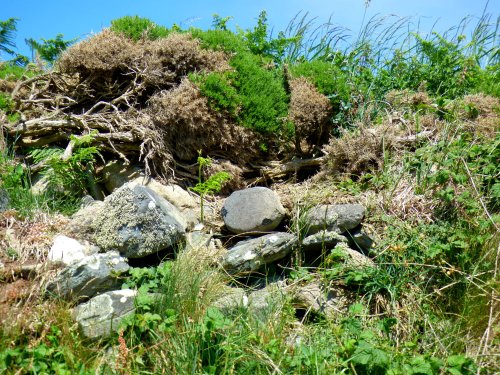 This is a place of peace and beauty in summer… a harsh and storm-torn land in winter, yet through it all, it survives, ever changing, its beauty reborn with the touch of the sun. It has been here longer than mankind, yet our story is deeply etched on the land. Beneath the waves and visible at the lowest tides is an ancient forest where hunters sought the auroch, deer and bear. A community that spanned the centuries sleeps beneath the flowers, and in the concrete car park, modern history is remembered with a plaque and a propeller, commemorating a Marauder that crashed there, killing its four-man crew at the end of WWII.

This place of peace was home to Halifax bombers, several of which were lost in combat… yet it has also been a place of saints. Even so, the hand of Man, with all his contrasts and conflicts seems but a little thing beside the beauty of Creation, yet perhaps it is because of such small contrasts that we are able to appreciate the greater whole. We see best where there is both light and dark.

3 thoughts on “Going West: A Field of Peace”