We could see, as soon as we passed through the gate, that the church in Kirkoswald was going to be a good one. The village itself bears its name… Oswald’s church… and the dedication was given because the body of the sainted Northumbrian king had passed through the village after he was killed by Penda, the last pagan king of Mercia, at the Battle of Maserfield, fourteen hundred years ago. 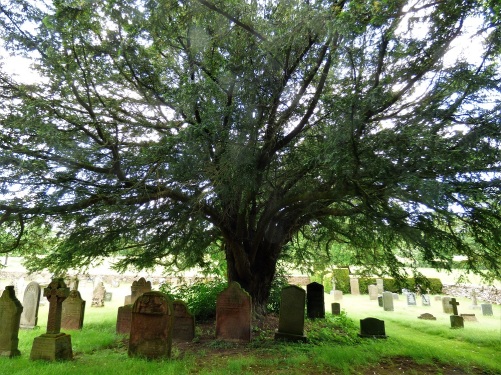 We have crossed St Oswald’s path many times before. It was he whose relics had rested in Bamburgh Castle, which we had visited during the Northumbrian workshop, and he who had given the island of Lindisfarne to St Aidan, whose shrine we had also visited on that trip. 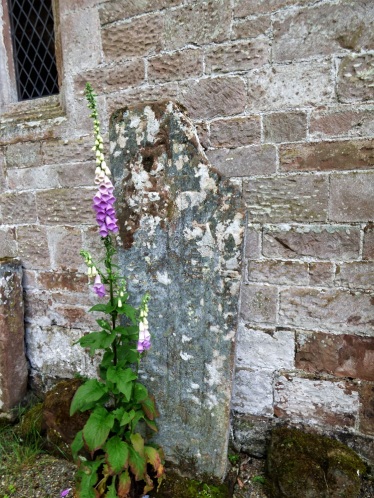 There are many tales of miracles associated with St Oswald, some of which have overtones more often associated with pagan, rather than Christian, myths. Perhaps the best known is that when he was slain, dismembered and beheaded on the battlefield, a raven lifted up his severed arm and took it high into a tree. The tree lived to be a venerable age, with all the vigour of youth… but, more importantly, for our adventure, where the arm finally fell to earth, a healing spring rose from the ground. 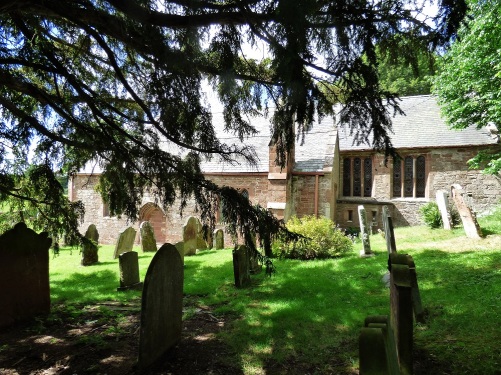 There are great yews guarding the churchyard, large enough to have stood watch for hundreds of years, and a collection of medieval grave slabs, similar to those we had seen the day before in the little church at Rodel… now over four hundred miles and almost a lifetime away. The Western Isles seemed almost to have retreated once more into the mists and yet they were very present in our hearts and minds as the adventure drew to its close.

We spent a while examining the details carved into the stones. One in particular caught my attention; covered in chevrons that looked almost like waves. Water, in all its forms, seemed to have played a rather prominent part in our adventures. The stones were arranged around the porch, whose massive timbers have sheltered the faithful since 1523. The church, though, is much older, and parts of the twelfth-century building still remain. 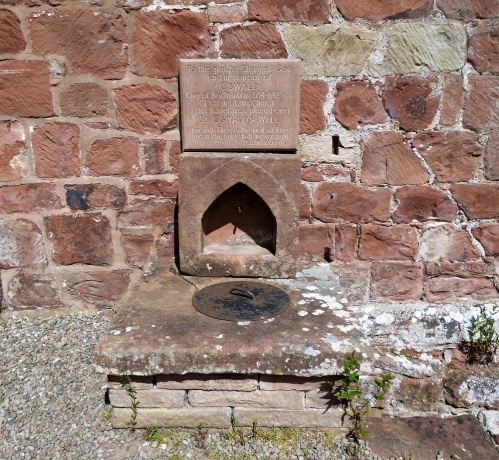 Before going inside, we took our usual wander around the church. As we rounded the corner, I remembered why we had thought this church might be a good place to bring the group at the December workshop had it rained; I had read that a sacred spring, dedicated to St Oswald, runs beneath the church and emerges by the west wall. 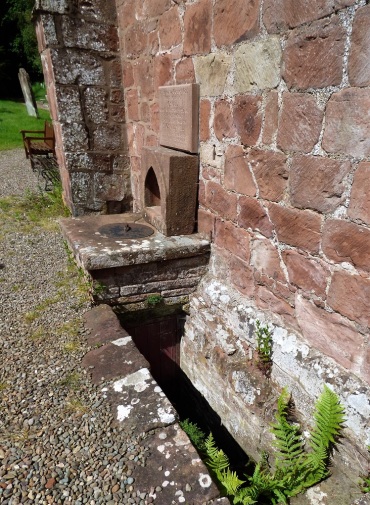 But we did not expect what we found… A well, straight out of legend, plunges deep into the roots of the church. Covered by a metal circle reminiscent of a shield, there are steps running down beside it to a small door at water-level. Above the well is a modern plaque, affirming the dedication of its water to the saintly king Oswald.

A hook holds a heavy, chained cup with which to draw water from the well. The waters of the well are clear and pure, its source unknown. Lowering the heavy cup on its chain to draw water seemed a magical act, a timeless connection to both the earth and its life-giving bounty and to our ancestors. In the old stories there is always a well-maiden, yet here was I, erstwhile maiden, now both mother and crone, engaged in an age-old task. I offered the cup to my companion, realising that this simple task drew together many threads of history, myth and legend, from the mundane to the arcane, from the quenching of thirst, through the hope of miracles, to the lore of the Grail.

We walked on, exploring the churchyard and were greeted by a grey-haired walker who looked like a modern-day Merlin, accompanied by his ever-curious dog. After the well, it felt right somehow.

Around the corner was another venerable yew tree and, just beyond it, a memorial in the shape of a Celtic Cross that drew our eye, not only for the stone itself, carved to commemorate a previous minister of the church, but for the fact that it bore the carving of a chalice. Nothing unusual there, not for the grave of a priest, but not a common motif… and an appropriate symbol for the moment. 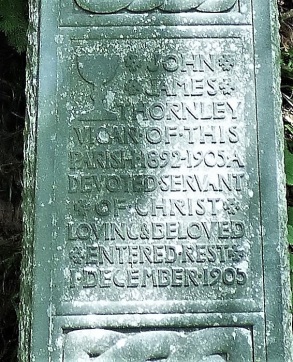 Making our way back to the porch, we paused to wonder at the five-hundred year old beams from which it is made and wonder when the trees that made it had first grown. Beside the door were two weathered, unrecognisable heads. Would the interior hold any surprises? There was only one way to find out…