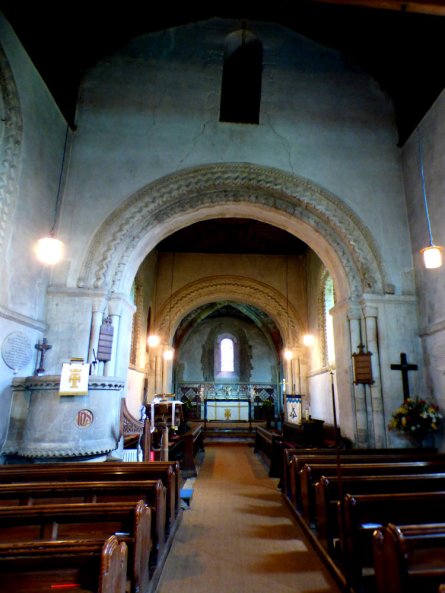 The interior of St Michael’s and All Angels in Stewkley hasn’t changed very much in the 850 years since it was built. It hasn’t changed much since Geoffrey Chaucer, author of the Canterbury Tales, visited when staying with his son who held the Manor of Stewkley in the 13thC.  There have been renovations, of course, but they were carefully done, including the inevitable Victorian restoration in 1862 by G.E.Street which, for once, was no more than that. There are none of the swirls and curlicues, no heavy-handed imposition of style, just the love and care to preserve a real gem of a church.

It is a simple place, a three-cell structure of nave, tower and chancel. There are neither chapels nor transepts… just the single long aisle that leads to the altar. There is little in the way of stained glass here and the woodwork is simple, including the organ loft in the west. Like the wood, the pulpit is ‘new’, an addition by G.E.Street created in a similar style to the rest of the building… and it is the building itself that holds your attention. 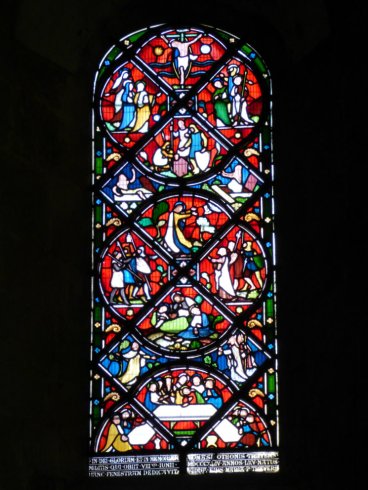 The massive 12thC font stands directly in front of the door, utterly plain and because of that, powerful. Around it are the clutter, pamphlets and notices of a community… the place seems still to be a living heartbeat in the village. 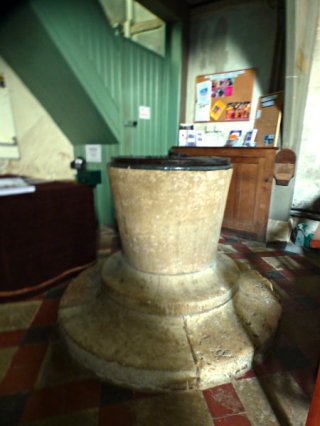 But even the solid presence of the font cannot keep the eyes away from the body of the church. The deceptive simplicity and lack of decoration seems both to highlight its treasures and render them commonplace… which they certainly are not… drawing the eye towards the altar and the green depths of the strange light that is always present until the electric lights chase it away.

The walls are clean and white, pierced with tall, arched windows edged with distinctive Norman zigzags. The roof is high and light streams in through unstained glass. And the place is green. The gilded alabaster relief of the sinuous Virgin and her companions catches that light and the pale stone echoes a spring of rebirth. Below the sculptures which may once have been part of a reredos… a relief behind the altar… five 15thC tiles are set into the wall. the current reredos is a symbolic marble inlay, designed, like the pulpit, by Street.

Street employed Clayton and Bell, better known for their stained glass designs, to decorate the quadripartite vaulted roof of the sanctuary with what appears to be a tree of life design with a solar symbol at its heart. The single light windows that illuminate the altar bear the chevrons and arches of the Normans.

The piscina, to one side of the altar where the holy water was poured back into the fabric of the church, dates back to the 13thC and hides a secret. You have to move the wooden cross that now stands there to find the tiny carved head affixed to the wall…and it always looks rather more Aztec or Egyptian than Norman. Beside the piscina a 13thC sedile is carved in stone, the seat for the officiating priests and from here you can see the length of the church from altar to organ loft.

For me, though, the real treasure lies in the tower arches, high above. They are carved with a beak head design… so called because they are covered in what, at first glance, look like triangular beaks. It is only on closer inspection that you begin to see what they really are.

The arches are supported by pillars with carved capitals, all different but bearing a flowing design  like water. 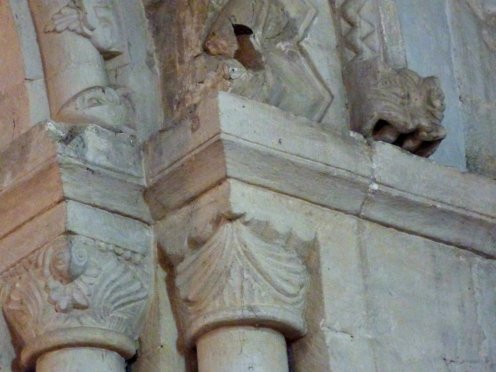 Each outer end of the chevroned arch terminates in an animal mask. Some look ferocious, others calm and serene, seem to be crowned with jewels…or perhaps they are a leopard’s spots.

But it is the inner decoration that is the most amazing. Each of the ‘beak heads’ is different. Some are undoubtedly birds and qualify as beaked. Other seem more like cats…and there are strange creatures that are neither beak nor head. 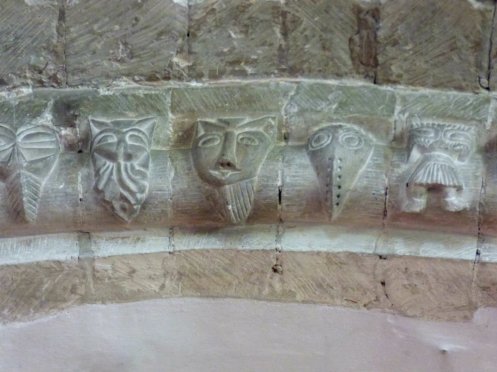 I had been to the church before and it had played a part in the writing of The Initiate with Stuart… but it was the first time I’d had a long enough lens to get clear shots of the arch and see the details, as crisp after 850 years as the day they were carved. Some are almost recognisable creatures, others are fantastic and their stories and meanings are long lost to us. Yet others seem to resemble the Green Man, disgorging foliage… or flame… which, coming on the heels of the Leaf and Flame workshop and its quest for the Green Chapel, seemed all too appropriate. 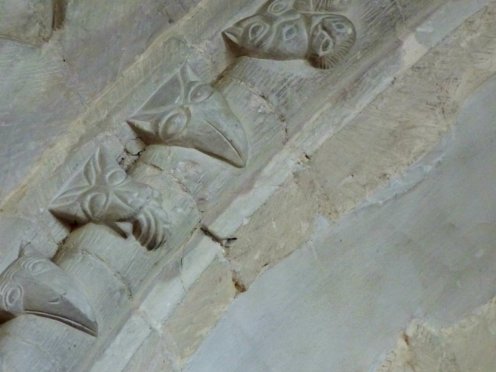 Some are almost recognisable creatures, others are fantastic and their stories and meanings are long lost to us. Yet others seem to resemble the Green Man, disgorging foliage… or flame… which, coming on the heels of the Leaf and Flame workshop and its quest for the Green Chapel, seemed all too appropriate. For a little village church, it asked a lot of questions… and leaves a real sense of awe.