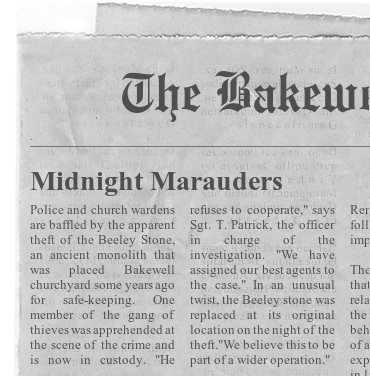 Lands of Exile: But ‘n’ Ben

For once, Don was right… it was all Wen’s fault.
If only Ben had not insisted on going back for the gun…
Don and Wen should hand themselves in and share the fate of their co-conspirator. It would be the noble thing to do.
Does this course of action appeal to our errant duo?
Not on your Nelly!
As Ben languishes in the dank cells of Bakewell Gaol, Don and Wen hit the road. Their headlong dash for freedom takes them north, where they are beset by a host of ‘Orphan Stones’ clamouring to be led back home.
But they are not alone… and the sinister Black Shade is not the only thing dogging their heels as they blaze their customary trail through the signs, seals and sacred sites of old Albion.

The unofficial re-siting of an ancient stone is viewed in a rather negative manner by the authorities. Ben has been arrested and the other two birds have flown.
Heading north, Don and Wen follow the whisperings of ancient stones carved with enigmatic symbols, unaware that they are being followed.
Their journey takes them through Cumbria and into Scotland, visiting ancient and historical sites, whilst piecing together fragments of the secret and magical history of Albion. ” …to the Ogham Stone of Fergus mac Roigh

Then to fast for three nights and three days…”

A Hag Load of Lard

The tyres of the Silver Bullet screech like the death throes of a thousand pigs… her torso pitches and rolls and then rocks uncomfortably, eventually settling to a wobble as Wen just about makes the corner, takes it and then straightens her up.

“…And a chance to gather our thoughts.”…

The gathering was as warm and full of friendship as always and the evening went well, though it ended in good time as Don and I needed to find a hotel for the night. Between the uncertain health of the car and the even more uncertain and unseasonable weather, we haven’t booked anywhere in advance, so we set off in the general direction of Chester, with temperatures plummeting.

We feel Chester, at least, is attainable, even if Scotland becomes an impossibility. It doesn’t look promising and we are half expecting to have to return to the Field of Sheaves and abandon the trip. If that is, we can get back across the hills with the snow. It is that or head south…

The roads were getting dodgy so we checked into the first place we found… right under the landing path for Manchester airport.

…The contribution tin is closed and locked so we leave our gold pieces on the top of the lid.

“Too early even for farmers,” smiles Wen grimly.

We move naturally into ritual mode as we approach the maw of the recumbent circle. So much has happened since we were last here, although we have still not made it up to Fin Cop as instructed.

“Have they gone wrong? We don’t yet know that for sure. We just need to know what to do!”…