“…is that?!”
I immediately went into ‘there has to be somewhere to park’ mode. You don’t just drive past a humungous mound without stopping…not when it is so very obviously man-made. And especially not when there are two of them. And in an urban cemetery, of all places! We have had a bit of trouble with mounds in the past, especially on workshops. They have a tendency to go missing. But here, we found ourselves with a brace of the things and completely unexpectedly too. 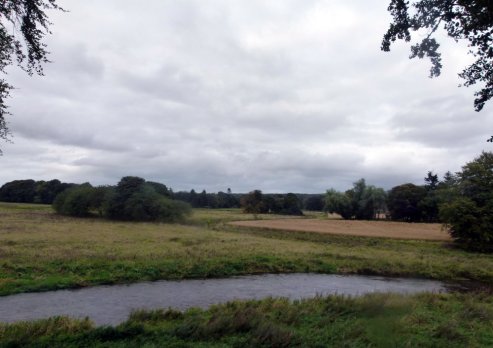 We had just said farewell to our companions after a fabulous weekend and were simply planning on getting back to the hotel, relaxing for a while and starting to process what we had seen. We wanted a fairly early start the next morning as we had a long way to go… and were fully intending on being sidetracked several times. I also had a road through the Scottish Highlands in mind that I have not driven in many a year and which is just too glorious to miss. So, instead of sensibly heading south towards home, we would first be heading north to Inverness. An early night was in order. 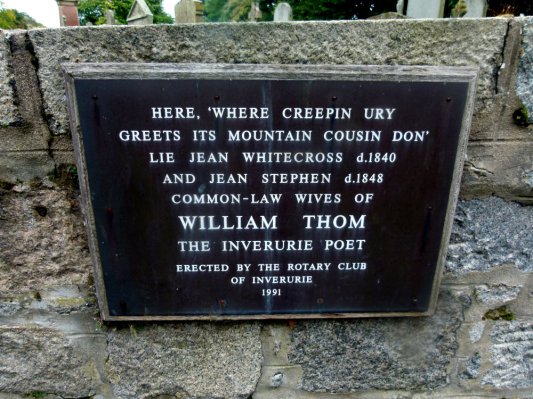 But, ‘back to the hotel’ went out of the window as we parked the car and read the signs on the cemetery wall and gate.I was rather intrigued by the memorial to the wives of William Thom. The surname has a certain significance to those with an interest in ancient stone, but this Thom was a handloom weaver from Aberdeen who wrote poetry in the vernacular. He was born around 1800 and died of consumption aged forty-eight.
Then another sign caught my eye.
“Ooh, Pictish symbol stones too!”
“Bugger,” said my companion, reading a notice. “They’ve moved them.”

It was a shame. The information boards showed them to have been rather beautiful… especially the running horse. I would have liked to have seen them. The stones are around fifteen hundred years old and were found re-used as part of the building materials for the medieval church that had once stood here.

The information board showed the designs on the stones. Some of them we had just seen at Dyce, like the crescent and V-rod and the double circle and Z-rod, for which no known meaning has been found but which seem to be amongst the most common symbols. The double disc reminds me of a cloak clasp. Perhaps it was a symbol of lairdship? Were these stones boundary markers for the lands of the local chieftain, or perhaps grave markers for burials as the official line suggests? Or was there some deeper meaning behind them? Both could be true and the combination of symbols might also be a significant message to those who could read them.

Luckily, though, the mounds were still there…they are a bit too big to move. We wandered through the cemetery, to the path between the two mounds, watching squirrels play, seeing a dark shape dart across the grass and rather disconcertingly disappear and saying hello to an elderly gentleman who also promptly seemed to disappear. I have to say, it was a little odd. The graveyard occupies a the land bounded by the river, close to the confluence of the Don and the Ury. Two mounds, one huge, one about half its size, rise on either side of the path. We climbed the smaller one, now blanketed in moss, sporting trees and a good crop of toadstools. I had noticed a gate and a spiral path climbing the taller of the mounds, around the other side, so up we went.

The two mounds form the Bass of Inverurie, said to be a motte and bailey castle. The larger mound, the motte, would have held a timber fortification, while the other, lower mound, the bailey, held stores, stables and workshops. They were joined to by an oak walkway whose timbers were found in 1883. The site would have been well defended, rising above an encircling ditch in the marshy ground in the loop of the river. The design suggests the castle is around nine hundred years old and it was a seat of royal power, administered by the de Lesselyn family, Hereditary Constables of the Garioch. It may well be at the Bass that Robert the Bruce lay ill in 1308 after the Battle of Barra. 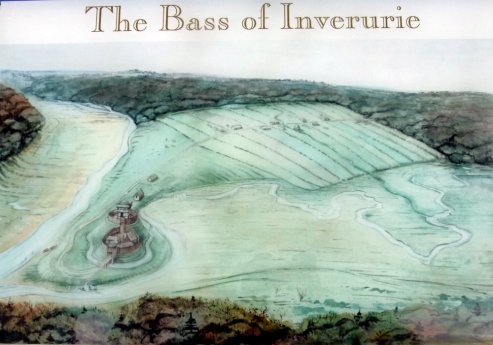 Not all these ‘Norman’ mounds though are Norman. Some that had been thought to date back only a thousand years have been found to be much, much older. They were centres for gathering, ritual and justice and may have been seen as sacred, like the great hill of Silbury itself. Not all have been dated by modern methods and it would not surprise me if this was one of those older hills, taken over by a later power. My reason lies on the horizon, where the two peaks of Bennachie, with its ancient presence and history, echo the shape of the hills.

It was still raining as we turned to descend from the mound, but the day had a final surprise. Once again we saw the double disc symbol, but this time, in a rather more modern and wholly unexpected form… World within worlds… and somehow, that seemed about right. 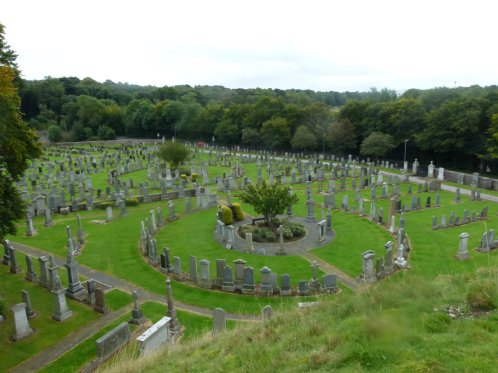