As the tides would not allow us to cross to Holy Island before eleven, three of us were on the road early to visit a stone circle. It had been a late decision… very late, in fact, but as Gary lives a flight away in the Czech Republic, the chance to spend a little extra time together was too good to miss…and for that time to be in the ancient landscape. The others would have been long abed before we decided it was the right thing to do, or else they might have joined us as we drove out towards the Singing Stones of Duddo.

We had been there almost exactly a year before, on our way to the Silent Eye’s workshop weekend in Inverurie, organised by our friend, Running Elk. We had told the stones that we would be back one day, but had not expected that our return visit would be quite so soon. Duddo, though, is not only the best of the stone circles in the area, it was barely out of our way to the morning’s rendezvous. 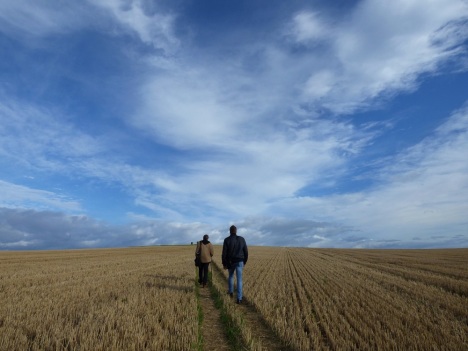 There is a fair walk to the Four Stones of Duddo, which is their other common name. There are actually five, and were originally seven, but you almost have to be amongst them before you can see the shy fifth. As we walked across the fields, the way seeming much shorter as we strode out with our long-legged friend, we told him of our previous visit, but not too much… the beauty of these places is in feeling them for yourself.

I can never look at the approach to this circle without thinking of Tolkien’s description of Amon Sûl, Weathertop, whose name in the elvish Sindarin means ‘hill of the wind’. He describes it as being crowned with teeth, and I have to wonder if Tolkien visited Duddo… and if it is the wind through the stones that has made them sing for well over four thousand years.

As we approached the threshold of their space, surrounded by the gilded remains of the summer’s harvest, a cloud of butterflies and dragonflies rose up and around us, in an unexpected moment of pure magic. Impossible to capture on camera… and perhaps a gift that needs nothing but memory, I have never seen anything like it before… and it happened again, a little while later, as we left. 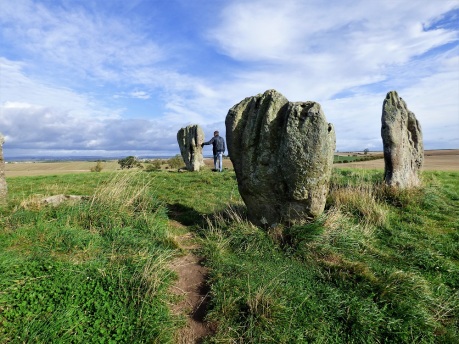 The weathered and grooved stones are much bigger than they first appear, dwarfing the human frame. They have a presence that goes beyond mere size, though and seems ‘dimensional’ in a way that cannot be measured, except in the effect it has on those who walk between them. The vast horizon extends full circle around the stones, fringed by the Cheviot Hills and frozen clouds streaked with rainbow-hued luminescence. It was a perfect morning. 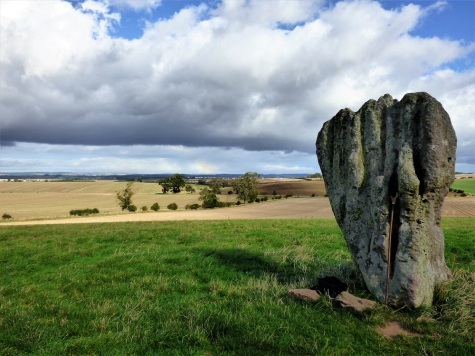 The presence of the stones took on a more tangible form as we shared a makeshift ritual, honouring the land, the circle and the Light of life. Such moments are impossible to share, they can only be experienced and their effects assimilated. Magic happens in its own way and its own time.

Reluctant though we were to leave the circle, we left in good time to meet our friends as soon as the tide withdrew from the causeway that would allow us to cross to Holy Island. If it hadn’t been for a peloton of bike riders, we would have made it on time too… but a whole host of them was blocking the traffic on the narrow country lanes.

As it was, we were a few minutes late… but we missed the crowds and drove across the deserted, sea-damp path to Lindisfarne…

5 thoughts on “North-easterly: Sidetracked by Stones”