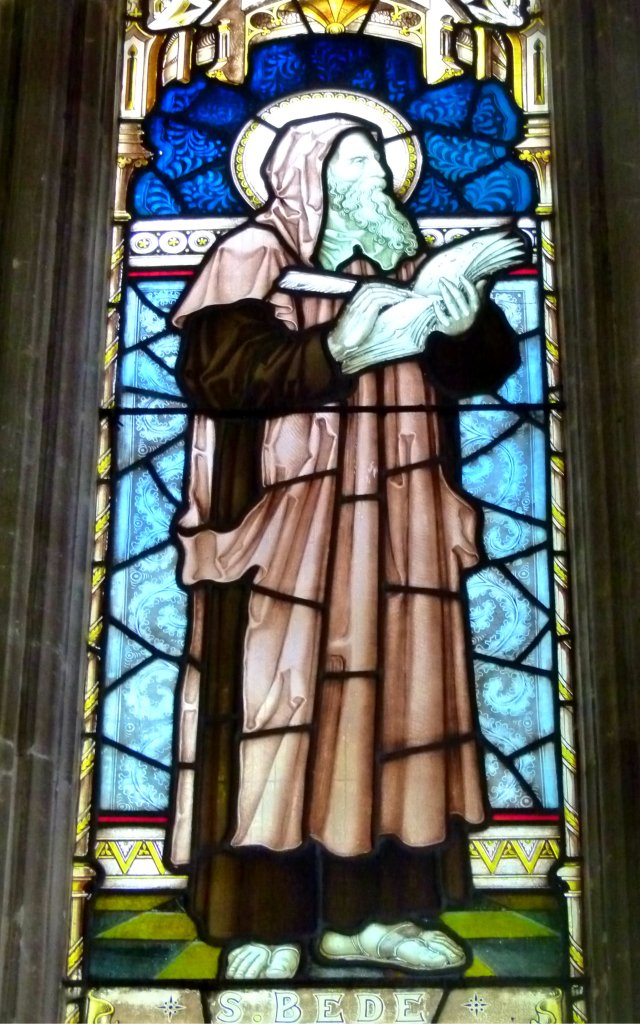 As churches go it wasn’t up to much, I have to say. It really did look like a factory to eyes more used to the lovely lines of mellow, Gothic stonework that exuded a sense of history. Our local parish church, on the other hand, housed several generations of my family in its grounds and light shone like jewels through the Burne-Jones windows. The dim interior always felt hushed and had that vague tang of incense and of course, the place meant something to me, as we only ever went there for solemn occasions. So the stark, naked geometry of 1930’s brick did not speak to me. Proper Art Deco style… well, that meant my grandparents’ home, full of vaguely Egyptian lines and interesting angles, overlaid with flowing symmetries… that was different.

When I was a little girl, on high days and holidays, the entire school would march, crocodile-file, in order to share a communal service in this ugly, red brick building. It was a long walk for small legs, and I retain few pleasant memories. My most vivid recollection of the place is the Christingle service at Christmas when even the factory-like edifice with its tall, whitewashed arches and echoing emptiness, took on a little magic from the candles, spices and warm scent of oranges held in the excited hands of children. The red brick angularity of the Church of the Venerable Bede just didn’t cut it and, with the unknowing association chain of childhood, to me the name Bede simply said boring.

So, you can imagine how I felt recently when the name raised its head again. My immediate reaction was one of dislike… nay, aversion! Older and a little wiser, I hope, I know that Bede is an important figure in the annals of British history… and especially religious history, which forms a major part of how the country was shaped. And of course, if you look at certain periods of that history, you really can’t avoid him.

Frankly, this whole Doomsday book is going a whole lot deeper than we had intended. No… not ‘the’ Domesday Book… ours, the new one currently nearing completion. While Don and Wen, the main characters in the books, maybe having a field day playing with ideas and symbolism, Stuart and I are doing the legwork, both physically and intellectually; rummaging through the archives of Albion, following ancient trails left by people whose very names are the stuff of legend.

Did I ever think I would want to read the Venerable Bede’s Historia ecclesiastica gentis Anglorum? Er… no. Not really. And what am I reading as a matter of choice at present? Yes… you’ve got it… and it is fascinating stuff.

The Venerable Bede was born c. 672 and died in 735… pretty much contemporary with the period we are studying and amongst a huge volume of work, wrote a history of the land through the eyes of the time. Yes, of course, there is a religious bias towards the Roman rather than the Ionian faith, and he’s not overly enthused by Penda, the last pagan king of Mercia either, though there is a grudging respect. Yet to be reading the words of a man who knew my corner of the country… the north… thirteen hundred years ago is really an incredible feeling…. “Britain, an island in the ocean, formerly called Albion….” Seeing it through his eyes brings legends to life; he wrote of history not the tales of the small folk, but there is much folklore running through his words as the beliefs of his time unfold across the pages that he wrote so many centuries ago and which speak to me now as if I was hearing the tales in the firelight of the world’s hearth… and who knows, perhaps I am.