There is a modern, central altar in Bakewell church that brings the service into the heart of the congregation, but behind it lies the choir and chancel and a world of woodcarving many will miss. It starts with the two carved chairs immediately behind the altar, but unless you know where to look, you will not see, for beneath the seats for choir and clergy is a superb collection of carvings.

The misericords are ‘mercy seats’, small shelves, often richly carved, that are hidden beneath folding seats. For centuries, church services required long periods of prayer whilst standing, these little shelves were designed to provide a modicum of support and comfort. The vast majority of misericords today are ‘modern’ affairs… and anything later than the 17thC is dismissed by experts as having no value. I beg to differ… they are superb pieces of craftsmanship and artistry. Not only that, but many picked up far more ancient themes and preserved them for future generations. Religious iconography, arcane symbols, strange creatures and even local legends and apparent humour are all found in the dim recesses of the choir stalls.

I had photographed a good many on previous visits and was determined to do a better job this time. On my first visit the entire choir and chancel had been wrapped in plastic to protect it during roof repairs… I had noted their presence but had been unable to look. On subsequent visits, the camera had not captured them clearly in the tranquil shadows. This time I would, if I had to, put the lights on… and even use the flash… both things I avoid as a rule. 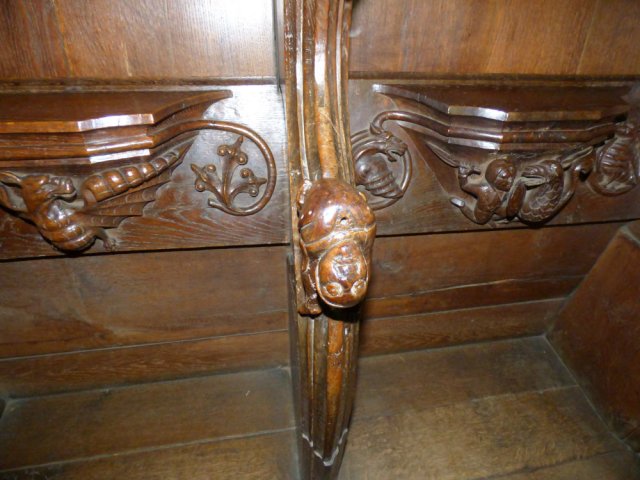 Bakewell church has a fine collection of carvings in her screen, reredos and choir. Most of the misericords date back only to the Victorian restorations of 1881. Three, however, are somewhat older, dating back to the 1300s. The carving is completely different… one could say cruder, but there is a strength and vibrancy in the time-blackened oak that the rich polish of the later carvings lack. Quite why such strange creatures should be carved beneath the seats we may not know for sure, but there is a case for the apparent demons being quite literally sat upon and kept under the ‘seat of prayer’.

There are may such carvings in older churches and priories throughout the country. When the seats are down and useable, they go unseen and unnoticed, just as the altar cloths and drapery often hides wonderful and ancient things. Some churches, knowing that many come to seek the art and history that lies hidden within, will kindly signpost where to look. Others do not… which is why, with the utmost respect, I make a habit of lifting the skirts of the church to seek what may be seen.