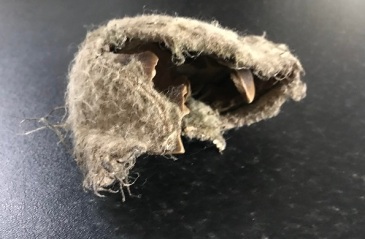 Dear Santa, remember that ball that I’ve had?

For several years now…it was getting quite bad…

And all that was left was some chewed rubber stuff,

A vague hint of curve and some once-yellow fluff…

I’ve taken good care to be so gentle with it

Not tugged it or torn, so the ball would forgive it,

Especially when I must ‘fetch it’ and ‘drop it’.

So there’s nothing left and the ball’s like a pancake,

It no longer bounces, it just makes my jaws ache,

But although she’s offered a dozen replacements

Not one of the balls could be any solacement.

“That’s it!” said my two-legs, “the poor ball has bought it,

We must find a method or some way to sort it!

We can’t have you mourning for months being surly

And awful depressed for a lost ball, my girlie.”

So, she disappeared and came back from the kitchen

To start doing something, and me, I was itching

To see what she’s doing with needle and cotton,

But she wouldn’t let me, ’cause sometimes, she’s rotten. 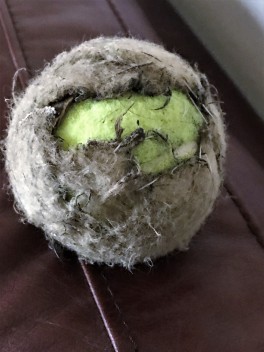 But when she had finished, I couldn’t believe it!

She threw and it bounced when I went to retrieve it!

It rolled at some speed when I batted a paw

And I had to go chase it all over the floor!

What magic is this? Must be some invocation

That manages to exceed all expectation!

I’ve known for a while that she’s not been herself,

But I didn’t suspect that you’d made her an Elf!

My ball’s had facelift and looks a lot newer

Of weeks spent in mourning there now should be fewer!

So thank you, dear Santa, for magic come early, 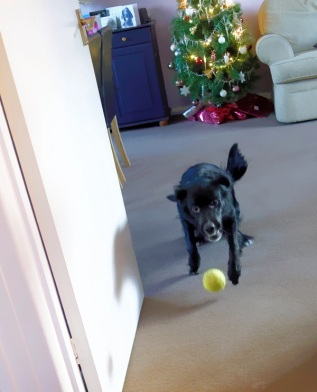 4 thoughts on “When magic happens…”