For once we had the forethought to ask the lady in the church for directions to our next port of call… the Holy Well in St Cleer. After our almost accidental visit to the Holy Well at Madron that morning, we felt we should see this one… and we were later to learn that the Mary Line runs straight through the well and the cross that stands beside it.

There is no saying how long this particular well has been venerated. The Christian rite of baptism and the shift in allegiance for the healing properties of water were a natural progression for many ancient wells where pre-Christian reverence had long held sway. Offerings have been found at our holy springs and wells going back to the earliest times, and there are thought to be over six hundred known sites still in existence here and a number of them have yielded offerings linking them to the Celtic reverence for the severed head. It is interesting, in that case, to consider that we still use the term ‘well head’… 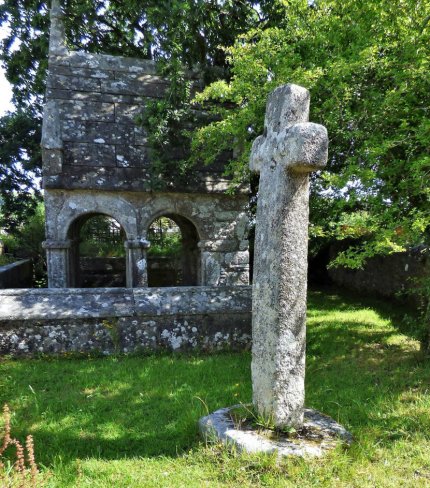 Researching St Cleer’s Well threw up some interesting snippets. It seems there is some debate about whether the village was named after St Clarus to whom the church is dedicated. Clarus’ Feast Day is November 4th, which is also the Feast of St. Clether, who is also known as Cleer and Clederus. St Clether was the son of King Brychan Brycheiniog, who ruled in south Wales and his brother was St Nectan, whose hermitage still exists, in one of the most magical and beautiful of glens, close to Tintagel, where King Arthur is said to have been born. Clether ruled the area around Nevern after his father’s death and fathered twenty sons. We had seen the memorial to Maelgwn, one of his sons… the Maglicu stone… when we had visited St Brynach’s church in Nevern. When St Brynach brought the early Christian message to his court, Clether abdicated and himself became a hermit. Perhaps St Clarus was not ‘St Cleer’ after all?

Then again, there is the possibility that the village was named for St Clare, the spiritual sister of St Francis of Assisi. She was the founder of the Poor Clares who had a religious house in the area to which the well may have belonged at some point. Most likely, though, is that the village was named after the Knight, Ingelram de Bray of St Clair sur Epte, who built the new church in the village in 1250 when he married the heiress of the Manor of Rosecraddoc. It was Ingleram who first built a housing for the Holy Well, which stood until it was destroyed during Cromwell’s war on idolatry almost four hundred years ago.

The well was in ruins and many tried to carry off its stones, but wherever they were moved, they were always restored overnight by some mysterious force, or so the story goes. It is well known that the fairies frequent these places and you do not want to anger the Fae!

In 1864, it was restored… without removing the stones… by one Henry Rogers as a memorial to his grandfather, Reverend John Jope, who had been vicar of the parish for sixty-seven years. His household staff remembered him too and local legend has it that they would never kill a spider as they believed the vicar’s spirit to be present within them!

What remains now is the restoration of a fifteenth century well-house with a cross from the same date standing beside it. There was once a cistern and bathing pool too, though of these there is now no trace. The waters were reputed to be able to cure the lame, the blind and the insane. Within the well-house was a ‘bowsening’ pool. The term is obscure but probably relates to a nautical term referring to pulling something up with a hoist or tackle, which gives a hint of how it might have been used…

An old account of bowsening at another sacred spring dedicated to a Christian saint tells of how the person suffering from insanity would be violently pushed into the water a number of times, until the cold and shock subdued them. They would then be taken to the church where Masses would be said for them. If a cure ensued, the saint under whose aegis this was performed would get the credit. If not… it was back to the pool, and this would continue until a cure was assured, or until the poor lunatic died of his ordeal. 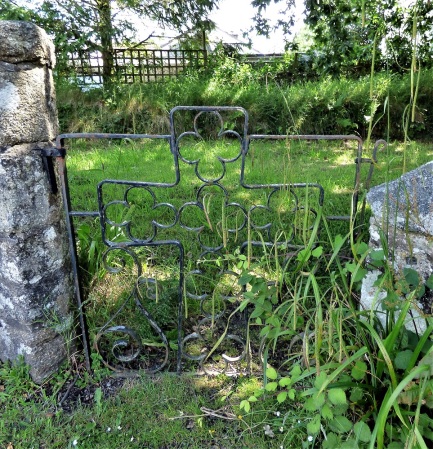 Thankfully, the pool was covered during its restoration and only relatively recently partially reopened. It is now kept covered by a metal grille, through which the clear water can be seen… at any time when the country is not suffering a drought. There was very little moisture in evidence when we visited, for which we are grateful as it means that our particular form of lunacy could not be cured…

9 thoughts on “A Thousand Miles of History: Seeking Sanity…”