We followed the Beadle in silence into the church, grateful for the history he was giving us about the place, as much for the information as for the fact that we had the chance to gather our wandering wits. I think we were both struck by the utter unlikelihood of the morning.

The church is beautiful… very simple and with much history tied up with the family of the Earls of Wemyss. The first thing we were shown was entirely unexpected… you don’t fall over sculptures by Antonio Canova every day … not in village churches anyway. There were other monuments, both incredible and discrete, including a simple plaque to Captain Hon. Walter Charteris, son of the 9th Earl, who was killed whilst serving with the Gordon Highlanders at Balaclava during the Charge of the Light Brigade in 1854. 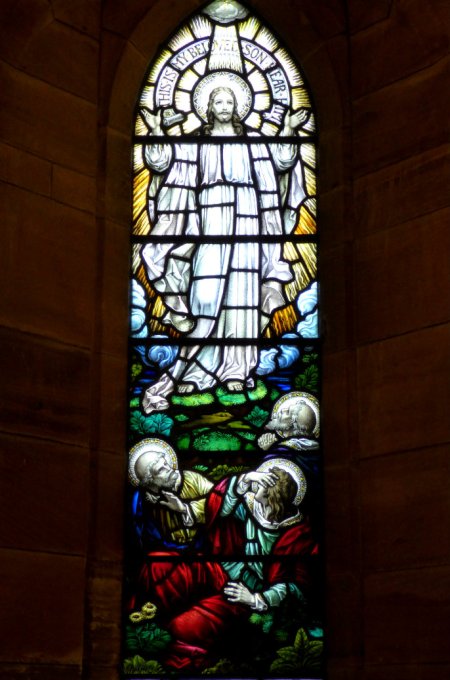 The windows, set deeply in the walls, are small jewels catching the light. Over the altar in the east the stained glass is by Edward Frampton, copied from the Sandro Botticelli painting of the Virgin Adoring the Sleeping Christ, which is in the possession of the Wemyss family. Other windows tell the story of the Life of Jesus. I particularly liked the Ascension… the arms, body and halo, with the light of the Holy Spirit descending, seem to echo the Celtic Cross above the altar. 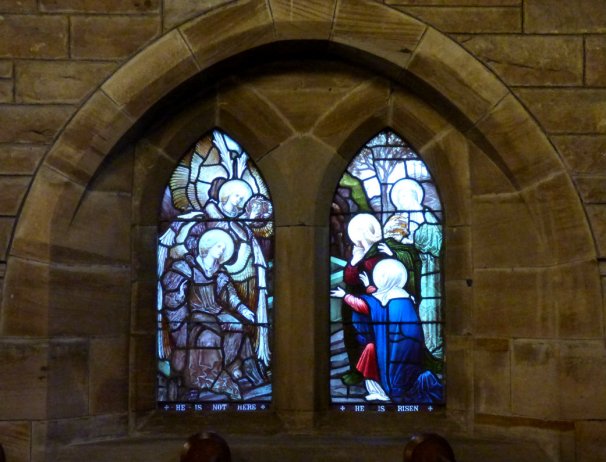 And then of course, there was the stone… just a fragment, and a replica at that. Found in a garden wall in 1863, it is so similar to the nearby cross at Abercorn (which we didn’t know about..) that it is thought the two may be the work of the same craftsman. The back shows the Aberlady Angel, the front four seabirds with their necks and legs entwined forming the familiar ‘Celtic’ geometries. It is strikingly similar to a design in the 8th century Lindisfarne Gospel and may date from this time. Aberlady was on the pilgrim route from Iona to Lindisfarne… Holy Island where we were heading later that day.

Because of the Abercorn stone and some of the others that we had seen like Ruthwell, it had been possible for a master stonemason Barry Grove, to reconstruct the cross. We could see it in the memorial garden, the Beadle told us as he locked the church door behind us. He was sorry to hurry us… he really shouldn’t still be there… but he would show us the vestry in the base of the bell tower… The low arched ceiling with its trap door to the loft covered a tiny room. The church pewter sat on the windowsill below my favourite of the stained glass. The Beadle showed us the ‘dead locks’… huge padlocks used to secure the newly dead and told of older Beadles sitting guard over the graves, up in the tower, armed with guns to protect the dead from the bodysnatchers.

I have said before that we generally prefer to have the little churches we visit to ourselves, Sometimes we fall lucky and meet someone who knows and loves the old buildings, sharing their knowledge and their affection with warmth and simple pride. These meetings are as much a gift as any of the treasures we fall over. We took a reluctant leave of the old gentleman, following his instructions to see the oldest tomb in the churchyard before going to the memorial garden to see the reconstructed Aberlady Cross.