For once, I wished I wasn’t driving. I wanted to stop every few minutes and get the camera out… the whole area is very beautiful, but the road between Nevern and our next stop in the Gwaun Valley is exceptionally so. We were driving in a convoy though and it was fairly obvious that, had we stopped, we would be hopelessly lost. The narrow roads winding over hill, down dale and through the trees was not a place for loitering… and anyway, our guide had promised us cider.

We had been told to expect an unusual pub and that was a fair description in this day and age, when even the old inns are being taken over by chains, decorated in bright colours and given a modern twist. Bessie’s, officially known as the Dyffryn Arms, looks more like a home than a public house. Owned by the same family since 1840, Bessie herself has been serving ale through the serving hatch from the kitchen-cum-bar for over thirty-five years.

The cider was excellent… and much appreciated after the long, hot day. We sat outside by the side of the lane, surrounded by honeysuckle, bees and wildflowers. The rest of the residents of the tiny hamlet also seemed to be sitting on their doorsteps enjoying the early evening sun and a companionable hour was passed. 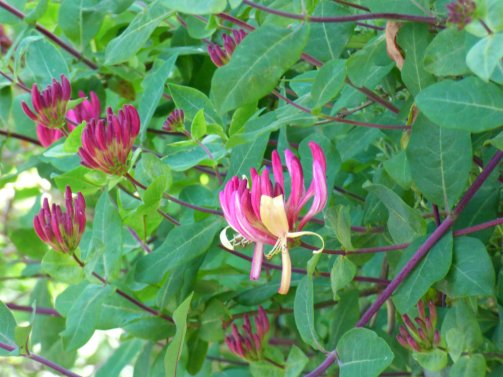 We had been obliged to forego our final stop of the day. The illicit cream tea and the ascent of Carningli had taken longer than anticipated out of our limited time and we had a table booked for dinner at a little place in Porthgain. It wasn’t the only place we would have liked to spend longer… not the only place there would not be time enough to see. All the more reason for a second workshop weekend in the area at some point…

The light was fading over the sea as we wandered down to the little harbour after dinner. Porthgain is a strange place, set, like many coastal villages, in a cleft between the hills. The landscape is scattered with ruins of the once prosperous slate mining industry that was based here in the 1900s. When slate mining ceased to be as lucrative, Porthgain survived by turning to making bricks from the local dolerite stone. 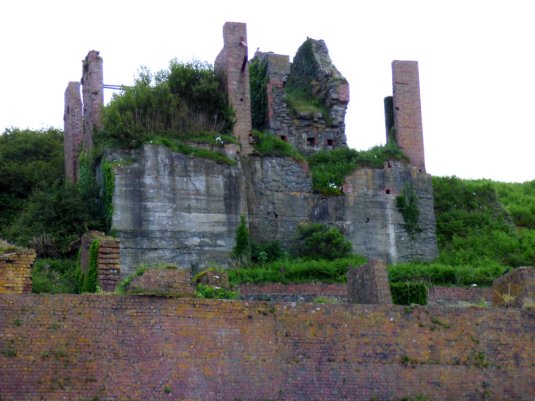 The ruins of old industry give the place a unique and sombre air at first glance, yet on reflection, they show the evolving life of a village and seem a fitting part of the landscape that is ever-changing and ever changed by the sea.

We sat for a while, watching the opalescence over the water lose its lustre and face to the grey of nightfall. It had been an utterly amazing day and we had seen and felt so much… from ancient stones to mountain tops, from homely pub to peaceful church. It beggars belief that you can, without appearing to rush, stretch time to include so much in the daylight hours of a single summer day.

It gives an odd sort of insight into how our ancestors were able to achieve so much…rising with the sun and living by its light. The art on display outside the gallery seemed to inspire such thoughts. I am not one for buying souvenirs, but I know that had I the resources, I would have taken one stone home with me. 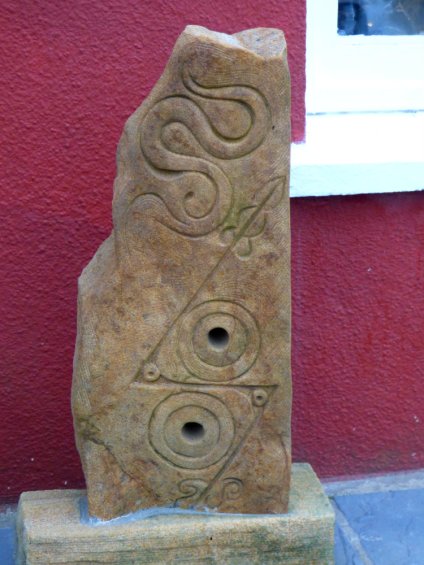 The next day would be our last in Wales and we would be close to where we were staying in St David’s. We were all hoping for another of these beautiful days as we headed back to our hotel for the night, just as the birds were coming home to roost.