“What are those? ” The bumps in the fields as we drove down the narrow lane looked suspiciously like the remnants of early occupation.

“They look like earthworks…” It would make sense, the little church we were heading for was old and the site upon which it now stood even older. Many of the best of these old churches were built upon ancient sites. Sometimes, we believe, it was because they were sites of ancient sanctity and that is where the local folk chose to honour this new face of divinity. Sometimes it was the priests and lords who chose to take over the old site, following the directive from Rome to occupy them so that the inhabitants simply came to their accustomed sacred place and were converted almost by default.

Once a church was established, it was not unusual for subsequent generations to demolish and rebuild on the earlier foundations and many of our thousand-year old churches have been places of worship for a great deal longer than we know. The current church at Kilpeck was built around AD 1140. It stands on what is thought to be the site of a much older, probably Saxon church and within a raised, oval churchyard that is typical of even older, Celtic churches. The Christian tradition in the area dates back at least as far as the late Roman period, and the Romans left Britain for good in AD 410. There may well be Roman remains at the site and there has been some suggestion of it being a megalithic site before that, although nothing has yet been found to definitively confirm this theory. 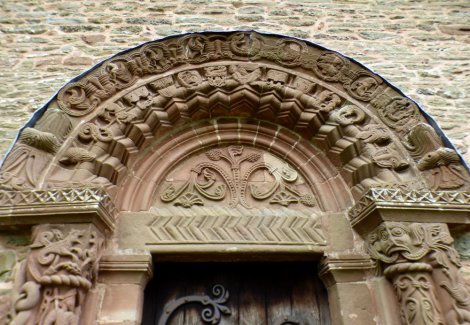 We knew it had a few special things to discover, but we had not done our research beforehand. We seldom do, preferring to find what is there without preconceptions and without spoiling the sense of awe and surprise. The research comes later. Even from a distance, we could tell that the red sandstone church was unusual with its curved apse, though, to be fair, the stonework looked in such good condition that we feared that it would prove rebuilt and over-restored. Still, we had largely come to see one small carving, so the rest didn’t matter much.

“Er… look’s like there’s a castle next door….” I parked the car. We grabbed the cameras and got out.

“What’s left of one anyway. On a mound.” Now, these old mounds are a bit of a mystery. Most of them are listed as ‘Norman, motte and bailey’, but many are not in defensible positions, nor do they have a large enough summit to be anything more than watchtowers. 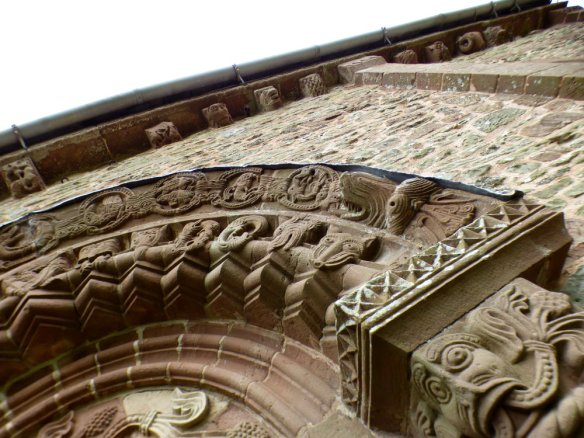 Many indeed, stand near exceptionally defensible positions that have been pointedly ignored by their Norman builders. And, with the known mounds of extreme antiquity and unknown but obviously significant purpose, like Silbury and Marlborough dotting the landscape, we have wondered if the siting of these ‘motte and baileys’ was not more to prove political supremacy by the invaders, by taking over and placing their stamp upon important sites, than a purely defensive measure.

But there we were, speculating again already, and we hadn’t even left the car. We walked up to the church and my jaw dropped. The door was surrounded by carvings, so crisp, so clear and fresh that they could have been done yesterday. Yet the board by the nominal of the little church of St Mary and St David had said that they were all original.

“They can’t be original. They must be restored….” It didn’t seem possible… but they are. Nine hundred years old and almost pristine.

“It’s extraordinary.” I forced my mouth shut and switched on the camera. It didn’t matter where you looked… the doorway kept on revealing itself. Dragons curved over the arch and up the columns. Beak-head masks of strange, fantastic creatures looked down, framing a tree of life. Foliage held twin birds… a disgorging Green Man… more entwined and sinuous dragons, figures both human and angelic… it was incredible! 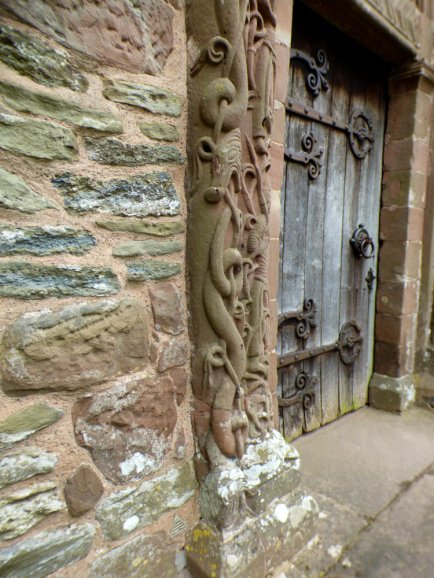 There are birds and beasts, a manticore and a basilisk, there are serpents swallowing their tails and the human figures, looking surprisingly modern in their trousers. It is all original. For some time it was hidden beneath a wooden porch, removed in 1868 to allow the door to be seen as it was intended by its makers. A narrow lead strip was inserted to protect against water running off from the walls a hundred years later. Other than that, the door is as it has always been… incredible. And that was just the door. 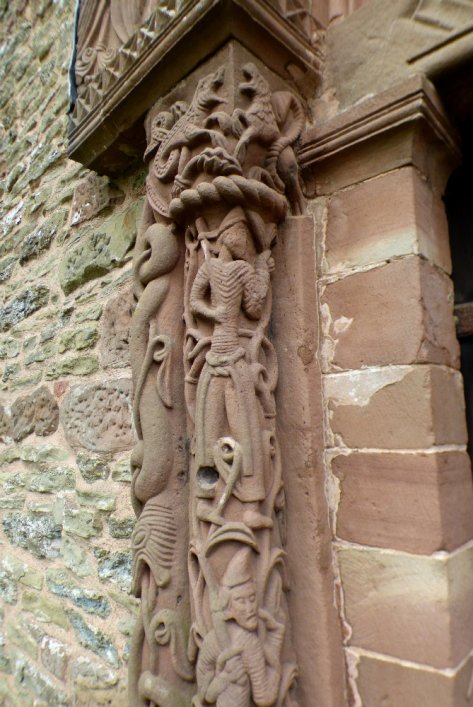 “Look up.” Right above the centre of the door, the symbol of the Agnus Dei, the Lamb of God, formed one of the corbels supporting the roof. That was one of the few we would recognise… the rest were to prove much, much stranger….