‘Pushing through the market square, so many mothers sighing…’

Following the death of David Bowie on the 10th of January 2016,

a groundswell of opinion surfaced in Aylesbury

to celebrate his art in a permanent way,

in recognition of his connection with the music club, Friars.

and ‘Ziggy Stardust and the Spiders from Mars’

at the club in the early seventies

and formed his band in the rehearsal room of the venue

The full history of David Bowie and Friars, Aylesbury,

has been chronicled in

On the 16th January 2016, a petition was started to celebrate

Bowie’s legacy in the form of a statue for the town.

Andrew Sinclair was commissioned to create the work.

Bowie as Ziggy Stardust circa 1973, 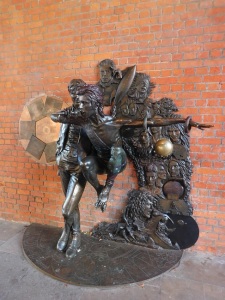 Behind these two figures can be seen many of

the characters David portrayed throughout his long

Funding is still required for this project.

The sculpture is augmented by an audio system

which plays one of Bowie’s tracks every hour

on the hour and a webcam

allowing the sculpture to be seen 24 hours a day. 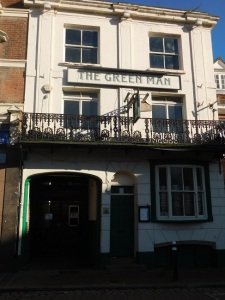 still occupies the site of the Friars music club, Aylesbury.

The alleyway to the left side

is the former entrance to the club.