Wreathed in mist and roses, the Mother greets those who visit the sacred spring of St Non. The little shrine to the Virgin was erected in 1951 when the Passionist Fathers restored and rededicated the spring, as if to leave those who walk the cliff-top path in no doubt of the deity from whom the healing waters flow. Me, I was having grave doubts about such a claim of allegiance.

The legend tells that St Non gave birth to her son, St David, in the field beside the spring. St Non was the daughter of a noble house who had been ravaged and left with child. The healing waters of the spring began to flow when the babe was born, bathed in light, while a thunderstorm of biblical proportions raged around the mother and child, protecting them from harm. I have to wonder what a pregnant noble lady was doing alone, in a storm on a cliff top, when her time came upon her. As pious as she was, eating only bread and water throughout her pregnancy, surely she would have headed for church or convent to seek aid and sanctuary? Especially as, in Welsh, her name means ‘nun’. If that was the whole story, somehow, it didn’t add up.

Many of the holy wells are connected with female saints. The symbolism is fairly obvious… the waters of life are a feminine preserve. They were places of veneration long before Christianity came to these isles and stories are remembered in the folk record of goddess and fae alike at such places. Perhaps St Non was heading for the healing waters as the pains of childbirth came upon her? Perhaps the well was already there and was ‘born anew’ in the Christian faith at that point. It was a thought.

The waters of the spring are reputed to bring healing and were considered miraculous. They have been visited by pilgrims and those with faith in their powers since time out of mind and the clear spring is one of the most sacred places in Wales. A cloutie hanging limp in the mist showed that the well still draws those who seek healing.. as did the small, unobtrusive offerings that were left there. Given the sanctity accorded to the place by the faith of its visitors, I felt bad about questioning the veracity of the story… yet there was no lack of respect for the faith of those who see its truth. Truth may wear many faces… not all of them factual… and all of them equally valid.

We each paid our respects in our own way. I will pay my respects to the outward form of any religion. My own faith sees no distinction between the faces worn by the essence of divinity that lies behind all the Names and stories. I recognise, however, the human need to grasp and sequester all that seems best and most sacred and call it our own. There are many instances throughout history where the sacred places of one stream of belief have been adopted by another. In our own history, the directive from Rome to the evangelising fathers was quite clear in that respect. Just beyond the shrine and the well, lies a small, fenced enclosure and the ruins of Capel Non, the chapel that was built on the spot where the saintly lady gave birth to her son. Legend says that it was built upon the site of St Non’s house… which might explain why she was up on the cliffs alone at that time…except the ruined chapel stands right in the middle of what appears to be a Bronze Age stone circle…

Maybe that was why St Non was wandering the cliff top in a storm… seeking the shelter of a sacred place older than the Christian faith by a thousand years or more. Or maybe the story has absorbed an older tale and the Christian saint has evolved from a Celtic goddess whose ‘house’ was the stone circle. That too is not unknown and the parallels between goddesses and saints, such as Brigid for example, have been well documented and argued. For me, there is a beauty in that… a simple continuity of faith that defies the political machinations of sacerdotal statesmen. Those in power may have sequestered and renamed the stories at the heart of the old ways, they may have laid the veneer of their own religion over the deities of the Old Ones and built in riven stone within the ancient sacred places… yet their essence remains unchanged and draws those who seek, however their belief is framed. 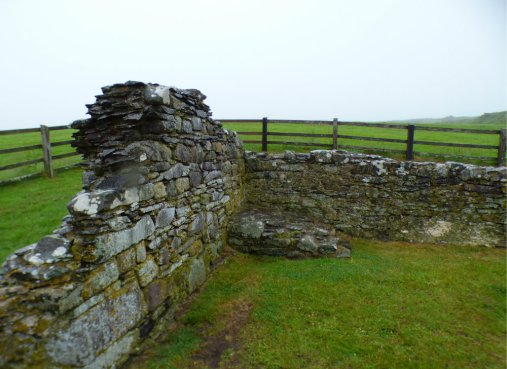 A small step within the ruined chapel marks the spot where the altar once stood. Like the ancient alignment from Pentre Ifan to Bardsey that, according to Robin Heath marks north as a sacred direction, the chapel is unusually oriented north-south, rather than the traditional east-west, with the altar in the north. Little else remains of the chapel built where the patron saint of Wales was born some fifteen hundred years ago. In one corner propped against a wall, is a stone slab, carved with a symbol that has become known as St David’s Cross. The stone, thought to be perhaps twelve hundred years old, was found at the site. It may have been either grave marker or altar stone and bears the symbol of the Cross within a Circle… which seems very appropriate here. 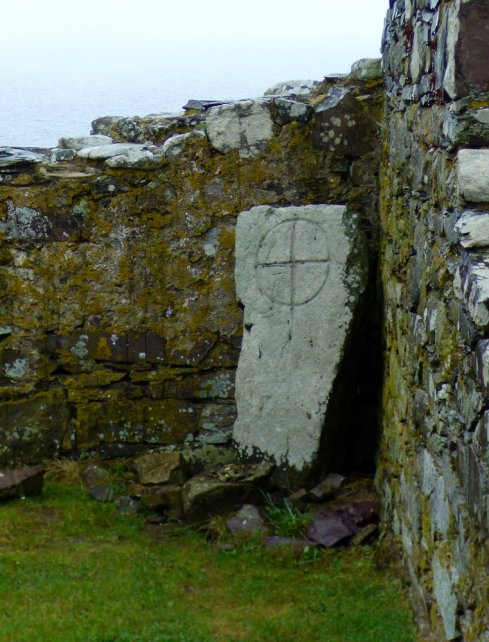 The Cross immediately explained the simplicity of the identical Stations of the Cross in the more modern chapel of Our Lady and St Non… they were replicas of the stone, carved in wood… ‘the living and the dead’ brought into the worship within a holy house…another link with an ancestral faith.

The ruined chapel and holy well were once sought by the feet of many pilgrims. The chapel is one of the oldest Christian sites in Wales and perhaps the most sacred. Here, where the stones of an ancient faith encircle those of the new, there is neither ‘living’ nor ‘dead’, only a peaceful recognition of the endless round of humanity’s quest for understanding. 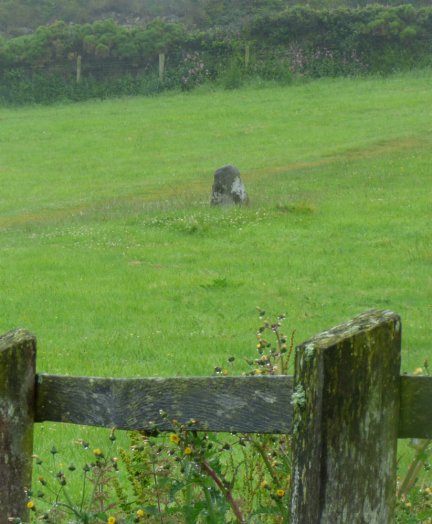