We were up early next morning and were cheerful about an email we’d had, telling us that the friends we had found over breakfast on our first morning in Scotland would be joining us for the December workshop in Derbyshire. We had talked about leys, geometry and dragons and left wishing we had more time to talk. And now, once again, we were ready to leave straight after breakfast… which just about left us time to wander up the through the marketplace to Holy Trinity church. It stands just outside the gates of Skipton Castle, looking down the length of the main street. We would have nowhere near long enough… as had been the case everywhere on this trip… but it would be enough to see what was hidden within the golden stone, still wearing the dark traces of Victorian industry. 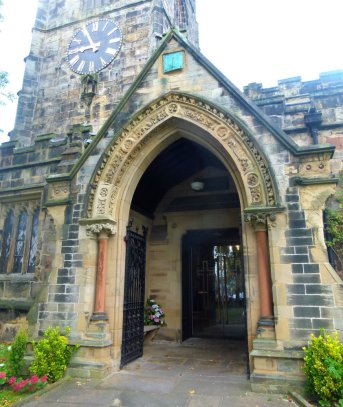 There was always a close association between secular and religious power and it almost seems as if the positioning of the church sends a whole series of messages to those who approach the castle gates. Was the castle saying that the church was under its protection or was the church giving its blessing to the denizens of the castle? Or were they simply presenting a united front and saying, ‘here is power…’?

The church would have been a wooden affair to begin with, built to serve the early incarnation of the castle almost a thousand years ago. Around 1300, the present church was raised and later extended. As with so many of our ancient churches, the traces of time are still visible in altered doorways, rooflines, and the general evolution of a building at the heart of a community.

The church was damaged in the Civil War, losing much of its glass and, until then, its interior was decorated with medieval wall paintings, of which only the hand of Death now remains. Most of our wall paintings were lost to the dictates of Cromwell. As if that were not enough, the church was struck by lightning in 1853 and again in 1925. Yet, as you walk in through the doors, you are confronted with something that seems both curiously whole and just as it should be.

The first thing you see is the original font; plain, unadorned and as old as the church itself. Above it hands an ornate Jacobean cover, carved at around the time the first British colonies were founded in America. Behind it, the base of the tower has been opened up to create a memorial area, flying the colours of the Duke of Wellington’s regiment. A board commemorates the dead of the WWII, while the window pays tribute to those who lost their lives in the Great War.

In contrast to the communal service represented by the memorials, is a curious, recessed window in the wall of the north aisle. This is the only access to a cell once occupied by an anchorite, a hermit whose felt called to serve his God and community in a very different way. The anchorite would enter the cell and be voluntarily walled in, to spend the rest of his life in prayer and offering guidance to those who sought advice. Food and water would be passed in through this window once a day and through it the anchorite could see the altar. I liked the information panels, framed and discretely dotted around the church, each with a little history and a modern gift of advice, designed to bring a conscious spirituality to modern living, rather than requiring adherence to any given religious path.

It is a superb church, with far too much to see and contemplate in the meagre hour we had available. It is another to which we will definitely have to return. Very often, our first visits are little more than ‘reconnaissance’, noting whether or not we need to explore further. Sometimes, though, when distance is a factor, we know it is unlikely that we will get chance to revisit…and we prefer to visit each church or site several times in order to get to know how they feel. So we photograph everything, systematically, from the carved heads on the arches to the bosses on the ceiling. In Skipton, though, there was simply too much, even for that.

The most striking thing about the church is the colour. We have been lucky and seen some incredible places, from the simple village chapel to the most magnificent cathedrals… yet I don’t think I have ever seen a place so vibrant as this one.

The windows alone just glow with colour. So much so that it is difficult, when you stand in front of them, to see them as anything other than complex jewels. Focussing on the subject matter, the symbols or the artistry and maker, is almost impossible. Yet many of the subjects are unusual and some have acquired a special meaning for us on our travels, like the Simeon window, when Jesus is presented at the Temple as a babe. 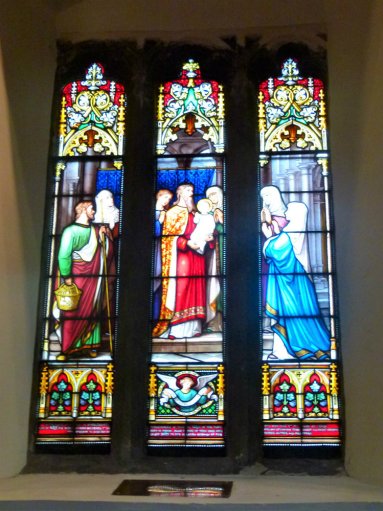 The church was much restored, following the Civil War, by Lady Anne Clifford of Skipton Castle, in the middle of the seventeenth century. Her initials and other family motifs adorn some of the windows. One appears to say ‘follow reason’ and yet, with the armed fist and spear points, as well as the ambiguity of the French itself, it seems to be suggesting that ‘might is right’ … which would fit well with the origins of both castle and church, both begun by the conquering Normans. 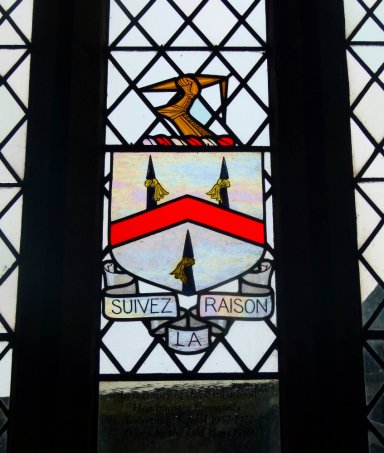 Most of the glass, though, was replaced in the nineteenth century. There are some recognisable makers, including Kempe, but in all honesty, most of it seems to have been made for no more reason than as an excuse to play with light. The colours are brilliant and jostle with each other for supremacy, but even the colours have stories to tell.

In the Middle Ages, there was a language of colour…another of those symbolic, pictorial languages whose keys we have forgotten, or think we have. Much of that language was continued in both the liturgical colours and in the design of stained glass windows, where shapes, colours and geometry often convey more than meets the eye.

Green denoted fertility, growth, freedom and hope. White is the colour of purity, chastity and innocence, where black suggests fear and death. Brown was the colour of the earth and our closeness to it in humility. Courage, as well and its counterpart as flame, was orange, while yellow is the colour of renewal, a springtime colour that is used at Easter. Blue represents divine Grace and is worn by the Virgin, while purple is a royal shade. Red is the colour of blood and represents the martyrs. It also represents the power of God and the flame of the Holy Spirit and is used at Pentecost. Looking at windows with an eye to their colour can tell you as much as the lines of their pictures. 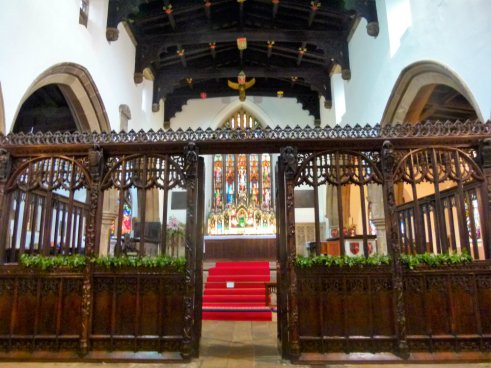 But it is not just the windows that are brilliantly coloured. The finely detailed rood screen, carved in 1533, was probably once painted as brightly as rest of the church. The bosses on the roof, also sixteenth century, were repainted in the twentieth century, making their details once again visible against the dark oak beams.

The reredos…the carvings behind the altar… have also been repainted. They should look garish and probably do if taken on their own, but taken in context with the rest of the painted church, they simply serve to recapture a vibrancy we seem to have lost with our love of plain marble and polished wood. While modern tastes may be more restrained, there is a real energy and life about a church where colour is embraced.

There is also a peculiar beauty. Especially when you think back to older times when the majority of the worshippers were people whose daily lives were touched with the greyness of poverty. The dyes that created such brilliant colours would have been beyond their means and those who wore them would be marked out as both noble and powerful.

You have to wonder if that is one reason why the churches employed colour. It must have engendered a sense of awe. But in an odd way, all it does is bring sunlight and nature into the church, for every colour thus employed is worn by the flowers of the fields.

To either side of the altar, there are tombs. These too are brilliantly painted, though have no effigies on their polished marble slabs. They are the tombs of the Cliffords and their story is displayed in photographs and documents on the black and white chequerboard of the floor. That floor also has stories to tell… During the renovations that followed the lightning strikes, gas was installed for lighting and heating and the raised temperatures raised the dead in a most unpleasant way; the stench was such that the floor was lifted and a concrete slab poured to seal the dead in their crypts. 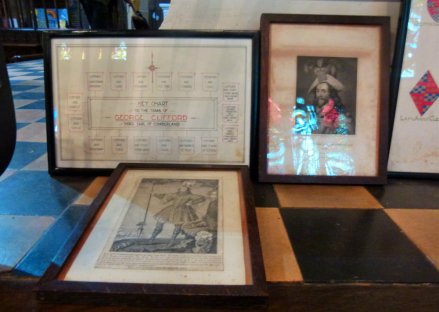 Beside the Clifford tombs is one of the most glorious windows we have seen. St Michael is slaying a rather accepting and multihued Dragon… the best dragon we have seen depicted to date. It seemed like a rather-too-appropriate gift after the recent news about our friends. The window is a memorial to a local schoolmaster, J.B. Rayson. We do not yet know the maker. The symbolism of that window alone is going to take us a while to unravel…and if anyone knows what the Hebrew inscription is, I’m all out of ideas, unless it is the same as the Greek, which is, I believe, from Revelation 22:2: “…the tree of life, which bare twelve manner of fruits, and yielded her fruit every month…“.

The verse continues, ‘…and the leaves of the tree were for the healing of the nations.’ Before we left, I looked at the Bible on the lectern, as is our wont, and it was open at Isaiah… “How beautiful on the mountains are the feet of those who bring good news, who proclaim peace…” In light of recent world events and no matter what our path or faith, I think most of us would agree with that…