We had watched the swallows in the hotel car-park, marvelling at their mastery of the air and swift, graceful flight and delighting in the first, tentative flutters as the baby swallows left the nest for the first time. We have had some beautiful encounters with swallows, but this was special. You could feel the excitement as the babies tumbled gracelessly from their perch, expecting to emulate their parents and finding they had no idea what to do with their wings. They came to land in the most inappropriate places and I had been down and ushered one of the stranded babies out of the path of the cars.

One crash-landed on the little balcony outside the window and we watched, with some concern, its refusal to move at all. Still, it was a rare and beautiful thing to watch through a crack in the curtains as the parent birds flew in, hovering and flapping their wings, encouraging and demonstrating to the tiny creature just what it needed to do. 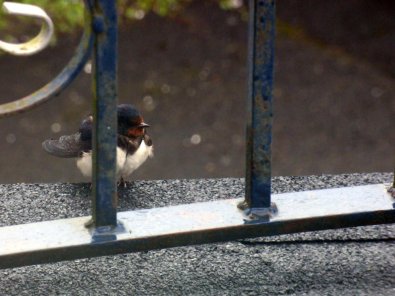 Night drew in and the baby was still there, away from its nest in the chill rain. I fretted, knowing that the parent birds were still caring for their chick, so there was nothing I could do but let Nature handle it. She has more experience than I where baby swallows are concerned. Even so, sleep was a long time coming.

Next morning, the first thing I did was peep through the curtains. It hadn’t moved. But it was no longer alone… one of its nest-mates had joined it and the pair of them huddled close in the pale light. Checking, every few minutes, I saw the parent bird return and try again to get them to flap their wings. Still nothing from the chicks, though now they were both perched on the edge of the balcony.

I took one of the bags down to the car and, as I returned, was treated to a sight that lifted the heart… I saw the babies fly. A faltering, clumsy flight… not very far… but soon they realised that they had no need to fear, only to do what they were born to do… embrace their gifts and be swallows.

By the time we had broken our fast, the little family was playing in the air. You could tell the juveniles by their flight. Where the parents swooped, sailed and soared in controlled arcs, the babies dive-bombed, rose vertically and tried their wings to the limit like tiny aerobats. It was utterly joyful to watch them play and brought a lump to my throat. This was bliss… you could just tell how proud of themselves they were. And they had made it.

Except, they hadn’t, not all of them. Beside the car, a tiny body lay, still with the yellow beak of babyhood. It did not need for the rain-soaked feathers to tell us that this little one had failed to fly… you can tell when life has left the body; the lights go out. Nature can seem cruel to our human hearts and emotions, but what is a swallow without flight? We had watched over his siblings as they were so frozen by fear that they had to endure the cold, lonely night. We had watched too as they faced their fears, embraced their true nature and found their destiny in the summer skies. Yet, we, for all our perceived dominance as a species, could not save a tiny swallow from its fate. 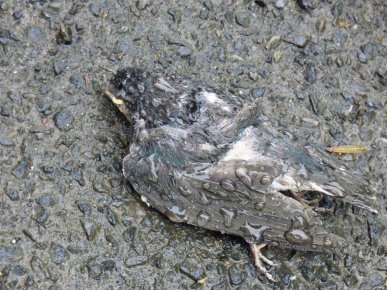 The little swallow had much to teach and, as we turned the car south towards our weekend rendezvous, I wondered how many of us are so frozen by our fear of embracing our true nature that we immure ourselves within greater and more complex fears? How many of us, encouraged by the belief of others, yet refuse to spread our wings? And how many die inside, too afraid to take flight into a beauty that is theirs alone? These tiny souls had taught me a lesson as they brought their own beauty into the skies.