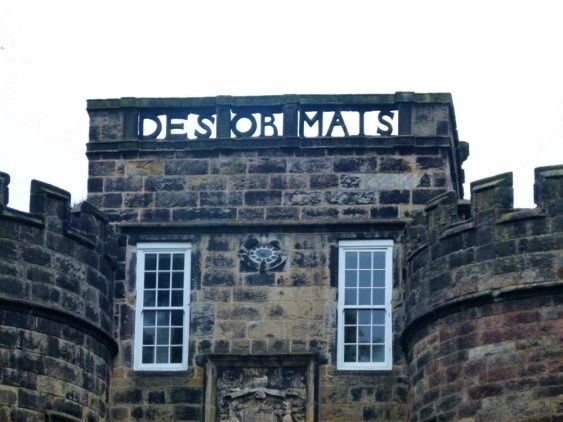 Desormais… henceforth… that is the motto over the gatehouse at Skipton Castle. It was probably the first word of French that I learned as a child and almost certainly the first I remember seeing written… even though it is written in stone. I had been there any number of times with my grandparents and, even though it is a castle and much younger than my normal preference, it does hold a fairly special place in my heart.

I had been looking forward to Skipton for a while, at least in some respects… it held the hotel where we would spend the last night of our journey. Not that I was in any hurry for the day to end. We had left the motorway in Cumbria and driven cross-country through the Yorkshire Dales, my home county. This was familiar territory and, although less majestic perhaps than Scotland, it is equally beautiful.

We had accidentally timed our journey to perfection… seeing a golden sunset over the Dales, but having just enough of the fading light to see us to our destination. From Pitlochry, through Aberfeldy to Fortingall and Glen Lyon, then on to Lochs Tay and Freuchie… it had been a very long and eventful day.

The hotel was an unexpected delight. We travel as economically as we can, but the old Georgian hotel with its chandeliers and gracious, curving staircase had been carefully modernised and I could barely wait to soak muscles stiffened by the long drive in the huge jacuzzi bath. 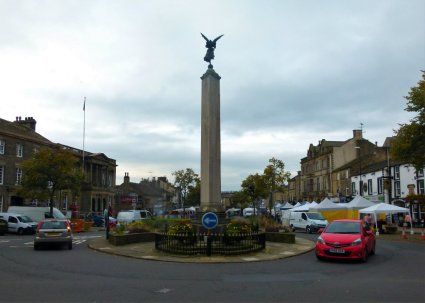 First, though, we needed to stretch our legs and Skipton is a market town, full of old and beautiful buildings and right on the doorstep of the moors. Because of that, it was once voted the best place to live in England. I like it too for its mix of ancient and modern, and the solidity and security of the architecture… much of it local stone.

We wandered up to the castle gate… long since closed for the night. It is about all you can see from the town, though beyond it I remembered the remains of the moat and the bridge across it. The rear of the castle stands on a precipice above Eller Beck and the stream and rock guard it well. Once again, I rather wished for more time… there would be none for us to visit the next day, as we were to meet a friend at Ilkley a few miles down the road. Even so, I remembered the great tree in the conduit court, the deserted chapel and the solar… the room with high windows that let in the light by which the ladies of the castle could sew and spin. Conduit court is so named because there is a cistern beneath it for collecting rainwater. Wooden pipes brought fresh, running water into the castle from beyond the gates, but in times of siege, the only water supply was the rainwater from the cistern.

Skipton Castle is a beautiful old place and possibly my favourite castle. It was first built in 1090 by Robert de Romille, one of the Norman barons who took part in the Conquest of 1066. The castle is one of the best-preserved of its kind and over nine hundred years of history can be traced within its walls. The original motte and bailey castle, constructed of earth and wood, was built initially to defend against incursions by the Scots, but was rebuilt in stone, little by little, to become a fortified home. The castle as it now stands is largely the work of Robert Clifford. He was granted the lands in 1310 and began rebuilding. He was killed four years later at the Battle of Bannockburn, but his family name is deeply entwined with Yorkshire’s history.

Desormais… henceforth… its suggests an eye to the future, an ambition to leave a mark on history. Yet to live for posterity is probably as futile as living in the past… the one unchangeable, the other unknown. and uncertain. If the word were set there by Robert Clifford, his ‘henceforth’ was but a short one.

As we wandered back to the hotel, I could not help thinking how many threads of history we had already seen interwoven on this trip alone. I wondered too how many of the people whose threads they were had known at the time the mark they would make on the stories of the land. None of us really know how, or even if, our own threads will be seen by future generations. Or if our memories will be no more than pale ghosts walking ancient paths unseen.

One thing was fairly certain, though… as the church is built right next door to the castle, it too probably had Norman origins. I must have been inside as a child, but I have no memory of the place… so a visit after breakfast was almost inevitable…

3 thoughts on “Solstice of the Moon: Desormais…”