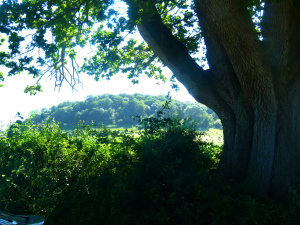 … As Patrick sat and thought, and the seconds ticked by into minutes, and then hours, painful memories of his recent meeting exploded on all sides of the impossible phrase.

‘Who?’ he had demanded and banged his fist upon a desk.

“Montgomery’s Men?” he repeated, weighing the impossibility with a pulsing temple.

‘The law of unintended consequences,’ smiled his superior, calmly.

“What about the Law of the Land?” he shouted!

And then, knowing there would be no answer, in the silence of his truth, he left the room.

… “The Land doesn’t make Laws,” smiled Wen as the two of them finally approached the long stay car park at Holyhead.

“Don was staring at the impossibility of the Moto-Home still awaiting their arrival, “No, clearly not,” he agreed absent mindedly.

“The Land just has Lore, which is quite different and infinitely more sensible.”

“Then check it!” said Wen, lighting a cigarette.

A couple of hours and one discarded cardboard box later, the Moto-Home finally trundled out of its long stay car park and headed into a Land of infinitely sensible Lore.

“You were saying something about the sensibility of the Land’s Lore?” said Don having found no bugs.

“The Lore of the Land, although perfect, does not impose itself, it simply waits to be discovered.”

“Yes, that is perfect,” smiled Don as the Moto-Home picked up speed…

2 thoughts on “Shades of Truth…”