Sharp tang of woodsmoke, tall shadows climb stone walls, reflected flames dance in a black pool. Deep in the belly of earth, the symbols of the rite painted on pale skin, I wait as the torches come…

I could not say where or when the scene unfolded, nor what was the rite, only that to find yourself unexpectedly standing in a landscape familiar from an old, recurring dream is very strange. The soft echoes of the chamber brought back one missing detail. 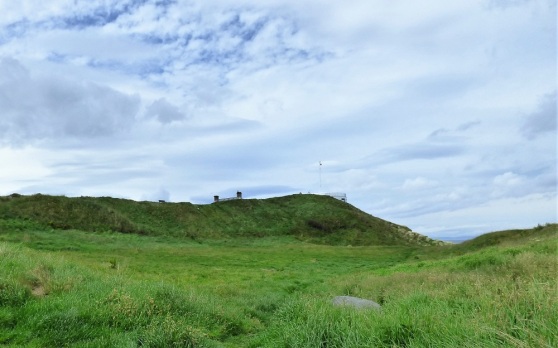 We had arrived in Burghead knowing that we would take a look at an ancient fort and a holy well. For once, that was about the limit of my knowledge. We had been given a detailed itinerary, but I had deliberately not researched any of the places on the list. As I was not one of those responsible for guiding the weekend, I would be able to come at each site fresh and free from preconceptions.

Burghead has all the solidity and cleanliness typical of the area, but although most of the town has stood for just a couple of centuries, its history goes back into the earliest of times. At low tide, you can still see the peat beds and remains of trees that stood, where the sea now flows, some seven thousand years ago. The earthworks of the Pictish fort were unmistakeable as soon as we had parked… and incredibly well sited on a spit of land surrounded on three sides by the sea. But, when the Picts first came to the area and began work on the earliest phase of the ‘promontory fort’, the promontory had become an island, separated from the mainland by a narrow strip of sea. 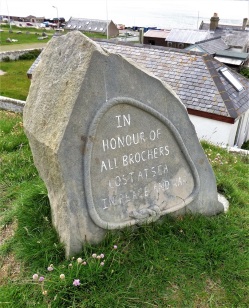 Was the site of the new fort first chosen simply for defensive reasons, which is entirely possible, or was there some deeper significance for the choice? So many times we have seen the lands of the living and the lands of the dead… the landscape of ritual… divided by water. There is even the old magical tradition that flowing water contains or prevents the passage of otherworldly beings and forces to strengthen the idea. Maybe there was more than just tactical planning by the founders?

Most of the fort was buried beneath the new town in the nineteenth century, but radiocarbon dating has shown the site was already occupied as far back as the third century. At the height of its strength, the fort had walls up to twenty feet high and twenty-six feet thick, dotted with around thirty Bull carvings, only six of which have as yet been located.

Was the Bull the symbol of the tribe, its spirit animal… or both? Is it an earth-bull, association with strength and fertility, or one of the mythical water-bulls of Scottish folklore, who were shapeshifters and could not be killed by drowning?

The information boards at the holy well spoke of executions by drowning, such as that of Talorgen, son of the king of Atholl in 739, could not resist the idea of possible beheadings and mentioned the Celtic carved head found there as being a ritual object such as we see at so many ancient wells. Bearing in mind that the well would once have stood within the walls of a fort surrounded by sea, I would not have thought that contaminating a source of drinking water with messy executions would have been the norm. Not with the sea below the walls.

On the other hand, having a shrine to water deities within the fort, to whom appeals and offerings might be made and where rituals might take place, that does make sense. The idea that the Picts saw ritual significance in both caves and water is reinforced at a site not far away.

In a nearby cliff, the walls of the Sculptor’s Cave are decorated, curiously enough, with pentagrams and other Pictish symbols. Deep within the cave, many human bones were found. Some were cut through the neck as if deliberately decapitated. Others show clear evidence of having been deliberately defleshed. Some heads, mainly those of adolescents, appear to have been placed around the entrance to the cavern.

The majority of reports focus on the apparent brutality, sensationalising ghastly rituals and barbaric sacrifices. One, rather more considered report is that of ScARF, the Scottish Archaeological Framework, who suggest that the caves would have been a liminal place, between land and sea, where “rites of passage – transforming children to adults or the living to the dead – may have taken place” and where it was thought that you could reach out to “the gods or spirits of the underworld”. We know that bones held meaning for our ancestors and that the cleaning of the bones for burial was seen as a respectful funerary rite. We also know that initiatory rites of passage, such as that marking the transition from child to warrior, priest or shaman, often held an element of real risk. What we do not know is the story behind the bones in the cave and it seems unfair to paint their people as barbaric, by our standards, without that knowledge.

That the ritual significance of water persisted into the Christian era we also know, with baptism forming the central rite of all who embraced that religion. There is another well in Burghead, dedicated to St Aidan… a name we have come across many times before on our travels… where the water is still clear and vessels are still provided for travellers… and their dogs. This is not something we have come across before in this health-and-safety dominated age… but oddly, it was not the last time we would see a holy and healing well still in service on this trip.

But the rock-cut well before us was unlike anything we had ever seen outside of dream. It felt forlorn, forgotten… but the spirit of place was not without power. Had it been a baptismal chamber? Quite possibly, with its steps leading down into the clear water and its ledge, either seat or walkway, running around the outside. Had it been used for Christian baptisms, like many another holy well that predates Christianity? Probably… but only later in its history.

The well reminded me of a painting I made many years ago, trying to catch the essence of a fleeting dream, with the shaft of light illuminating a priestess who stands within a well, her robe floating around her on the water. It was not a good painting, but I saved it and called it Chalice… for when I inverted the colours and the image, the priestess became the stem of a grail-like cup.

And it was dream that brought me to ask for the chant. We gathered once again at the entrance to the chamber. With a health issue, my own voice was meagre, so I was able to listen and feel the growing resonance as we filled the chamber with sound, cleansing, illuminating, reverberating… and, at the last, lifted to the sublime by the voice of a tawny-haired priestess whose favourite robe is red.

It was a quieter company that walked along the earthworks to stand looking out across the sea, the mood only lightening when we found a complete ‘fairy ring’ of toadstools on the way back to the car. There was once more visit before lunch… down to the shore in ritual mode, to once more walk our pentagrams. The tide had come in, as if sea had come close to watch and, after the well, there was a rightness in that.

3 thoughts on “Dreaming Stones: “…and under the earth…””