You wouldn’t have thought it was the same day that had thrown all that snow at us, albeit briefly. By the time we had traversed the hills and watched the buzzards wheel overhead the sun was shining and the skies were blue. Bitterly cold, of course, but you can’t have everything.

I had been to Bradbourne before, a tiny hamlet these days with some wonderful old buildings reflecting a long and more illustrious past. There had been a priory here, once upon a time and the land had been held by Norman nobility. Before that there had been the Saxons. 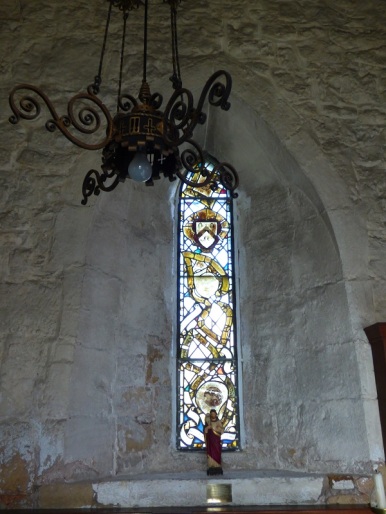 It was one of the places I had been ‘castigated’ for finding on my way… this is not allowed. My contention is that as it was never lost, I had never found it. Just happened upon it. Not the same thing at all… Be that as it may, I had wanted to bring my companion here for a while as there were some remarkable things to see.

The first of them greets you as you walk up the drive towards the little church and the fact that there is a 1200 year old carved cross in front of an obviously Norman church on a hilltop carries a certain promise. Personally, I was feeling a little like a magician with a rabbit, having been here before.

The cross, though incomplete, still stands tall. Much of it is weathered to the point where the panels are barely decipherable from having been used as the stones of a ‘squeeze’… a narrow gateway through a wall… for many years before it was recognised and reinstated. And once again, all the panels showing figures showed them as twins… while the twin ‘suns’ of the crucifixion scene posed questions of their own.

The outside of the church still holds, apparently, other pieces of the cross…or of other crosses perhaps. There are old carved heads above the doorways and beside the windows and, once inside, Saxon stonework in the nave. A huge 17th century Italian Adoration of the Shepherds graces one wall whilst opposite an unusual, almost Moorish wall painting from the same date spells out its message.

There are two fonts… one carved of a single block of square stone and highly unusual, thought to date to around the 13th century. It is all in the details in these little churches which may look unremarkable given a cursory glance.Look carefully at the screens of the Lady chapel and there are some centuries old carved wooden panels hiding behind the chairs. Little is known of their origins but they are thought to be of Scandinavian origin.

The stained glass in the east window over the altar is overly bright and rather gaudy. In the lancets either side of the altar, however, are fragments of 14th century glass, though I personally prefer the very unusual south window about which I can find little information at all.

But lovely as it is, it wasn’t the interior which had drawn me back. The church incorporates stone from the even earlier Saxon church but the new church dates back to the 1100s and its tower is worth a trip from anywhere to see. 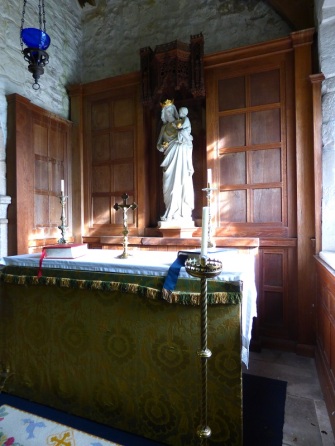 Around the top of the tower a row of heads of man and beast look down. A Norman arched window pierces the side and the view over the landscape is stunning, even in February. But it is the south door that is the jewel. The carving is so fresh and crisp I had almost dismissed it as a copy on my first visit, but a closer look and the work and weathering are unmistakably original. 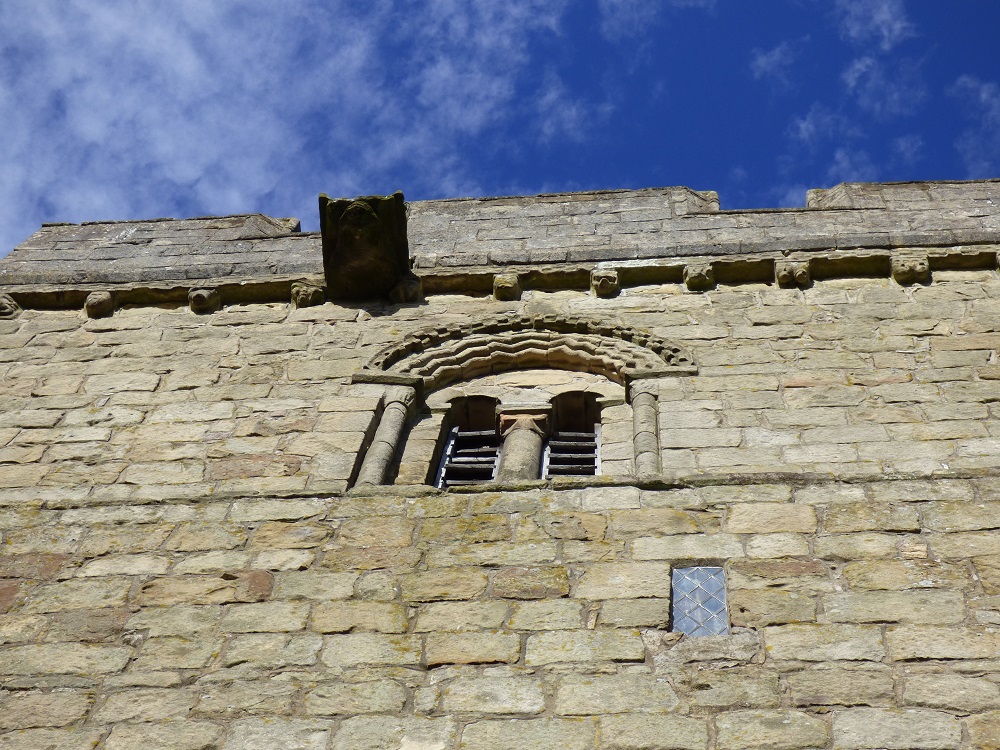 Twin beasts, entwined creatures, the beast that looks back and a man devoured … all symbols we have seen over and over and which occupy our minds with their pictorial riddles. It is an incredible thing to see.

Walking back to the car we passed yet another calvary cross base that has been turned into a sundial plinth and pondered the shape of the landscape and wondered why this place had been chosen by its first settlers, possibly thousands of years ago.

You get a real sense of the continuity in such places and time ceases to be the fragmented affair we know, flowing instead across the face of some greater canvas than we can encompass. But time was on our side that day… we still had most of the afternoon to explore and there was bound to be a pub on the way…

2 thoughts on “Back to Bradbourne”