I nearly didn’t go. The sign pointed down the lane… and the lane seemed endless. I almost turned back… it would have been a long detour to find a locked or uninteresting church. But after the buzzard, I thought I really ought to make the visit. Was I glad that I did!

Before I go any further, I’m sorry… I whittled the pictures right down, honestly I did… left out so many, so much detail…

As soon as I pulled into the little street and saw the church perched up on its knoll, especially in a place named Somerton… and with possibly the most impressive preaching’cross’ outside… I knew I’d made the right decision. There were birds on the grass, crows on the tower…the morning had become beautiful, and the setting was idyllic.

So where, exactly, do I start? There was simply so much here…

The official line is that  the church was built around within eight years of  the Norman conquest in 1066AD. It is thought to have replaced an earlier, Saxon church… and given the habit and directive of building the earliest churches on sites of pagan worship, who knows how far back in time this little mound has been sacred ground.

The medieval preaching cross is not, of course, a cross at all, but a pillar topped with a carved square of stone, standing upon its steps, themselves carved with rather solar looking faces at the corners.

The current doorway is a later addition, though still Norman, though the porch and tower date to the 14thC. What is probably the original doorway can still be seen as a blocked up archway inside the church behind the font… an odd shaped stone that is thought to have once been the base of a pillar. But so far, I hadn’t even made it inside…The outside was incredible enough, with grotesques and weathered gargoyles, the traces of ancient doorways… a beautiful avenue of yew trees leading to the original doorway and a very unusual  crucifixion set into the walls of the tower. Even better, fragments of carved stone were laid on the ground beside the church too… carvings usually up so high you cannot see them clearly.

But if the outside of the church took my breath away, the inside was a historian’s heaven, with treasures in stone, glass and wood… and a side chapel full of the most magnificent tombs. These are a bit elaborate for my taste, but the detail of the carvings provides a window right into the past, showing costume, families and giving  a glimpse into the way our ancestors thought about life, faith and death…

This is a tiny village… there is no reason for such a magnificent church… and none is really known; it has never been a large community. Whatever the reason, it is a visit that takes you on a trip through a thousand years of history.

Once inside the doorway, itself a beautiful survival, you are met with  what, at first, appears a typical Victorian church, nicely kept, full of flowers… and then you start seeing things…

I mentioned the font and the original door… and there is the great key that was used until recent years, hanging on the wall. The pillars are obviously old, not Victorian replacements… as is the beautifully carved 16thC rood screen, with the double middle rail, which is unusual. The coat of arms belongs to William Juxon, Rector of Somerton before the Civil War of the 17th C, who became Archbishop of Canterbury at the Restoration.

The north aisle has a 19thC stained glass window in the style of the Arts and Crafts movement; designed by Christopher Whall who worked with Willaim Morris. The choir stalls are also in this style, carved with animals and birds and seated figures.

On the south side is the chapel of the Fermor family… beautifully kept, with fragments of the original medieval tiles on the floor and the most magnificent tombs, ranging from medieval brasses to alabaster effigies, each with their inscriptions typed out to be read by modern eyes…

The stone corbels beneath the clerestory are delightful.. whimsical… strange creatures… and one that looks identical to the carving we had seen above the window at Beeley the day before… the best part of two hundred miles away. 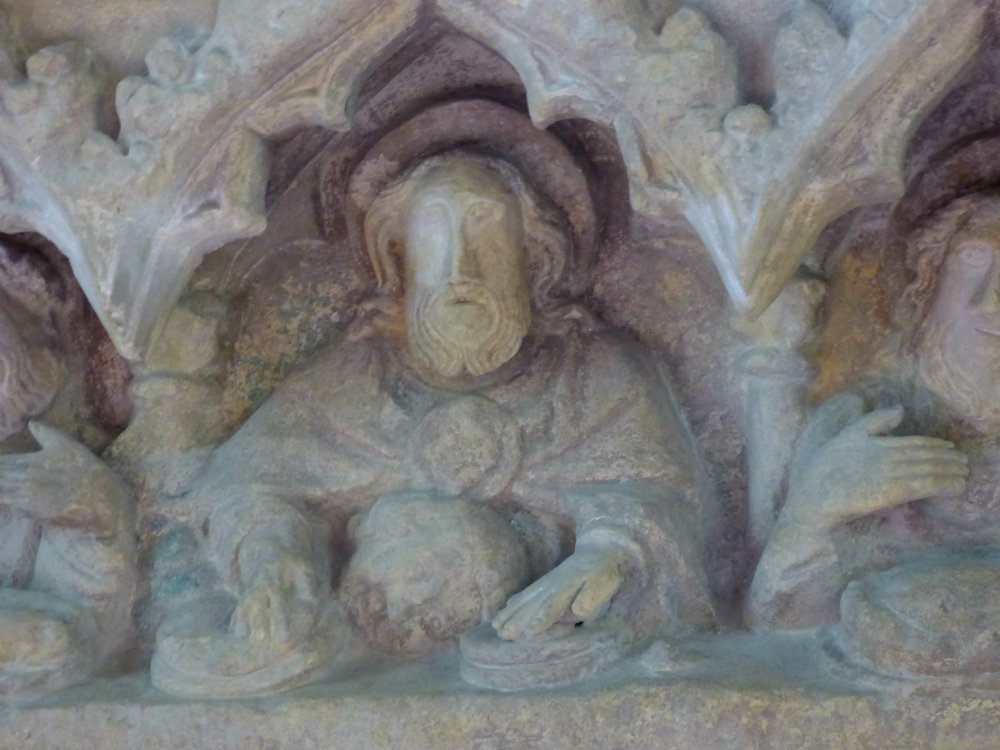 And then, there is the best bit. The reredos… I have never seen anything like it before and I have a feeling I will be going back to see it again. It dates to around 1400 and shows the Last Supper, with Jesus at the centre. On his lap is the head of the Beloved Disciple and five disciples either side. In front of the table there is a damaged section, which probably depicted Judas. All nice and traditional so far… but just look at the carvings! Each one a real, live person… individual, with character in their faces and gestures… some look as if they might have been enjoying their wine too…one seems to be refusing a refill… it is an incredible thing to see… and to have survived. This church was an absolute gem! 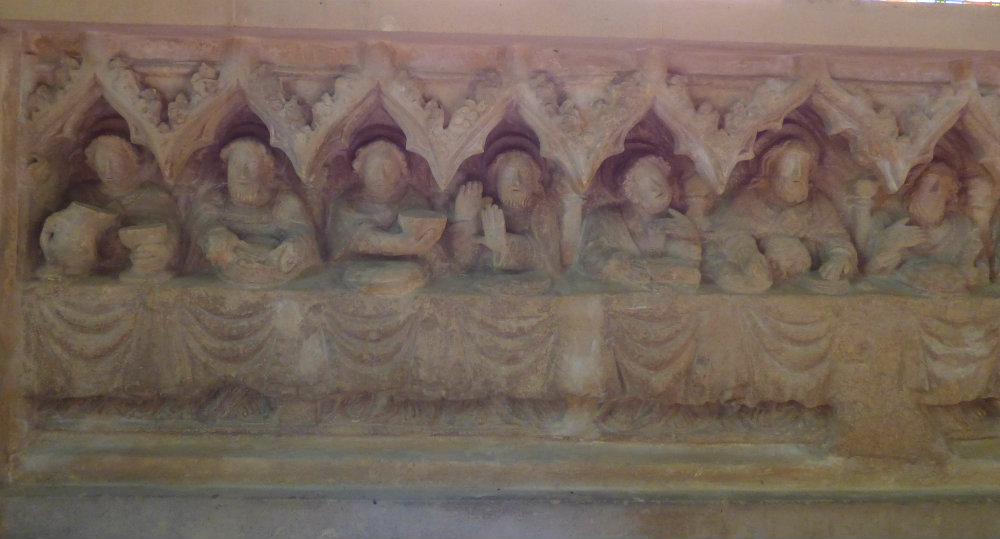 2 thoughts on “Sidetracked to Somerton…”