I had driven the long road south, starting before dawn had finished painting the sky. Four hours later, I was almost on my local turf and feeling the usual reluctance to complete the journey. It is not  just that I would prefer not to leave the north at all. Nor is it just the desire to prolong the absence from the everyday worries that are left behind for a little while on these trips, or even that I love driving, though both of those play a part.

There is an intimacy with the road on these occasions that is hard to explain. It becomes a living artery through which I, the land and its history flow all as one, melded in some strange way into a consciousness beyond my own meagre mind. I feel myself a small but true part of the vast river of presence that flows around and through the single, oscillating point of what I am conscious of being ‘me’.

It was, then, with no feeling of frustration that I saw the narrow lane ahead was blocked by a removal lorry. The traffic jam behind it…two cars… had already turned off their engines to wait. I turned off the road instead as, fortuitously, I was just about to pass the entrance to a lovely little place.

Stuart and I had been here a couple of years ago and seen a heron flying lazily over the ponds that flank the little track. There was only a raven, black against the spring green, and  ducks quacking noisily on the water as I pulled up beside the gate and walked towards the church.

The little church is an island in a sea of green. There are just a few buildings here now, where once there was a substantial medieval village The site has been occupied far longer than that though as Romano-British pottery has been found during ploughing in the fields where the Manor once stood.

The doorway still bears the crosses scratched into the stone by medieval pilgrims and, although the building has evolved over the centuries from its original, aisle-less form, it somehow feels unchanged at its heart.

The tiles beneath my feet have been worn by the passage of many other feet. They have been here, some of them, for eight hundred years. It is impossible to walk in such a place without feeling the human history that breathes from its very stones. Upon one wall, a modern silk painting by one of the parishioners illustrates the continuity of faith here over the centuries.

The nave is shadowy, cool and simple, the only colour is the light streaming through the stained glass of the windows. Carved heads look down as they have for hundreds of years. One is a fox mask… rather appropriate right now, though I suspect it may have something to do with John de Foxley who held the Manor from 1297.

The eye is drawn first to the glass, shedding jewelled shadows on ancient stone, then inevitably towards the chancel arch and the light beyond. For once that is not a metaphor… it is a different world through the archway and quite surreal.

The way that the table altar flanks the tomb of Paul and Dorothy Dayrell makes it look as if they are laid upon a bed with their arms raised in prayer. Scudding clouds make light and shadow dance through the glass, lending a fleeting animation to the couple.

Paul Dayrell died in 1556 and Dorothy in 1571. She had been the widow of one William Saunders and was Paul’s third wife. The ornate tomb faces the high altar. The arms of the Dayrell family and the elephants of the Saunders’ arms are carved in relief at the corners. Their shield adorns the sides of the tomb and beneath it, their nine sons and six daughters are remembered.

There are older, though simpler tombs here. Paul’s ancestor, another Paul Dayrell, died on the 29th March 1491 and is buried here with his wife Margaret. An ancient brass memorial depicts the couple, he in his armour, she in an ornate headdress and gown.

Across the chancel a the Easter Sepulchre holds a great slab and the brass effigy of Richard Blakesley, the rector of the church who died on April 6th 1493. From above, an even older head looks down on the headless effigy.

It seems as if faith was once a simpler thing. The inscriptions and design of later monuments seem to grow in complexity and ostentation. The later tombs seek to show the importance and standing of the deceased in life, as if it truly mattered after death; the earlier brasses simply ask a blessing on the soul.

I wonder about our reasoning. Are such grand tombs raised in love and grief by those left behind? When the portraits were often commissioned during life, it seems unlikely. Why, when death treats us all as equals, do we feel the need to leave our mark in glory upon the world? Do we fear oblivion so much? Are not the faithful of these churches promised forgiveness and Heaven? Beneath the heels of his master, a small dog seems to smile. 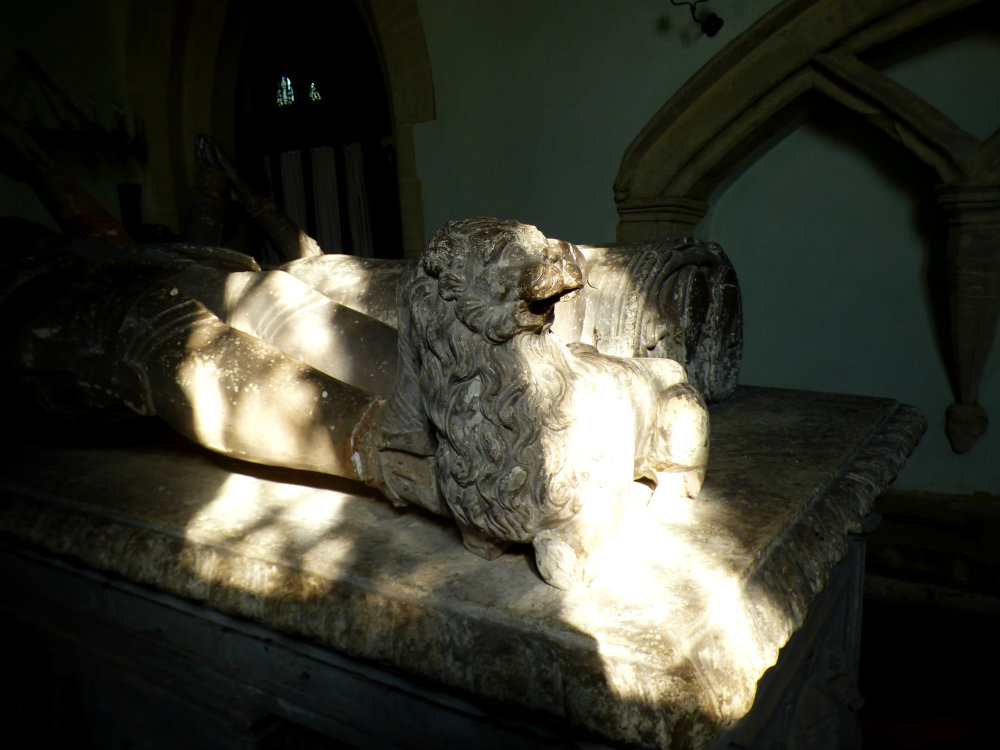