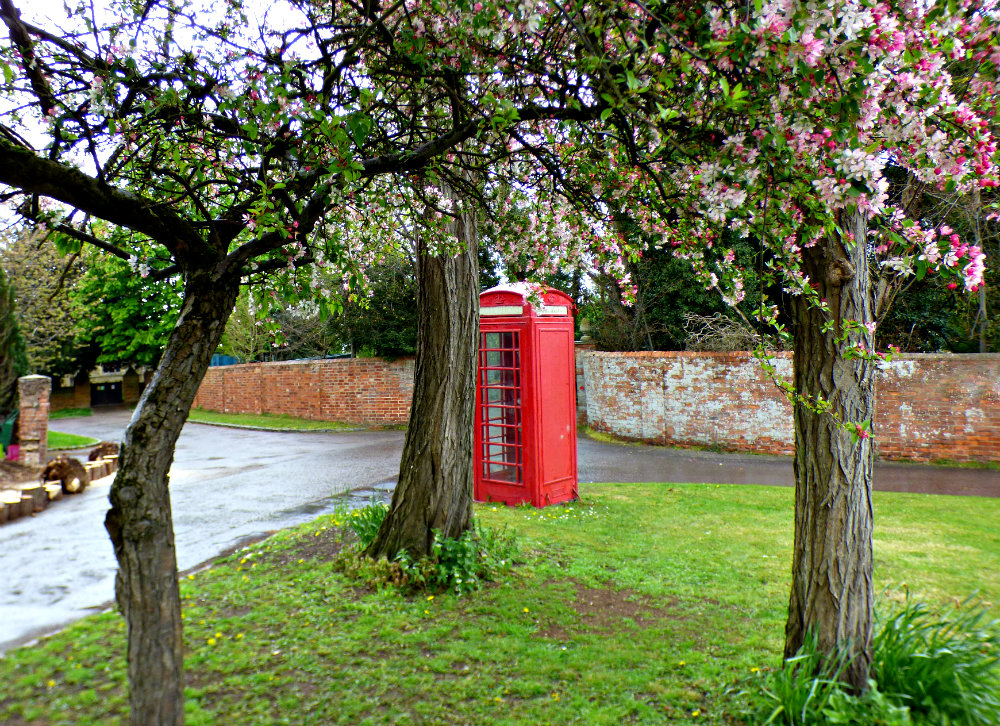 My guest and I were out soon after lunch and heading towards the terminal blandness of Milton Keynes. I wouldn’t normally inflict such a place on a guest… this is one of the ‘new towns’ of the 1960s, its roads laid out in a grid pattern with few landmarks to tell you where you are. On the whole, it is not somewhere I would choose to go at all except for its amenities. Even though there are many green spaces, they seem stifled by uniformity… unless you know where to look. There are treasures to be found, for Milton Keynes is not really a town at all…or it wasn’t. It is a collection of villages that have been joined together with housing and industrial estates… and some of the villages remain, hidden amongst the shiny, cardboard architecture and concrete cows.

It was the amenities that had forced us to brave the asphalt jungle on a Saturday afternoon… the station, to be exact, where we were collecting Stuart who was joining us for the May Day celebrations in Oxford. But it was to the erstwhile village of Broughton, now a suburb, that we were heading where there was something well worth a visit. We had been there a couple of times before and were pretty sure our friend would enjoy what we had to show her. The sudden rainstorm slowed as Stuart went in search of the big iron key for the redundant Anglican church of St Lawrence, now in the care of the Churches Conservation Trust. 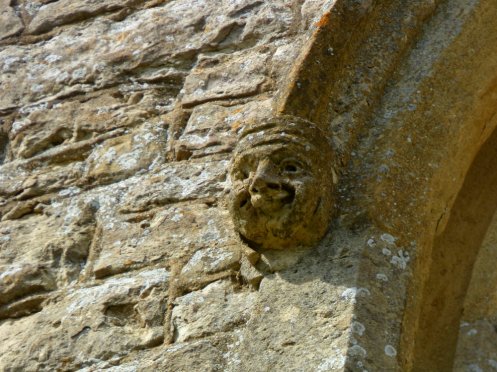 “Oh my…” said our friend when we had finally managed to work the upside-down lock with its curious heart-shaped plate. I fear we may have opened the door with something of a flourish, knowing what lay within the 14thC walls… or rather, on them. The paintings, dating from about 1400,  are quite remarkable. 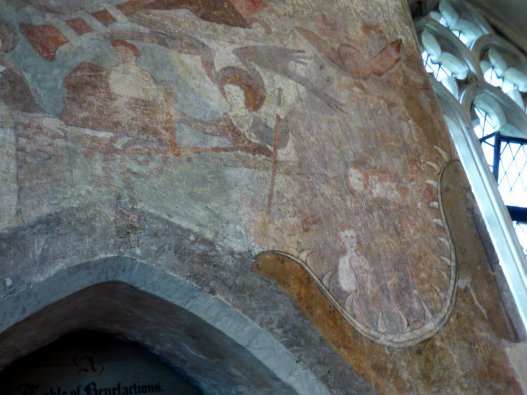 You are greeted by a ‘doom’… a painting of the Judgement of Souls and the ferocious teeth of the Maw of Hell… not perhaps the most welcoming or reassuring scene. Until you look a little closer. Christ sits enthroned, looking on, while heavenly hosts sing and play… and, in the detail above, the souls are weighed in the balance. But look carefully at the Virgin, bottom left, and you will see her hand tipping the scales in favour of salvation. Above them, St Michael wields his sword, dressed in what appears to be scales…or leaves..or tongues of flame… 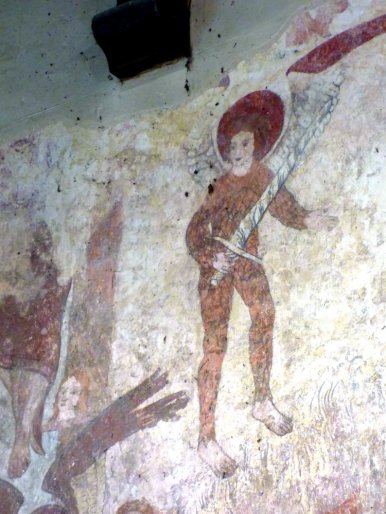 For all the Mother’s mercy, you are left in no doubt at all of the effects of the sin of foul language. The next panel is quite graphic… one of only two Warnings to Swearers left in the country. The central Pietà is surrounded by those whose unguarded tongues brutally dismember the body of the Christ, who is shown with various parts of His anatomy wrenched away and proudly displayed by the blasphemers. 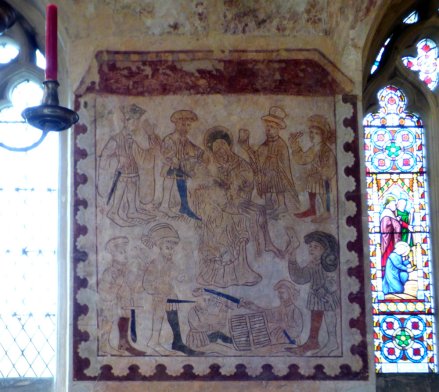 Not all the scenes are so graphic. The Reformation had gradually, through a series of edicts, replaced the earlier iconography with whitewash and painted texts of the Creed, the Commandments and the Lord’s Prayer. 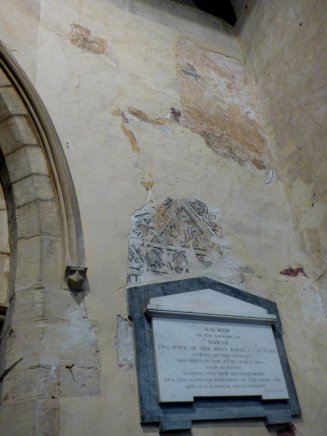 Many paintings have been lost…some are only now being rediscovered beneath layers and centuries of paint. The Broughton murals were themselves lost for 300 years, only being found in 1849. You have to wonder what else may lie beneath the texts… 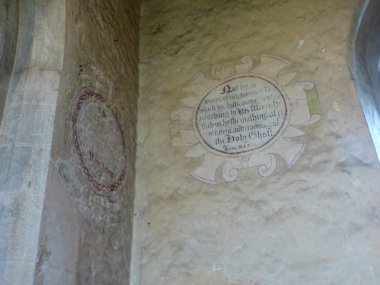 The colours, considering their long sojourn under whitewash, are vivid. The vestments of St Eligius are still bright. He is the patron saint of veterinarians,  as well as goldsmiths, horses and those who work with them… a pertinent saint for our guest for several reasons. With him is St Helena, the legendary finder of the True Cross, whose hair still flows long and soft.

There is an even older painting beneath the two saints.. you can see how it is overlapped by the newer panel. The older one shows something far more mundane… locks, keys, ladders, the ancient hand tools of artisans… and my favourite, a horse. 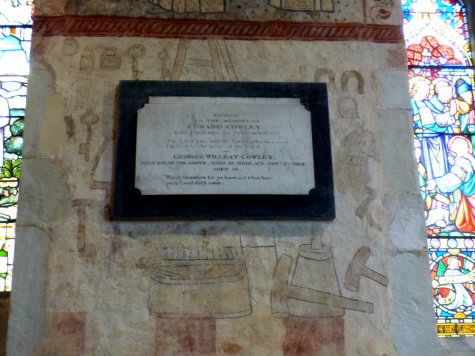 By far the most striking painting, though, is that of St George and his dragon. The huge painting frames the door and is incredibly detailed. The saint lost his head in the 15thC when the ceiling was lowered… but the dragon has an extra head on the end of its tail. Behind them, the traditional princess hold her skein of thread, while a little white dog looks on. 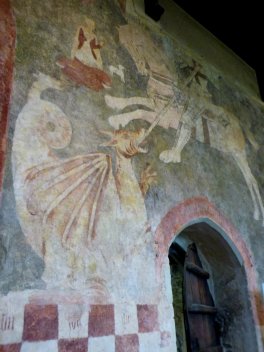 Or perhaps she is the Queen of Heaven, holding the thread of life and accompanied by the Lamb. We do not know… As the paintings and iconography were outlawed for hundreds of years, so did the knowledge and understanding that could interpret them correctly fade away. The little church at Broughton gives an incredible glimpse into a hidden world … but the paintings are not all it has to offer… 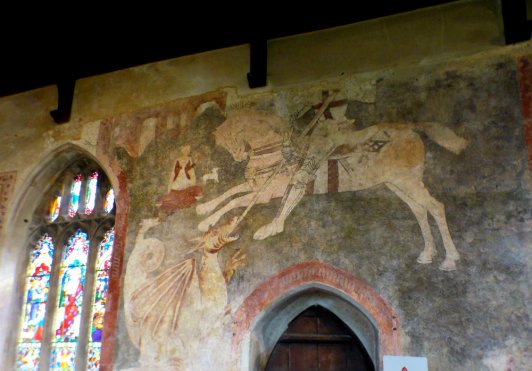