That Sunday we had decided we needed to do some serious work. For starters we knew that we needed some shots for the new book and decided that the wall of the dam we had visited on Friday would be perfect. The trouble was that on Friday the place had been quiet. On a sunny Sunday, it was heaving with people and their cars… we couldn’t even park, let alone have found a quiet spot for a photo shoot. Turning the car around, I bethought myself of an accessible wall in a less popular spot, halfway along the Snake Pass. It would do nicely….and, as I couldn’t park where I wanted, or turn round on that narrow and dangerous road, I got to drive the whole length of that glorious pass through the hills as far as Glossop.

Turning around on the outskirts of the town, we headed back stopping at the highest point of the Pass to look at the distant ridge where we spotted a troll watching over the valley.  There was now room in the little parking spot for us to play and we spent a little by the waterfall, setting up the storytelling shots we needed. It was as good an excuse as any. 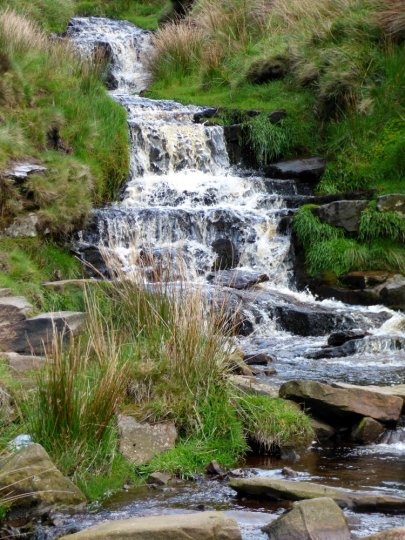 By this time, we had worked enough to be in need of refreshments, and as luck would have it, I had never visited the inn on the Pass that hides within the wooded shadows of the hills. The road itself takes its name from the inn, which was originally named Lady Clough House after the ridge beneath which it stands. There was once a snake carved above the door, the emblem of the Dukes of Devonshire who own much of the land in the area, so the inn became known as the Snake. The road through the pass, designed by Thomas Telfors, opened in 1821 and took its name from the isolated pub… which eventually changed its own name to that of the road, becoming the Snake Pass Inn.

It wasn’t the first route through these hills though. A 2000 year old axe was found here in the 1930s and a Roman Road, now known as Doctor’s Gate, passes behind the inn on the top of the ridge. There are the remains of the Roman guardians of the east-west passage across the Pennines too. The remains of Melandra Fort, first built in wood and turf in AD78, then rebuilt in stone in AD120, can still be visited, though little now remains. Today, the Pass is one of the most beautiful roads that I get to drive, in spite of its reputation for danger.

It was some time later that we decided we should have ice-cream for lunch. Knowing we would find a selection of flavours outside the little café there, we headed over to Monsal Dale, being granted a low-hovering kestrel on the winding road that stayed a while, ignoring our presence as it hunted. Anyone who knows the area might suppose we were simply meandering, but there was a good reason for the detour… and one that would require tea and cake in the café, as a more substantial second lunch… once we had demolished our entrée of  butterscotch ice cream. 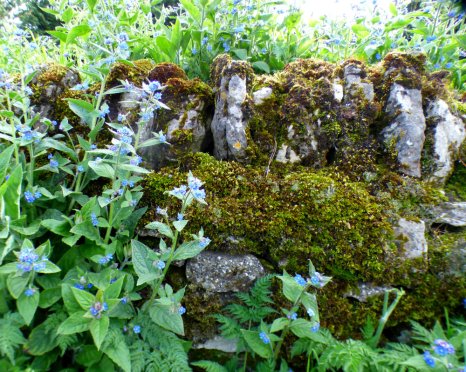 We headed down to our final destination, just a couple of miles away, leaving the car in the half-hidden car-park of a tiny and mysterious pub. The place is very strange…it is like stepping not only back in time, but outside of it. The pub-sign of bleached skulls is a true indication of what you find there, if an incomplete one. There are few drinks to choose from… but they are all potent, even my seemingly innocuous dandelion and burdock. The pint of Black Lurcher favoured by my companion carries even more of kick… hence the need for lunch… we knew we could be there a while. Especially as the little back room began to fill with singers and musicians and a beautiful voice transported us to another time and place altogether.

We did work eventually… and the weekend was over all too soon. Monday morning, before the mists had lifted, I was back on the road and heading southwards to collect my car from the garage that had brought her back to life for me after the breakdown. I stopped to watch the cloud-shadows race across the landscape, wishing there was more time. I always wish there was more time in the north and never want to leave, but this time I had just been told that the house move was, unbelievably, actually going to happen.

And it was going to happen now… without warning or preparation. There would be a busy time ahead, especially with an overseas visitor due to arrive in a couple of days. I wouldn’t be able to start packing until after that… Reluctant but determined, I headed back, knowing that this time, the road south will bring me one step closer to fulfilling my deep desire to move north again some day.