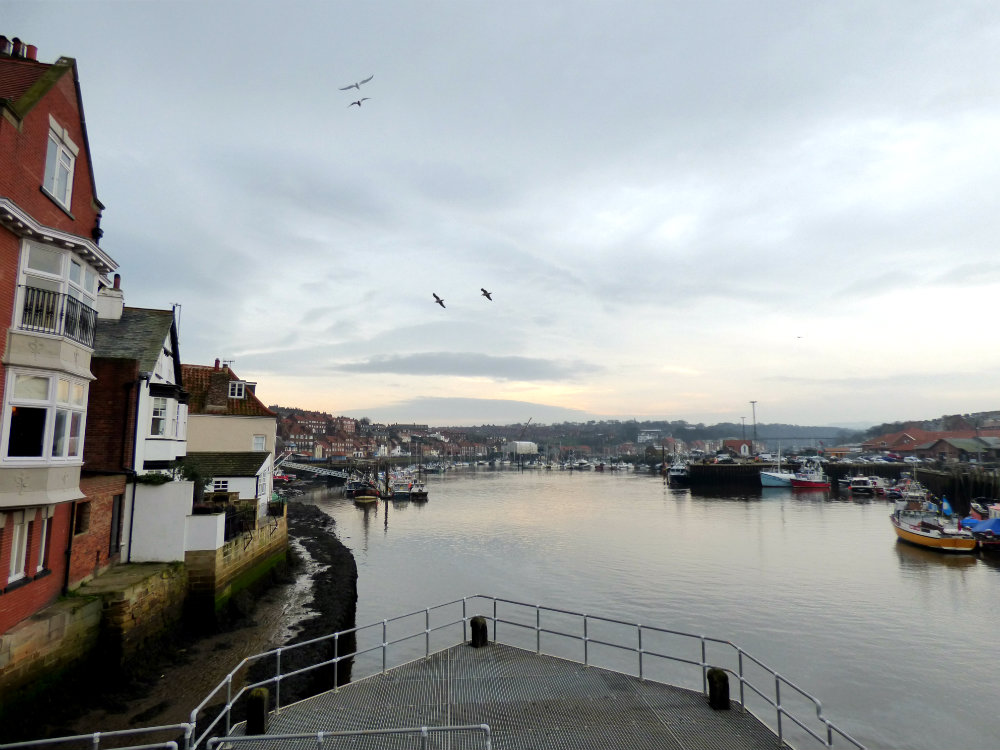 A bitterly cold day in mid-January is not, I have to say, the ideal time to go to the seaside. Especially not in North Yorkshire. But go we did. I have fond memories of Whitby as a child… sitting on the beach in summer, huddled in a sweater and drinking Horlicks brought on a tray from the café at the top of the slip. I brought my own children here when they were very young too, though to be fair, it was at least slightly warmer. Probably not quite as icily cold.

Not that I cared. I love Whitby and it has roots in my family: I pointed out the house one of my ancestors used to live in a few centuries ago. I had been delighted when I traced the family back to a specific house still standing from seventeenth century Whitby and one of these days may see how far back that association went. My companion too has links with Whitby, though they are of a more mysterious nature and my lips are sealed… First things first though. We needed a pub. With lunch… and a fire.

We found both in the Dolphin, right beside the swing bridge that allows the fishing boats out of the Esk and into the sea. Yes, another Esk… first Cumbria, then Scotland… now Yorkshire. There was something a bit coincidental about that. Of all the rivers in all the country… we get three Esks in special places.

After lunch we wandered into the old town to the south of the river estuary. Even here there were few tourists. Not surprising given that the temperature had dropped even further, though we were at least sheltered from the wind. I needed a Lucky Duck. It’s traditional. They were first made half a century ago as lucky charms for actors at the theatre in the town. I was given one every time we went to Whitby. I bought them for my sons. Now I needed one for my granddaughter.

With the little Murano glass duck in my handbag we set off to explore. The glass shop sits just off Church Street, with its tiny, columned market built by Nathanial Cholmley in 1788. The old, narrow streets seem to huddle together here and all styles and periods can be traced within them. Small alleys with names like Arguments Yard run off Church Street and I know from past explorations that cobbled courtyards and unknown treasures lie hidden in many of them. 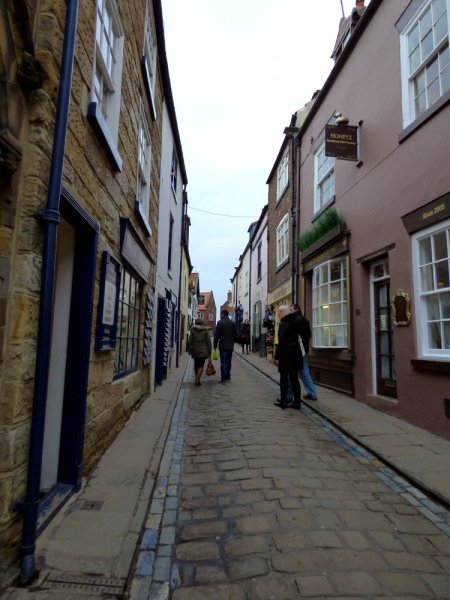 I tried not to drool over the jet in the windows. I’ve always had a thing about proper jet… not ‘french jet’ which is actually glass and cold, but the warm black depth of Whitby Jet… a fossilized wood some hundred and eighty two million years old and prized since Neolithic times for jewellery. It came to the height of its popularity in the time of Queen Victoria as mourning jewellery and some fantastic pieces of craftsmanship survive. Today, it is the gem of choice for the Goths who frequent Whitby and those who come here for the vampire connection. Bram Stoker set part of his Dracula in the town, inspired by the ruined Abbey and the church perched high on the cliff top. Which, even though we had said we would not, was where we were going next. Up to the cliff top via the famous 199 steps.