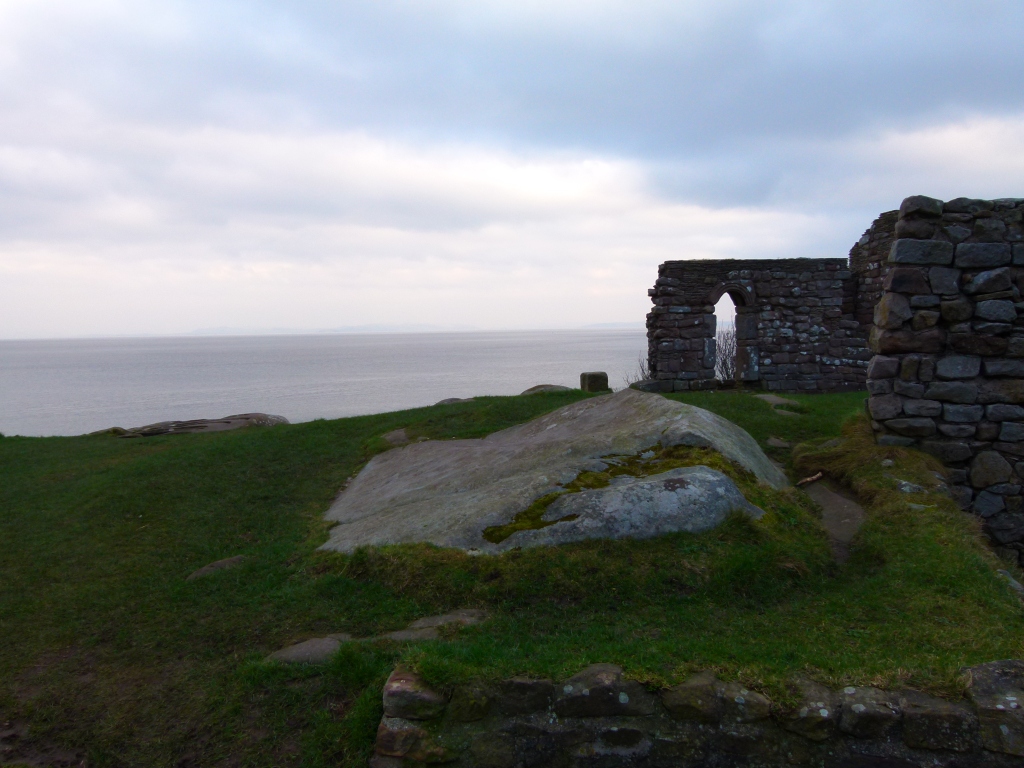 We climbed up the ruins of St Patrick’s Chapel, built in the eighth or ninth century. Legend has it that it commemorates the landing of St Patrick of Ireland and although it was constructed many years after his death, it is possible the place was already marked and remembered. A large cemetery going back over a thousand years was excavated long ago here, but the most striking feature is the line of rock-cut tombs. 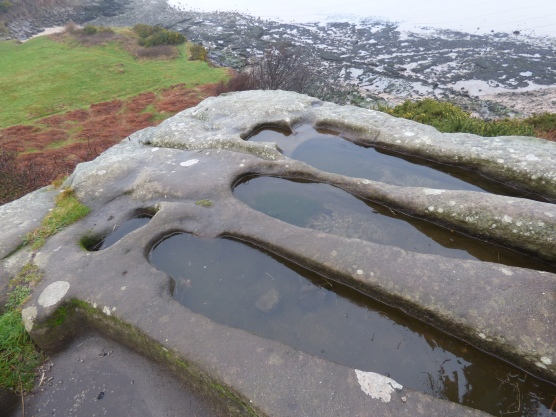 Given the nature of decomposition we had to wonder about those. We thought they may have once held bones instead and later research confirms this has been considered. I wondered too about the use to which they may have been put considering the veneration of the bones of the ancestors that had been prevalent in earlier centuries. 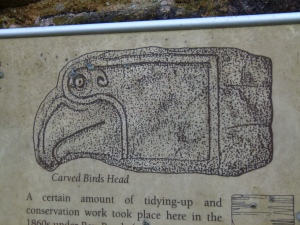 The shaft of a standing cross remains near the chapel, as well as record of the eagle shaped stone once found there that may have been part of a seat or throne. The chapel was once highly decorated… painted plaster fragments with inscriptions were found during an excavation. Yet little is known of its history…it remains an enigma. 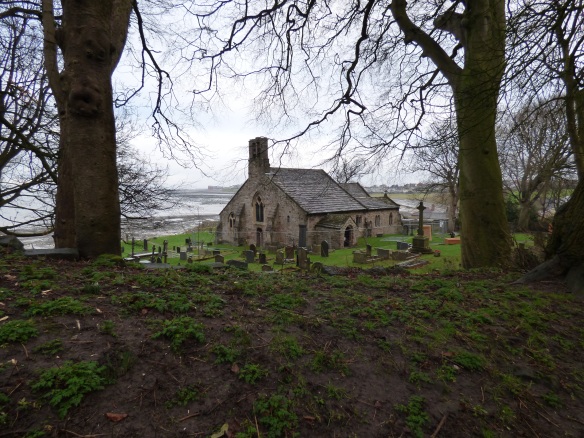 A dyke was cut between the chapel and the place where a new church was built, quite deliberately, it seems, dividing the old from the new when St Peter’s was built. An older, Saxon church had once stood upon the site of the present church, dating back, it is thought to the 7th or 8th century, similar to St Patrick’s just a few yards away. 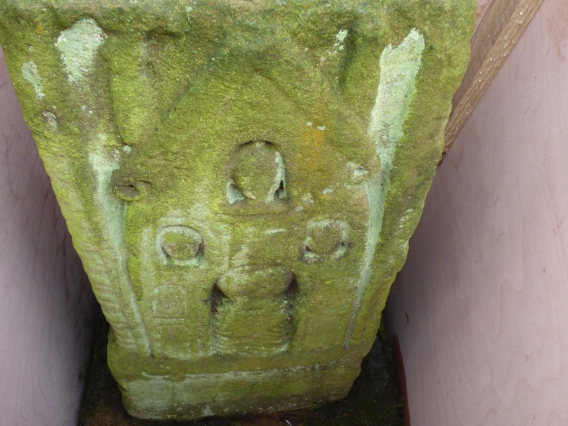 St Peter’s was constructed in the early fourteenth century. Part of the older church remains in the fabric of the building. Saxon stones remain in the churchyard and we photographed what we could, dangling the camera within the builder’s wooden cocoons. It was odd to realise that the last time I was here I had not realised their significance and now we were chasing stones across the landscape. 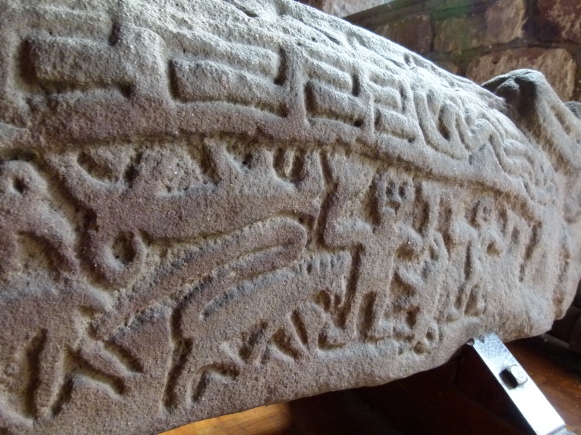 It was a pity we could not see the Viking hogback stone inside the church, though. I have a whole set of pictures from my last visit, documenting the carvings, but Stuart had not seen it and there is a world of difference between looking at an image and standing in the presence of stone. There is debate about the purpose of this stone, though consensus calls it a grave marker. If it were so then it must have marked the burial of someone of importance given the richness and complexity of the carvings and the stories they tell of the Norse myths. If it too had been painted, like the Saxon crosses… a fragment of which remains in the churchyard… then it must have been magnificent. 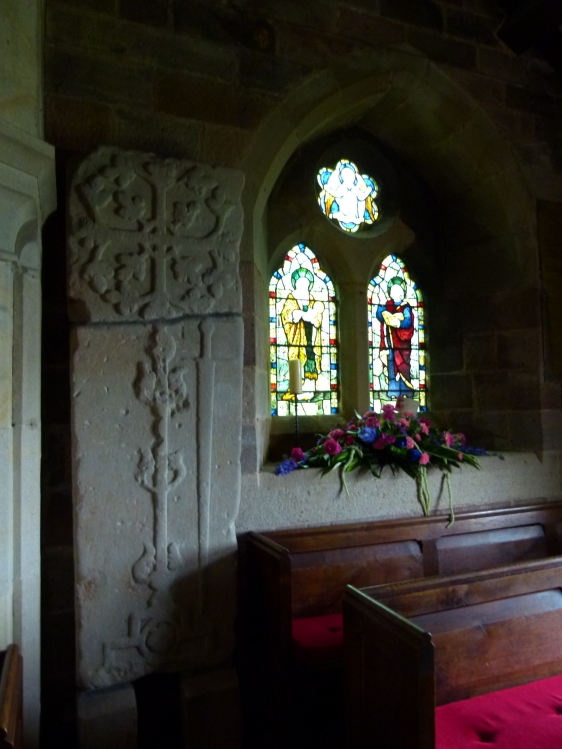 This little church is a jewel, perched right beside the sea. Within I know there are windows of beautiful stained glass, including a Simeon window… which continues to hold significance for us after the revelations of our previous jaunt to North Yorkshire. It is evident that, once the renovations are complete, we will have to return. 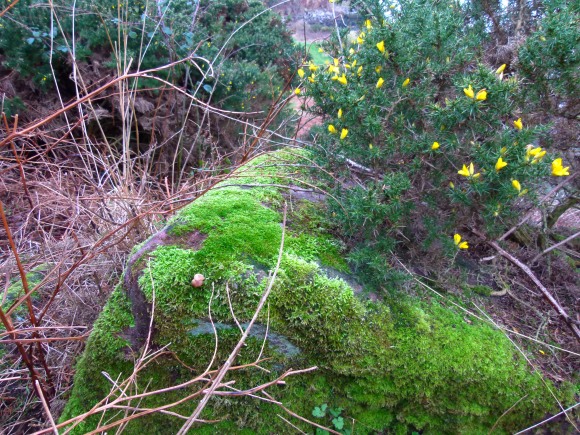