We left the standing stone and walked back through the gate onto the Edge. Normally we would walk back a different way, but the path is a morass at the best of times and it had rained a lot in the area lately. At least the path would be fairly dry this way. The trouble was, we didn’t know what to expect. It is always a delicate decision… how much should you say, indeed, how much can you say without someone calling for the men in white coats to haul you away? 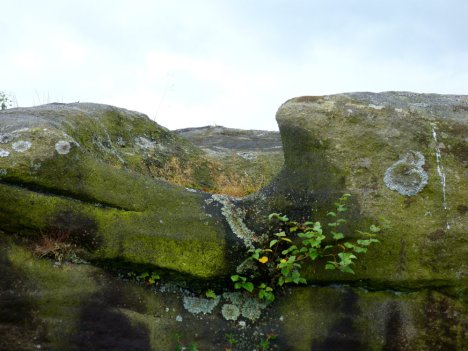 The first time we had walked this way hadn’t been so bad. That is a matter of opinion, I suppose and depends largely on how you view the whole process of death. But it is not the first site where the stones suggested excarnation. The idea of stripping flesh from bone to help your loved ones rejoin the ancestors may seem less than palatable to our culture, but it is and has been a common practice both in this country and around the world. Oddly enough, it was something I had never really thought about… though had I done so I must have realised that the practice went on even into the Middle Ages here. When important or saintly people died and their remains had to be transported long distances, the bones would be defleshed to protect against decomposition en route…and to provide relics too. 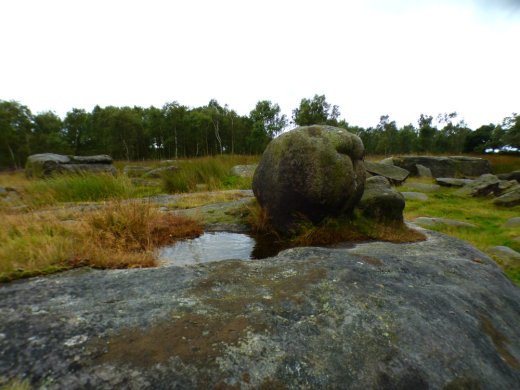 I had first been obliged to consider excarnation after a visit to another site… one we would be visiting later that afternoon. It was only afterwards that I had begun to do some digging and found that air burial and other methods of excarnation had been used by our Neolithic ancestors. It made sense of the stacks of long bones and skulls found in so many of our ancient burial places, but it had never occurred to me before and it is not something that the archaeologists tend to mention in general articles or on prime-time TV.

One theory suggests that the soul was seen as being bound to the flesh and could not be freed to join the realm of the ancestors until the flesh was gone. This would make ensuring rapid excarnation a final act of love and respect. Even in later centuries, there is an echo of this, when Silius Italicus (c. 28 – c. 103) wrote of the deaths of Celtic warriors:

‘to these men death in battle is glorious;
And they consider it a crime to bury the body of such a warrior;
For they believe that the soul goes up to the gods in heaven,
If the body is exposed on the field to be devoured by the birds of prey’.

So, the first time we had passed this way, in the company of friends, we had done little more than look at the stones and decided that it must have been an area for the preparation of the dead. My companion had moved me along, quite rightly… not the best subject for post lunch conversation perhaps.

The second time, there were just the two of us and the place really got to us and with it the sense that, although it had been a sacred place it had been desecrated in some way. It had knocked us for six, being so unexpected… which was why we had hurried our companions through the stones on the way to the standing stone. Somehow it wouldn’t seem quite as bad after visiting the stone…or perhaps we were just expecting it. Or maybe we had just been imagining things. After all, there was nothing visible to support what we were feeling. A sort of folie a deux perhaps…

One of our companions for the weekend was fellow author and blogger, Helen Jones. Helen is sharing her own account of the weekend and graphically describes the feeling she experienced there that ran closely with our own. Nor was she the only one to pick up the images and emotions of the defilement of a once sacred place. Even the photographs already posted of the spot drew a comment about excarnation and sky burial. We will never know the truth of it, but it is a curious and unsettling place.

The feeling does not extend beyond a few yards of the hilltop. After that, there is just the quiet peace of the stones and the horizon. The boulders here would be classed as erratics… stones deposited by the flow of a forgotten glacier… but some of them seem to stand out. Either for their shapes or their positioning, we are not convinced that all of them are erratics. Even if they were, if we can recognise a face or form in the weathered shapes, our ancestors, ready to see the spirits in all things made by Nature, would have done so too.

We showed our companions some of the stones we felt were significant, including a small stone table supported on two boulders in a way that seems deliberate. On our previous visit, I had placed my hands on that table, looking out across the valley, and the feeling is a strange one. You get the impression that where you stand, others have stood for centuries before you. It was here that, without a word spoken, everyone simply sat down in silence, spaced out across the Edge and lost in their own thoughts.

We left them for a while; there seemed to be a reluctance to move, even though the morning had not been physically strenuous, then gathered everyone together and made our way back across the moor. Lunch was five minutes away…and there is nothing like food for grounding you after a place like Gardom’s Edge. We needed grounding too… the afternoon would be spent in a landscape of stone circles… 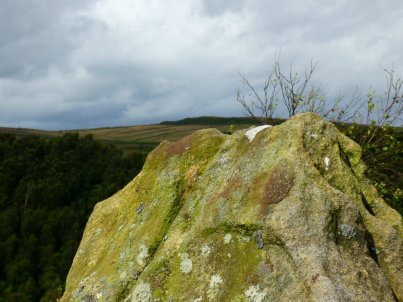