We followed the earthen avenue from Gib Hill to the banks of Arbor Low. You do not really get a clear impression of where you are here; the roads climb steadily as they cross the undulating landscape and, by the time you reach the henge, you are already over twelve hundred feet above sea level. The countryside around you seems relatively flat, with only the distant peaks of higher hills to shape the horizon. Even today there are few buildings in the area and, with little light pollution, nights are dark and the stars bright. And that makes you wonder about what our ancestors might have been doing here, especially given what we have ‘seen’ in meditation within the circle on previous visits.

“…On the screen of inner sight a single glowing point of light that seems farther than the farthest star, yet closer than the sun.

Between her and the light nothing but the streaks of passage… a stream of movement, as of a million suns caught racing comets in the blackness of space.

A wormhole… dragons… serpents aflame with brilliance… a tunnel through which she is rushing faster than the light itself, falling inwards, forwards, upwards… she does not know… 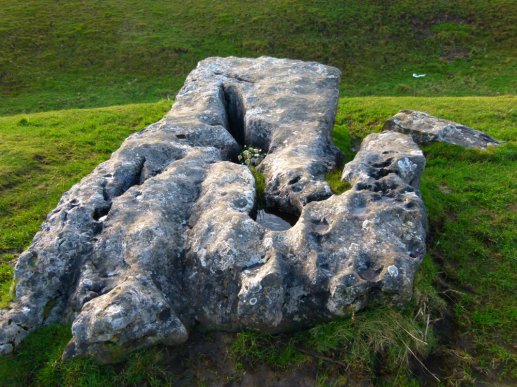 As always, we left our companions to explore, eventually taking up our own position on one of the central stones to wait until they had gathered. We had asked each of them to find a stone that seemed to draw them before joining us. By the time they did, the three other women in that party had all mentioned that they had an impression of serpents. That was curious in itself, that it was the women who caught that idea. Or perhaps not, as we have long felt that women were a prominent part of the ancient rituals of this area. We had the circle almost to ourselves and the other visitors were obviously sympathetic, so we asked our companions to go and sit or lie on ‘their’ stone and meditate.

It is a curious place. It is classified as being one of the finest henge monuments in the north; a ‘henge’ is a circular or oval bank of earth with an inner ditch. At Arbor Low, the bank and ditch together, even four and a half thousand years or so after its construction, form an impressive enclosure around 250 feet across. Near the south-east entrance, a large barrow was built many years later in the Bronze Age, just inside and straddling the henge. Thomas Bateman excavated the barrow in 1845 and found the cremation burials and grave goods in the mound. 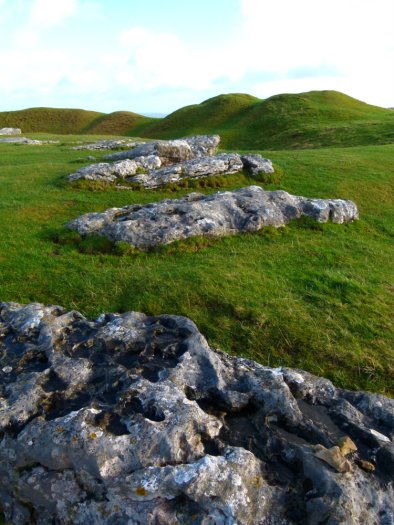 There are over fifty stones forming the ovoid circle within the sanctuary space enclosed by the henge, with another seven forming a central cove. All the stones are laid flat, rather than standing as you would normally see. One theory is that Christians toppled the stones a few hundred years ago, destroying the pagan site, but there is no evidence for this either in documents or in the ground. Even to look at the stones, you do not get the impression they were ever designed to stand. Knowing standing stones so well, half of them would be the ‘wrong way up’ if you stood them on end to form a circle. Many are too close to the edge of the henge… and it does not look as if a circle could be formed simply by lifting them from where they have been ‘cast down’. On the other hand, the stones, laid flat, made us think immediately of a clock face or a zodiac map… and ‘time’ is also an idea most people have come up with when we have taken them there.

The cove itself is an unusual find within a stone circle. Its stones might have been standing at some point, like the gnomon of a sundial perhaps? It looks as if it would then form a central, upright horseshoe around ten to fifteen feet across, with the open end facing a midsummer moonset. A skeleton was also found buried close to the cove during excavations at the start of the 20th century.

It was here we sat and waited, once again, for our companions to return. We did not track the time… time matters little in such a place, but they were gone a good while before, one by one, they began to drift back and join us quietly at the cove. We waited still, unprepared to rush those who stayed out longer, before sounding a chime to bring them back. Three chimes, echoing around the circle and sounding right in a way it is hard to describe.

When all had returned and shared what they wished to share, we joined for a final time in a simple rite of healing and communion, hand in hand around the cove. We had unwittingly timed things perfectly again; as we were finishing and preparing to leave the circle, a large party of walkers arrived to whom our behaviour would undoubtedly have seemed a tad unusual. We are seldom interrupted by the unsympathetic in such moments; as if the intent itself is enough to shield our privacy, even in the middle of a busy tourist site. Hekas Hekas Este Bebeloi! We left the circle, walking between the serpent stones that led us back out into the world.