Our first stop next day was a place where mysterious stones, a Celtic saint and a link to one of the best-known legends of the British Isles all come together in a village churchyard. It took a bit of finding, but at least the weather was a little less vicious than the day before. We were still going to undergo the ritual cleansing of the rain-gods though. We had no idea what we were about to see. We could have done a bit of research and snooping, but I, for one, was enjoying this mystery tour and was happy to go where we were led, enjoying the surprise of revelation.

Walking into the neat and well-kept graveyard of Midmar Church, I glimpsed a suspicious looking standing stone around the back and wondered if it was an outlier of a stone circle. We tried the door of the little church, but found it locked. It is of no great age, being built in 1787 to replace the now-ruined Old Kirk lower down the hill, beside the earth mound that is said to be the site of a Norman Castle…as are so many of these ancient mounds near the old churches. The Old Kirk too was a replacement, built on the site of the first church in Midmar and dedicated to St Nidan, a cousin of St Kentigern, who keeps cropping up on our travels. The two had set out together to bring Celtic Christianity to the Picts around 574 AD and Nidan himself had founded the little church that later bore his name.

Kentigern is an interesting saint. His story is a colourful mixture of myth and legend, with a little fact sprinkled in almost reluctantly, it seems. He is also known as St Mungo, a name he was given by St Serf, who was his guardian and teacher as a child. We have stumbled across his legends in places as far apart as St Asaph‘s in Wales, Aspatria in Cumbria as well as elsewhere in England. In Scotland, he is Glasgow’s patron saint, but more intriguingly, his life story records that he came into conflict with Lailoken, a wild prophet who foretold the death of King Rhydderch Hael. Lailoken, of whom “…some say he was called Merlynum“, is often equated with Myrddin Wyllt, an earlier form of the Arthurian wizard Merlin.

So even without what we had come to see, I would have been glad to visit this little church…another link in a nameless chain that leads us to a destination as yet unrevealed. But as we turned the corner, expecting to be led beyond the church grounds, we were greeted with a most unusual sight. A stone circle, fairly intact and very well kept, right behind the church.

And what a circle it must have been! Midmar recumbent circle, also known as Christchurch circle, is nearly 57 feet in diameter and the recumbent stone itself is huge, weighing around twenty tons and being over fourteen feet long. The two eight feet tall flankers have their flat edges facing inwards and look rather like sharp teeth. Running Elk had explained that the flat edges of standing stones such as these were the parts that marked, or indicated something. With a recumbent and its uprights, the mark the rising, passage and setting of the major standstill moon.

I would love to be able to go into vast detail about the precision of these circles… but it needs someone who really understands the technical niceties to explain it. Like Running Elk.* Basically, these circles allow observers within the circle to chart the movements of sun and moon at significant moments of the year, marking the seasons… and at the longer intervals such as the major standstill that occurs every 18.6 years. We can easily understand how important seasonal changes would be to our ancestors with regard to crops and animals, but there were other reasons that we discussed… and which some of us were to experience later for ourselves… and perhaps others still at which we can only guess. One thing is certain though, these stone circles, raised in the Stone Age and Bronze Age, were not the work of uncivilised ‘cavemen’ but a complex technology in stone. 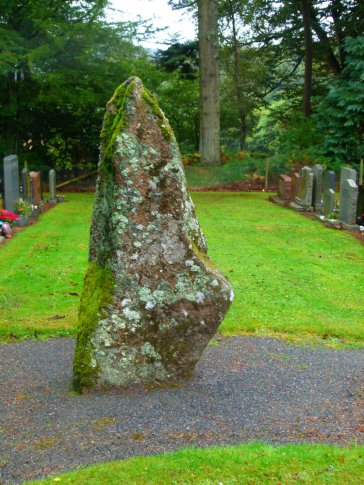 The circle is not quite complete… nor has it been left untouched. One stone seems to face the wrong way, others may have been moved during the building of the church or the ‘tidying’ of the circle that may have removed a central cairn that was added long after the building of the circle. What does remain unsullied though, is a sense of continuous worship going back thousands of years before the birth of Jesus. Many of our older churches are built on ancient sacred sites. The infamous letter of Pope Gregory to Bishop Mellitus in the sixth century gave clear instructions on that point. We do not know what the motivation was for moving the new church to his particular spot. Was it simply an antiquarian passion of the local minister? Was there a desire to illustrate the power of the Church over paganism? Perhaps local superstition engendered a need to keep the stones and their powers ‘within the fold’… that is another thing we will never know. Whatever the reason, the two religions, old and new sit serenely together within their guardian trees… and there is a lesson of peace in that.

There was one last thing we were shown before we left the churchyard… and that too was unusual. The gravestone of artist Anne Rochford. The story, as Running Elk told it, is that knowing that she was dying, she created her own headstone, melding a piece of rough red and grey stone with a metal sculpture.** Not only is it a beautiful memorial, but it says a great deal beyond the name and dates it incorporates. 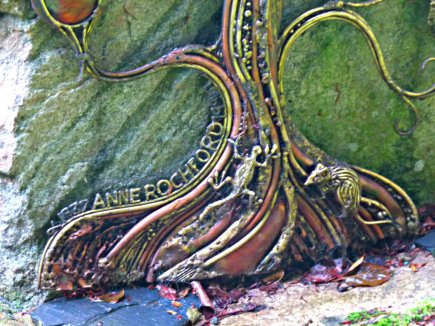 The tree seems full of fire-flowers… all but one empty bud. Creatures… a mouse, a lizard, a spider… climb in its branches; it is a living thing, a Tree of Life that still blooms after its maker has laid down her tools. Perhaps it is no more than a symbol of her faith, her love of beauty and a memorial to her art. I see in it her love of the living land and a symbol of harmonious growth and hope. In place where a stone circle shares the space with a church, there can be no better symbol of peace.

This may seem an odd place to start, but I’ll start here anyway:

The Solstices are marked by the Northernmost and Southernmost positions of the sun. Considering only the point of his rising on the Eastern horizon – it changes every day: INCREDIBLY quickly at this time of year (around the equinoxes). As he approaches each Solstice, however, he appears to slow down, and “stand still”, before slowly heading in the opposite direction and gradually speeding up towards the equinox. It takes him a full year to go from his most Northerly position, all the way to his most Southerly position, and back again. Creature of habit, he always returns to exactly the same position on the horizon at the Solstice (during our limited lifetimes, at least). The most observable difference on his wandering, is that the further North he rises the longer he is in the sky.

Like the Sun, when she rises far North she is in the sky for longer than when she rises far South. Considerably so, the further North you are. On top of all that, the phase of her rising changes every day of the month, so it becomes quite important, to a hunter / gatherer society, to understand when she is Full, and where she will rise in her fullness.

The important Standstill, then, for the peoples who built the circles, is when she is Full. What you REALLY don’t want is the Full Moon rising in the South at Major Standstill – it will mean that (in this area at least) you will have a very short burst of Moon light by which to hunt… Luckily enough, as chance will have it, the Full Moons in the North occur nearer her Northern Standstill during the Winter months (when the hours of Sun light are shortest, the hours of Moon light are longest).

Works vice-versa South of the Equator, with the most Southerly Full Moons occurring in their Winter too! giving them the longest periods of Moon light when their Sun light is shortest. It’s almost like they arranged it especially for hunter gathering tribesmen… 😊

(The term “standstill” to define the turning point of the Moon was coined by archaeologist Alexander Thom in his 1971 book “Megalithic Lunar Observatories”. According to https://en.wikipedia.org/wiki/Lunar_standstill, at least; and who are we to, even consider, arguing with Wikipedia? 😀 )

The full and correct story of Anne’s gravestone, written by her son, can be found on Julian Cope’s Modern Antiquarian website:

“Midmar is where my Mother Anne was buried in 1991 and the gravestone was added a couple of years later. My mother had a deep connection with stone circles and during my childhood we were taken to scores of sites all over Scotland. When she died my father thought of Midmar and had remembered visiting it with her. The sculpture, based on the Indian/Celtic/Universal Tree of Life was commisioned by a local artist and took a long time to get and “feel” right (you can’t rush the creative process). “