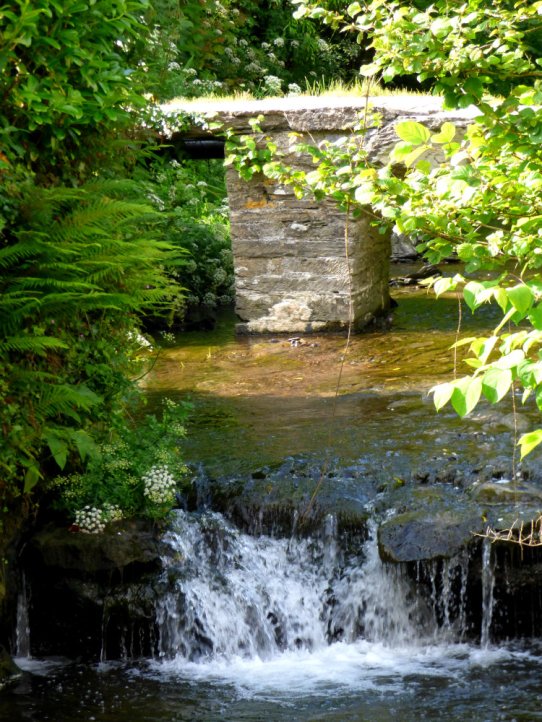 St Brynach’s church at Nevern stands right on the bank of the little river Caman. The old tower, the only part of the old Norman church still surviving unchanged, is within feet of the water that sparkles beside a narrow footpath. An old stone footbridge crosses the water towards the pilgrim’s path down from the ruined castle on the hill… the church was once a stopping point on the pilgrim’s route to St David’s. Many things survive here, from the Celtic Cross in the churchyard to what we would find inside the church. The wild strawberries growing beside the river, however, did not survive for long. 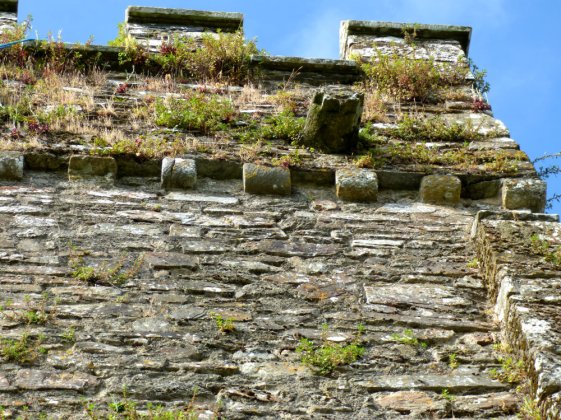 The church was founded in the sixth century when Brynach built a monastery here. The original buildings would probably have been the beehive shaped stone cells more commonly seen in Ireland. This is not surprising as the Welsh called the saint Brynach Weddel… Brynach the Irishman. There are many tales of his life and miracles, from his reanimating a dead cow to sailing across the sea on a stone. The cow, which gave enough milk for all the monks, was cared for by Brynach’s tame wolf. King Maelgwn Gwynedd came to the Abbey, demanding a feast and sleeping places for his men… when he was refused, he slaughtered the cow, cutting it up for the pot. The water, however, refused to boil and the king, realising that this must be divine intervention, apologised. Brynach forgave him, restored the cow to life and, plucking bread from the trees, produced a miraculous feast. The king, to make amends, freed the abbey from taxation thereafter. Or so the story goes… 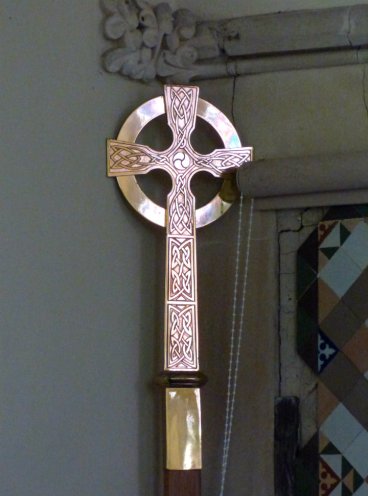 The best known story, though, is that Brynach would escape to solitude upon the summit of Mynydd Carningli, the hill that dominates the horizon, and would there commune with the angels. From here we could truly appreciate the scale of the mountain where we too had communed, sitting in silent prayer for a dear friend. It may seem superfluous to say so of a church, but Nevern is a prayerful place. Perhaps it is the ghosts of the monks that have been seen here that call in the quiet sunlight… or the fifteen hundred years of faithful prayer the land here has known, but there is an air of serenity about the church. 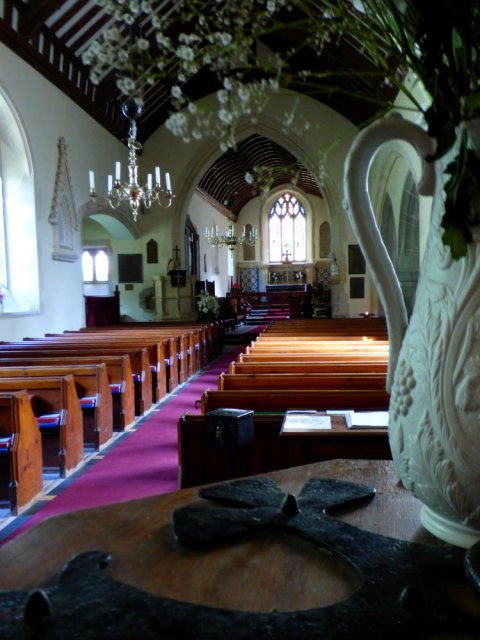 By the door of the church are the visitor’s book and information sheets and, on a card is inscribed the Celtic Rune of Hospitality.

I saw a stranger today.
I put food for him
in the eating-place
And drink
in the drinking-place
And music
in the listening-place.

In the Holy name
of the Trinity
He blessed myself
and my family.
And the lark said in her warble
Often, often, often
Goes Christ
in the stranger’s guise. 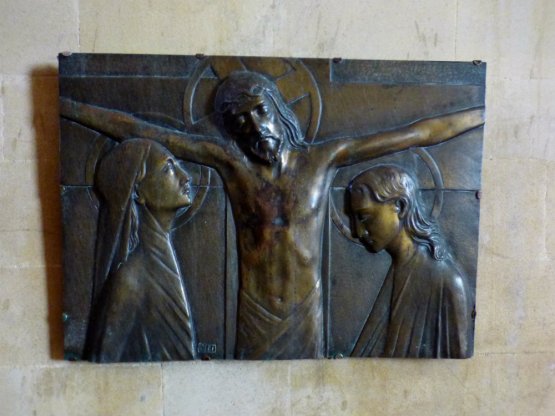 When Christianity first came to these parts, it would have been the Celtic strain, distant from the rule and tenets of Rome. The faith embraced the beautiful, natural world and its creatures and was closer to the earthier roots of the older, indigenous faith. We had found on our trip to Scotland that where Celtic Christianity had been prominent, especially where there had been Culdee communities, there was a particular ‘feel’ that remained at the sites they had founded, even a thousand years and many paradigm shifts later. You could feel it here too. It is not something you can really pin down or describe… it is as if the opposing extremes of heaven and hell have never really taken hold through fear of damnation, but instead, heaven and earth have embraced each other. 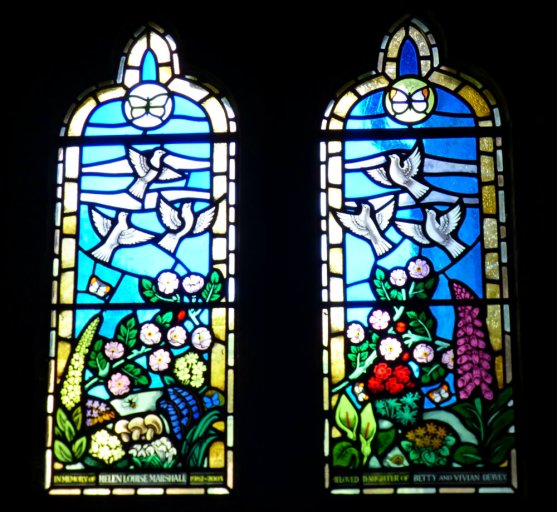 It is a beautiful church, but the most fascinating things were the two windowsills in the south transept into which ancient stones have been set to protect and preserve them. One is the Braided Cross, a thousand years old and unusual in design, bearing the hallmarks of much earlier, Celtic art. 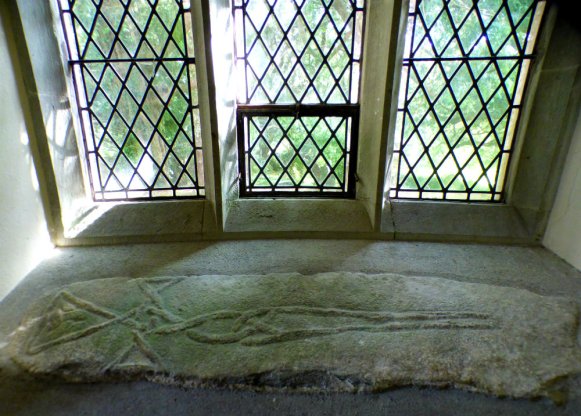 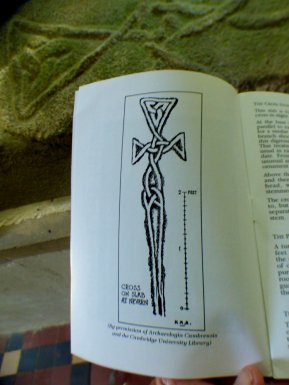 The second is around fifteen hundred years old, contemporary with the Vitalianus stone in the churchyard. This too bears an inscription in both Latin and Ogham. The Latin reads MAGLOCUNI FILI CLUTORI while the Ogham reads “maglicunas maqi clutari”, translated as ‘(the stone) of Maglicu, son of Clutarias’. To have seen one Ogham stone was a gift… but to have two was incredible. 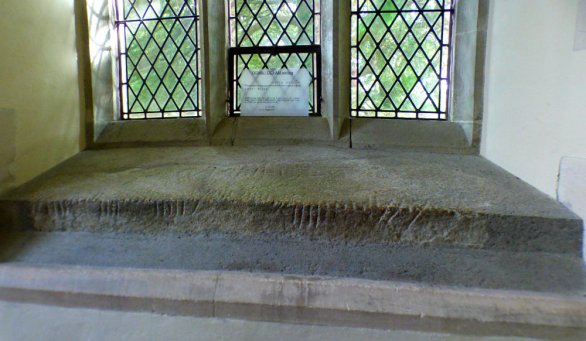 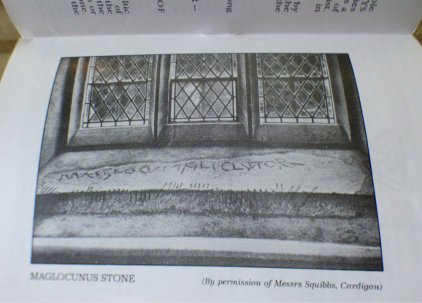 There was stained glass… Victorian and later… showing the saints and scenes from the life and ministry of Jesus. There were doves of peace, holding olive branches, atop the chandeliers. A Romanesque arch above the organ… all the things you would normally look to see in a lovely old church, but for me, that bit of worn stone took the crown. 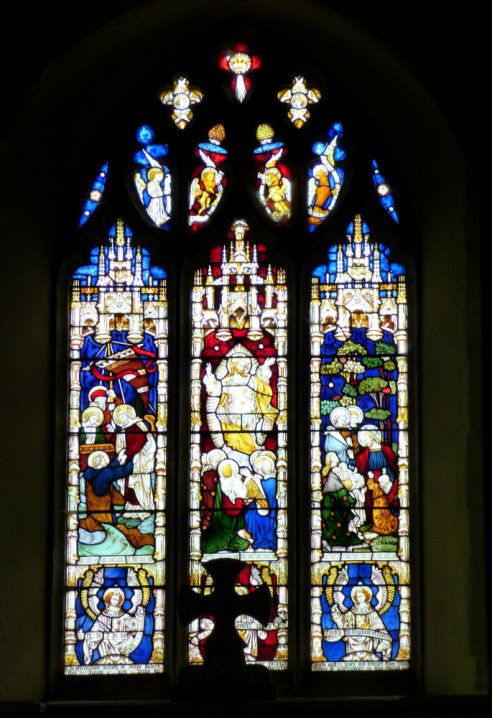 We walked back down through the avenue of yews and sat for a while on the old mounting block where the gentry once preserved their dignity… eating the wild strawberries we had found and marvelling at the great chunks of quartz in the village walls. As we were about to leave, there was a familiar keen from above. Looking up, two great birds sailed overhead. One had the rounded tail and white-patched underwings of the buzzard… its companion, though, was a different and unmistakable shape…so similar to the reconstructed ‘hooded wings’ of Pentre Ifan… a red kite. It seemed our day had earned their seal of approval. 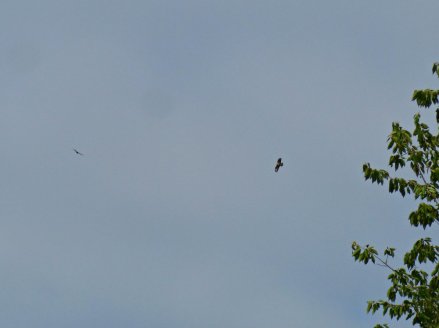 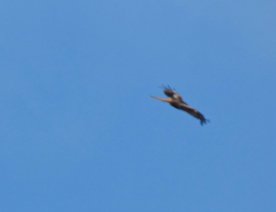