“I don’t know how you have the temerity to even think about writing up Clava… The place is on a different planet… galaxy… something…” All true. I have no idea where to start… it is a place that needs more than words, but words are all I can bring to the page. It is beautiful too, with the white stones contrasting with the green of the grove of trees in which the cairns now stand. In many ways, I’d just like to forget all the factual stuff and wax lyrical about the place, but it does have to be seen in a historical context before the sheer awesomeness of the place can even be touched.

The problem with Balnuaran Of Clava, the Clava Cairns, was immediately obvious… in spite of the fact that it lies just outside of Inverness and therefore over five hundred miles from my home, we would need far more than one flying visit to even begin to get our heads around it. It is a big site, with a group of three principal cairns, all with circles of standing stones around them. Sounds simple enough… but that is far from the truth.

A cairn is a burial mound raised over the dead. Some have a central chamber, others are more in the nature of simple grave markers. They are made by piling up stones and some may then have been covered with earth or turf.

Most of the cairns we encounter these days are small; the larger cairns have all too often been robbed for building stone over the centuries, or are in such disarray that it is almost impossible to get a true sense of how they would once have looked. Here, there is no such difficulty… nor are they just simple piles of stone.

They are beautiful and complex feats of monumental architecture that date back to the Bronze Age. There are many similar cairns of this design still dotted around the landscape of the area. A central chamber, walled with carefully laid stones, held the remains of the dead. Where those remains have still been present when the tombs were excavated, it seems that these great cairns were designed to hold only one or two people.

The Neolithic passage graves which were their forerunners were places of communal burial and communion, where the bones were carefully stored and ritually revisited. Here, many of the surviving cairns seem to have been built with no entrance, reflecting a change, both in the way the dead were viewed and the way they were treated within the community.

Once the central chamber was created, stones were placed, not just piled, around it, often enclosed by a kerb. Older sacred stones were sometimes re-used… like the cup-marked stones we found both within the chambers and as part of the kerb on one of the cairns.

The design of the cairns reminded me forcibly of one of the Pictish symbols we had seen, the double disc, with its inner and outer circles and I wondered if there could be an ancestral link, even though these cairns date back to a far earlier time.

From the central chamber in each of these cairns, a passage runs towards the entrance which faces south-west towards midwinter sunset. The construction is meticulous and I find it quite beautiful. The builders of these cairns may have discovered the use of bronze, but their lingering reverence for stone is clear. 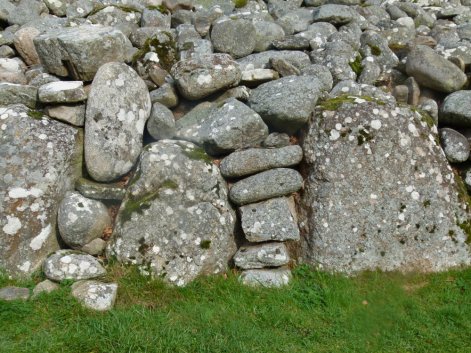 Outside of each cairn is a stone circle. Not just a simple construction of small boulders either, but great boulders and towering, majestic slivers, delicately balanced. In each circle, the tallest stone stands before the entrance and the smallest opposite, across the circle. 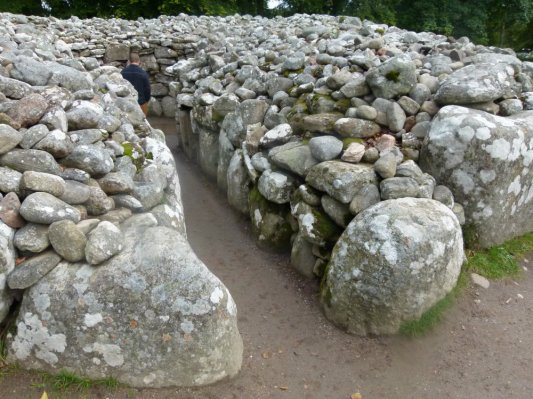 There were people milling around, some from the coaches, being given a well-practised tour by kilted guides. Although we usually avoid getting people in the photographs, sometimes they are a useful addition to give a sense of scale. Even so, we waited until they had moved away before we entered the first chamber. We stood in silence to the left of the entrance, in the inner chamber and were joined by a third person.

I only caught a glimpse across my companion, and assumed it was the lone gentleman who had been hovering close by. My companion got a better look… and it certainly wasn’t the man we had seen. In fact, seconds later, we realised there was no-one there at all. We checked the passageway and beyond… there was no-one anywhere near. Yet we had both seen that third person within the chamber…

Wide-eyed and not even speaking about it, we continued to explore. Two cairns are of the passage grave type with taller walls and chamber. The central cairn of the three that remain is of a different design. For some reason, I really liked the feel of this one. It has not had its passageway unblocked and you can see the care with which it was back-filled when the tomb was closed. But that is not its most astounding feature…

Raised ‘paths’ of stone, like the beams of the sun, radiate out from the cairn to at least three of the stones of its circle. There is no question of their importance, they are very carefully built. I wished we had more time… and Running Elk with us… and maybe a compass… and definitely not the next coach load of tourists… though we did hear one guide mention a further cairn close by.

We had already noted a stray standing stone we hoped to get a look at, but could find no entrance to its field. With so many people around, climbing walls was not really an option. There is at least one hut circle too, though I cannot imagine this was a permanent dwelling unless it was for the tender of the dead.

The third cairn, with its entrance facing away from the centre of the site, seemed more isolated. The trees cluster close around its stone circle and the acoustics, even in the unroofed space, respond with a gentle ‘warmth’ to chanting. I think we could have happily stayed there all day… and all night too… had we been able to do so.

But yet another group of visitors arrived, intent on selfies showing logos on shirts. Their guide was telling them about the portal stone… a great standing stone split vertically. It is the subject of local legend and sounds terribly similar to the portal in Diana Gabaldon’s Outlander. One tale he told was of a woman happily married and the wife of a local professional. Her car had been found abandoned here a few years ago… a huge search had, he said, been undertaken, with acres of land being dug for the body… but no sign of her was found. The consensus was that she had passed through the portal stone to who knows where…

I can well imagine it, in this place. In spite of the other visitors to the site, there is a strangeness and a presence in the stones. It takes very little of their silence to shift the nature of reality, so that somehow you feel apart from it… as if you are moving on another plane, yet able to see and interact with the one from which you came.

We were not the only ones to feel it. As we made our way reluctantly back to the car, an older gentleman with an odd, urgent look in his eyes approached us. “Did you speak to them in there?” Yes, we answered, we had spoken to them. He nodded, let out a deep sigh and walked off into the stones…

7 thoughts on “Solstice of the Moon: Circles Within Circles”