We had wanted to visit the yew for what seems to us a very long time, but which, to the tree, must seem of no more account than a passing zephyr in its branches. Looking at the map the night before and seeing how close the village of Fortingall was, we had decided against the direct route south and instead, headed cross-country. The direct route would have been far quicker and taken us down the motorways… the back roads, we thought, would allow us to see a little more of Scotland. How much more, we had, at that point, no real idea.

With such a long drive ahead, we were trying to be good and not stop at every tantalising stone and circle… there are a lot in the area apparently, attesting to mankind’s presence here for over five thousand years. It was never going to work, though, not completely. Especially not when the morning was set against a backdrop of mountains just beginning to be revealed by the mists. We stopped whenever the narrow lanes allowed, even if it was only to look and take pictures from the roadside. Mounds, cairns, circles… just those few miles could easily have taken us all day, had we the time to spare.

But we were heading for Fortingall to see the ancient yew. There is no accurate way to date the tree… its heartwood is long gone, returned to the earth from whence it came… and estimates of its age vary, source to source. Some suggest it is three thousand years old.. Others believe it to be as much as nine thousand years old, but most sources give its age as somewhere in the middle, which means that the tree has watched over this valley for around five thousand years.

It is one of Britain’s oldest trees… perhaps the oldest. There is another five thousand year old yew at St Cynog’s churchyard at Defynnog in Wales. However, if the higher estimates are correct, the Fortingall yew may be one of the oldest living things on Earth. To stand in its presence, beneath the bright green of its branches, is to begin to understand how fleeting our own presence upon this planet truly is. I had to wonder if Douglas Adams had ever visited the yew and whether it had given him the seeds of an idea for the Total Perspective Vortex in the Hitchhikers Guide.

Thomas Pennant, a traveller, left a record of his own visit to the tree in 1769. At that time the trunk of the tree measured 56½ft (17.5m) in diameter. He also mentioned that it had been damaged by the village youths lighting the Beltane fires at its base. Yews have long been held sacred in this land. It may well have been our only native evergreen tree at one time; to those who look to nature for their spiritual inspiration, its winter-green leaves, longevity and its ability to renew itself from its roots would have been deeply symbolic. To the Christian community that established itself in its shadow around 600 AD, the tree would have been a symbol of rebirth in Christ. To those who came before, perhaps it also symbolised rebirth or the renewal of reincarnation.

By 1833 parts of the trunk had been cut away to make quaiches, small, shallow cups, as souvenirs for visitors, though there was already new growth to a height of thirty feet. Today, the central trunk is gone, its erstwhile girth marked by a circle of small posts, showing the enormity of the original tree. ‘New’ growth forms what appears to be a small grove of trees, but they are still part of the original yew. The tree is now protected within a walled enclosure and its huge, gnarled branches supported on piers of stone. 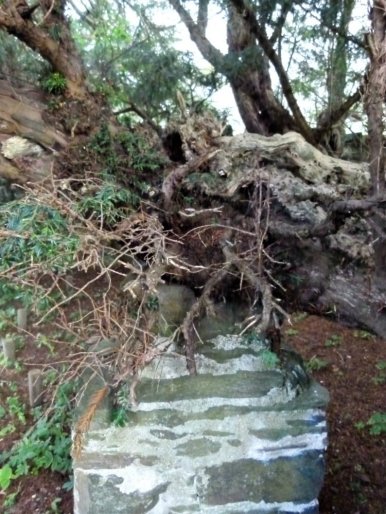 Yews have distinct characteristics, with individual trees being male or female. The Fortingall yew is a male tree… and yet one small branch has changed to become female and begun to bear bright red berries. Seeds have been saved to help study the process. To preserve the biodiversity of these wonderful old trees, cuttings are being grown to form part of a mile long hedge of the scions of ancient yews in Edinburgh. It is an odd feeling to think those trees could, if they are allowed, stand for millennia after we, and all we have known as our world has passed beyond memory. In a secluded corner by the yew, the Reverend Duncan Macara, a minister who served the parish for fifty years in the nineteenth century is buried. Already the inscription fades and is overlaid with lichen as Nature reclaims her own.

The path that leads to the yew attempts, with incised inscriptions, to put its age in perspective, showing the story of the land and the people who have found shelter beneath the tree. While the intellect can accept the history thus told, the feeling mind cannot encompass a world and a time that existed so very long before anything with which we are familiar. Nor can the ego envision a living being that existed so long without us, and which may live for many centuries after we are dust. And yet, we walk the living earth, and by comparison,the yew itself is no more than a fleeting presence. 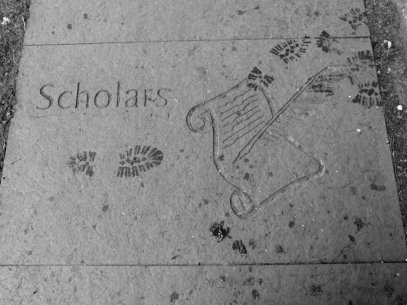 It is a far younger tree that serves best to illustrate the great age of the Fortingall yew. It stands just outside the protective wall, its branches covered in the bright red berries that now fall into the cupmarks on a neolithic stone found buried near the original tree. Our ancestors carved the cups; their meaning and purpose may be lost, but the marks are strangely familiar. We can recognise the hands of our distant kin in their work; a tangible link between then and now in which we can find a point of reference for our own lives. Between living tree and ancient stone, time is reduced to a scale more suited to human understanding and yet, somehow, that very diminution allows us a glimpse into the vastness of eternity.

7 thoughts on “Solstice of the Moon: Older than Time…”