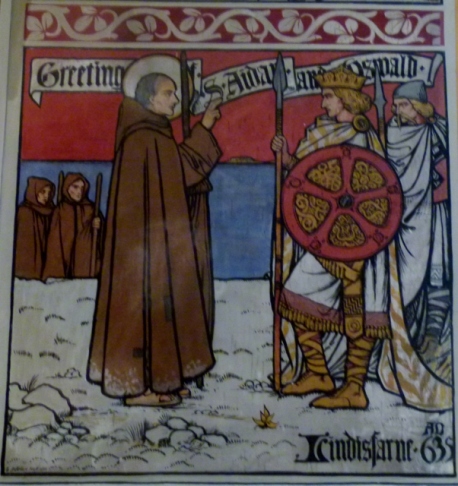 Where history, both false and true, unfolds upon the walls

And legend, faith and memory adorn its hallowed halls.

For slaves and saints remembered and a wordless story told

Of dragon-slaying warriors and courtly knights of old,

Must tell the myth that captures hearts and comforts bended knee

Creating visions of what was and what the world could be

If those who owe allegiance to the earthly rule of man

Can look past duty’s confines to a world where faith began.

Ben, fast becoming a folk hero after the apparent theft of a standing stone, now languishes in Bakewell Gaol. Don and Wen, suspected of being his accomplices, are on holiday… or ‘on the run’ if Bark Jaw Dark and PC 963 Kraas, hot in pursuit, are to be believed. From England to Scotland, the officers of the Law have followed the trail of the erratic couple as they visited the ancient sites of Albion. This time, though, as Don and Wen take the slow boat to Ireland, Kraas and Jaw Dark are one step ahead. But Ireland is a land of mystery and magic where reality is intertwined with vision and standing stones are still open doors… How long can Don and Wen continue to evade the long arm of the Law? In the shadows, a labyrinth of secrecy shrouds a mysterious figure. What is Montgomery’s interest in a small standing stone? Just how many high-level strings can he pull… and why? And what is the dark, winged creature that is now on the loose? Join Don and Wen as they continue their adventures in the sacred and magical landscape of Albion.

Head over to buy the book: Amazon UK