Sunday morning the world was drenched. Over breakfast we watched the sun come out and the mists begin to rise. By the time we had checked out and hit the road, it was blazing and the sky was clear. We were determined to chase the elusive second hill.

I had stumbled upon it online but had no idea of its size or situation… only that it sat amid traces of ancient occupation, standing stones and the moors. We had all day, a map and only Thornborough henge left on our list. And the sun was shining.

Except, as we approached the location, close by the Hole of Horcum, it wasn’t. The clouds came down, the mists closed in and visibility was reduced to mere yards. Undeterred we parked the car and set out in the amorphous morning.

There was no sign of anything other than the inside of a cloud as we walked. We were, it seemed, in a different time and place… alone in a silent world of mysteries. Vague shapes loomed briefly beside the path as we followed its course, only to be swallowed again by the clinging moisture. We could not see the landscape and could not even tell if we were walking ridge or valley…

After some time walking a shape, the shoulder of a hill revealed itself grey in the sky. A little further and we saw a magical valley through the mists, with a small, triangular lake at its centre. The mists shifted, dancing, revealing and concealing like some exotic dancer, tantalising the senses in a noiseless world.

The path turned down, steeply following a curve of the land. On our left bracken, rock and heather, to our right only misty glimpses of something… and then we saw it, vaguely outlined, just for a second… unmistakable and huge. It disappeared almost immediately and we were left awestruck by the magic of the morning that could hide a mountain in plain sight. 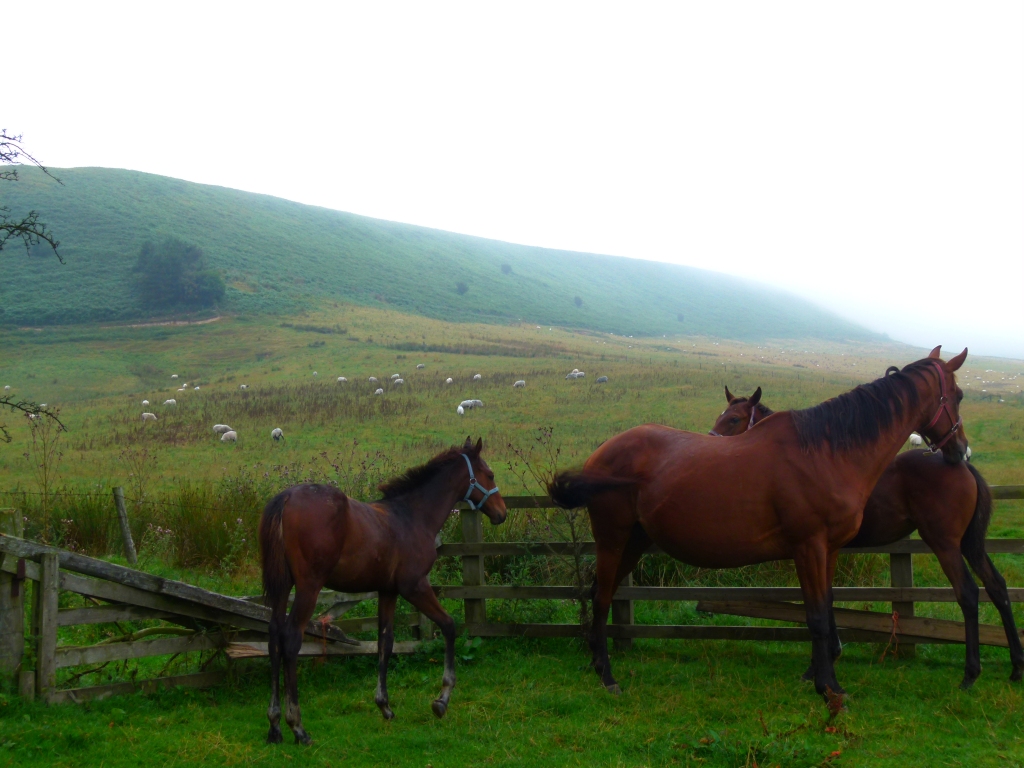 The mists began to lift as we descended into the valley. A signpost pointed across a field or back over the ridge… neither way a direct route to where we felt we needed to be. We chose downhill. Largely because a vague shape I could barely see tied in with our conversations of the night before…

Laughing we traversed the field to where this incongruous guardian awaited beyond a gate. On this side of the gate were a mare and two youngsters… a leggy adolescent and an even younger foal… all beautiful and curious.

Debating whether or not to cross the stile into the llama’s valley… which looked very much as if we were crossing into yet a deeper land, far removed from our own and redolent of magic… is an easy decision when curious horses are nibbling your ear. The littlest one was, indeed, very friendly…. The llama acknowledged our crossing and patiently watched our futile search for the elusive path.

Eventually, we returned to the gate and I began to talk to this guardian of the otherworld. My companion was, by this time, back on the other side of the fence and seated on a branch… possibly with his head in his hands, despairing at having taken up with a lunatic.

Yet the llama seemed to want to converse.. and I spent a happy half hour nose to nose with the creature. He preened when I told him how beautiful he was, appeared, indeed, to respond to the conversation…so much so that I asked him the way… and he broke eye contact for the first time,  nodding his head in the opposite direction. I asked him again and got the same response… twice…Thanking him I climbed back over the stile to where my companion, shaking his head in despair, awaited.

I laughed at the teasing that inevitably ensued… but following the llama’s directions, we finally reached the pathway and climbed the steep, bracken clad banks to the summit of our hill.  From that vantage point, we were able to make sense of the landscape and as I lay there watching the sky the first real warmth crept back into the sun.

From there the weather became glorious, and we finally made our way back to the car in blazing sunshine in what definitely felt like another realm. We stopped to see a hairy caterpillar safely across the road on my companion’s insistence… and he laughs at me? At least my llama gave us directions….

Of course, you could say we are a pair of lunatics… or, as has been said, at a slight angle to the universe… Or you might wonder how much of that inbuilt instinct and intuition we, as a race, have forgotten to listen to amid the hustle and bustle of our lives, surrounded by the blare of traffic and television. While we lose ourselves in noise and concrete, divorced from the natural world, we forget that we are part of it. The instinctive and intuitive levels are as much a part of what and who we are as our abstract thoughts and creativity. It may be that in being open to the landscape, its creatures and moods the way we are learning to be, we have touched something deep within that allows us to see beyond the boundaries our artificial society imposes upon us… and which we impose upon ourselves.

Maybe the ear nibbling horses were simply curious… maybe they were reminding us to listen to those deeper, silent voices in the landscape that speak directly to the heart. Who knows? Either way it was a magical morning.

The Hole of Horcum lay revealed below as we headed back to the car and the next leg of our journey… Thornborough henge… and the way home. However, there was a slight change of plan and the henge was filed for a winter visit. My companion, for some reason best known to himself, chose instead to suggest we go to the moors… my moors… my heart’s home.  As I turned the car southwest, joy at the unexpected gift welled up inside and my soul began to sing. For me, the best was yet to come…