I admit that I was nervous as we drove through the leafy tunnel towards the old stone and turrets of the Hall. This was a very special occasion and one to which we should not have had access. I could barely believe we were actually here and about to witness… no, be part of, such a moment. As we entered silently into the Hall, the great chandelier cast shadows that seemed to dance to the strains of pipe and drum that echoed through the gloaming. 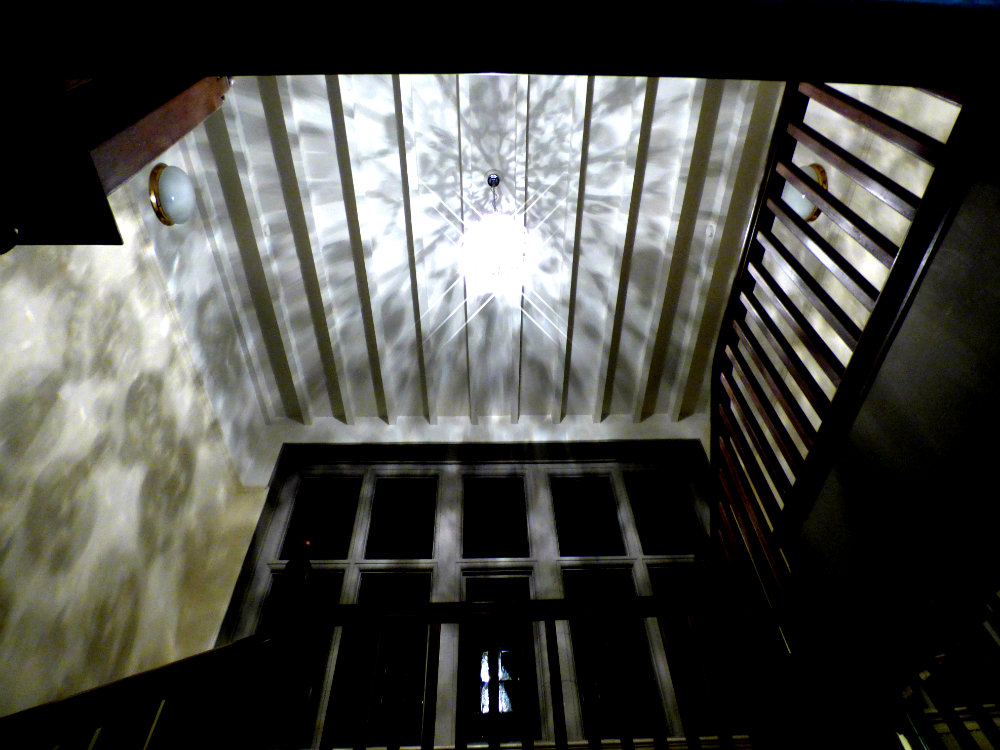 We had been summoned… when the shadowy presence of Charles James Fox issues an invitation, it is not to be ignored. Thus, duly scrubbed and presentable as a mark of respect, we headed for the car and drove through the dusk to the secret location. Plans had been carefully laid behind the scenes… plans of great complexity and precision, known only to a select and verminous few; a few known as … Mister Fox.

It is, I have to say, the first time I have gatecrashed a wedding. “We were invited.” Well, yes, I know. But even so… knowing neither bride nor groom, it did seem a bit strange. But this was no ordinary wedding… it was a marriage of Foxes and Charles James Fox, their mysterious leader, had not only said we should come but had relayed the bride’s gracious permission for our presence.

We arrived just before the cake was to be cut… which was good as at least, I thought, we would recognise the bride and groom! We were, however, almost immediately welcomed by another prominent member of the Foxes. Charles James, it seemed, was, shall we say, otherwise occupied…

As darkness fell over the sweeping lawns we watched as black-clad shadows flitted through the trees and furtively prowled across the open spaces. Tall trees shielded the Hall from prying eyes. Things were afoot. Inside, the celebration became a cèilidh. Chairs were swept back, instruments taken up and dancers filled the floor. We wandered out on to the terrace, keeping an eye on the mysterious activity on the lawns… 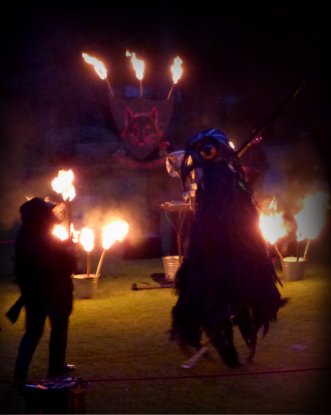 Then through the windows we saw an inhuman figure, at least eight feet tall, invade the banquet! A Silver Fox, armed with a magical staff… the fiery masks of Foxes… and the bride and groom, cloaked in black and silver… were led out onto the terrace and down the steps to the lawn.

Torches flared and a procession of Foxes filed towards the dancing ground. Bride and Groom… themselves Foxes, unmasked for this one night, were led to their places while Foxes armed with flame harried the giant figure of the Crow who was not routed until the Silver Fox cast flame about the dancing ground, illuminating the night with fire, smoke and magic. 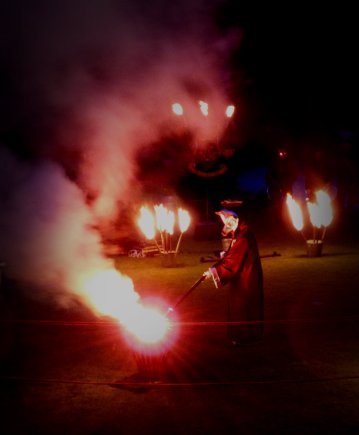 I cannot show you all the pictures… only some may I share. Not only are there too many, but the unmasked couple may not be seen. Yet we saw. We watched as their union was graced with fire, dance and music. We felt the joy as that close company embraced the moment and shared the glance of tear-jewelled eyes as the bridal pair walked through the archway of torches into a new world together. 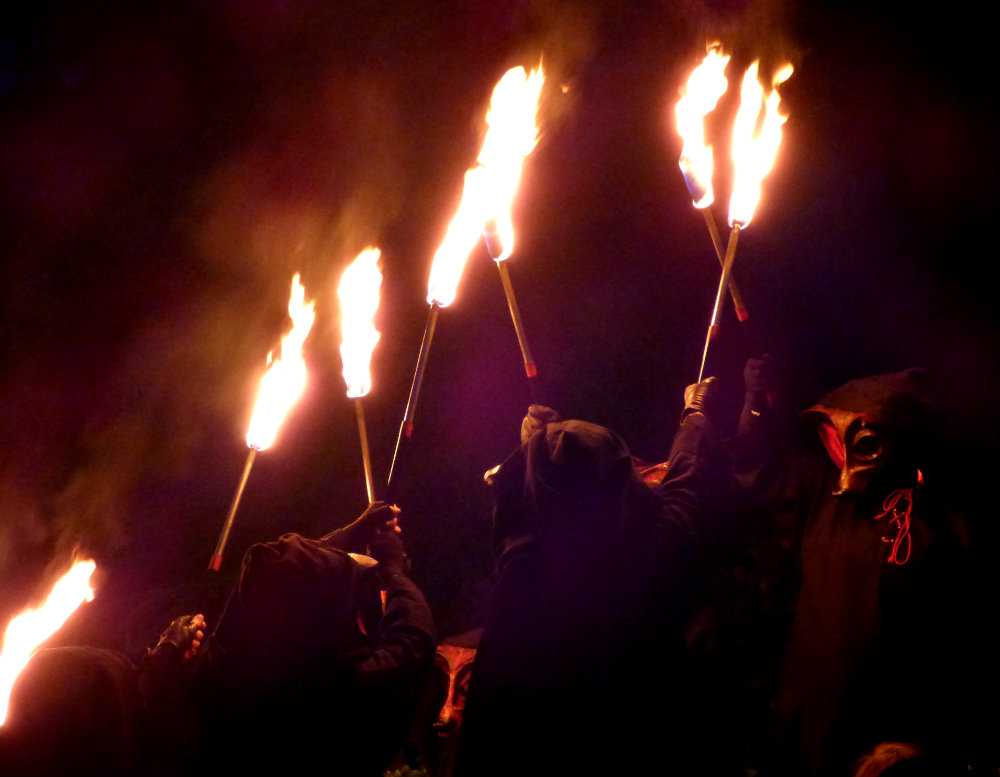 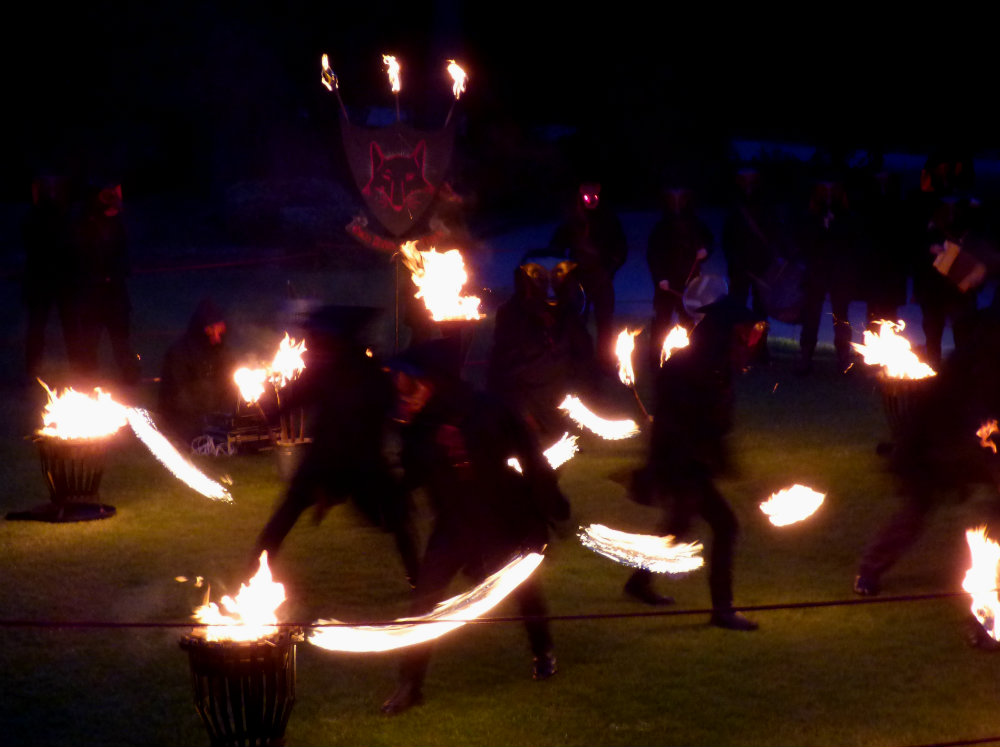 We offer our congratulations to the newly wedded Foxes and our gratitude for being granted the privilege of being present as such a truly magical moment. 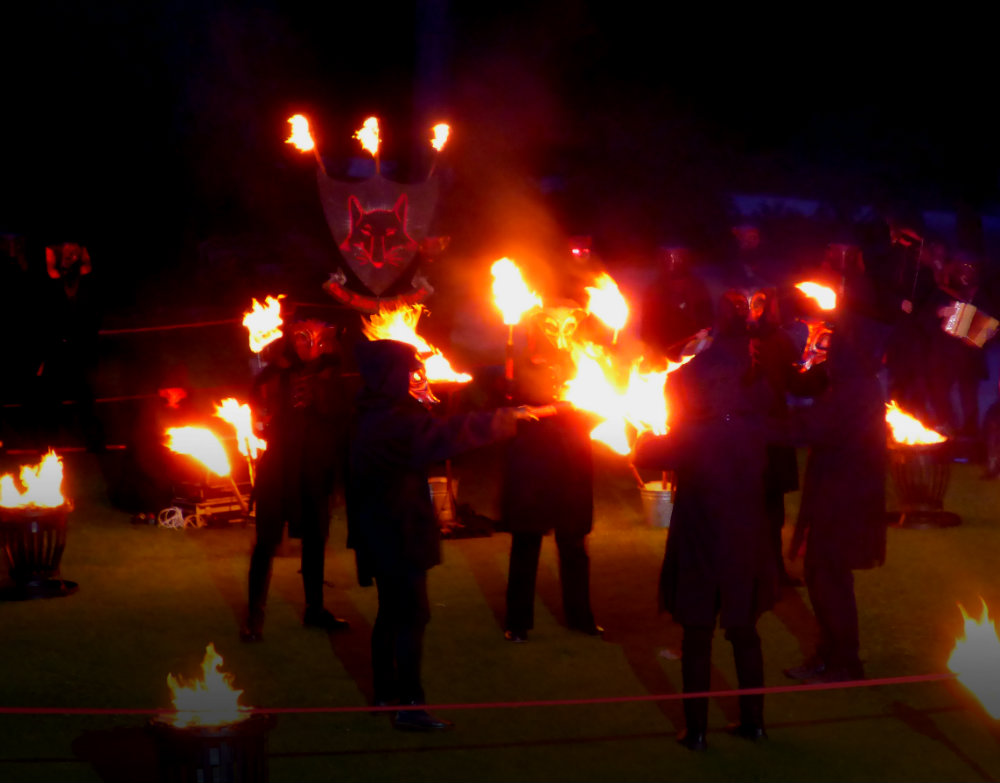 1 thought on “On fire – a very special evening”