We were greeted by the sight of yet another jackdaw, studiously ignoring the offended pigeon whose headstone it had invaded. There was so much in the body language of these two that any further attempt to understand their various languages would have been superfluous.

You and your group are within the confines of one of the greatest and most beautiful stone circles in England. The weather has settled, the grass is beginning to dry and the whole afternoon stretches before you. What do you do? It’s obvious. You take them to the church instead.

I know, that doesn’t sound like the most logical move, but there were good reasons. First, it meant we had to walk past the Henge Shop in Avebury, and as anyone knows, that isn’t possible. You have to go in. Because whether you love books, crystals or crafts, you are going to find something there… I found a lovely double-headed axe pendant, but was dissuaded from acquiring it as a gift, settling instead for a green man… just as appropriate, if less pointed. We also acquired the first few items for next year’s workshop, much to the discomfiture of their intended ‘victim’. But more of that anon…

The other reason for going straight to the church is that we know Avebury, know its size, scope and beauty… know how it makes you feel… and knew very well that we would not get to the church if we didn’t go there first. And it is well worth a visit.

The parish church of St James goes back to the last years of Anglo-Saxon Britain. Its original dedication seems to have been to All Saints. I have to wonder if they were calling in every bit of help they could get in this ancient pagan landscape. Parts of the nave were built around 1000AD or earlier and though much altered by the Norman conquerors and subsequent generations, the little church exudes antiquity. In a strange way it feels older than the stones of the circle… they are alive with a timeless sense of relevance to our human condition while the church is pinned within time by the overlay of historical context and dogma. It cannot, in any way, reach back more than two thousand years, being a Christian place of worship. Yet the traces of man have been found here, from flint tools to the great henge and circles, spanning a period of at least 9,000 years. On such a scale linear time ceases to have any relevance at all… it is simply the story of human life itself.

The doorway of the church is typically Norman, being added when the original Anglo-Saxon church was altered and the aisles added. In the 13th C the chancel was rebuilt and later remodelled. Yet overall, the outer normality of the building contains an ancient heart. In the north aisle, hidden behind a screen, is the parish chest, used to contain the records. On the floor beside the little staircase that leads up to the rood loft is a small patch of medieval floor tiles, bordered in later tiles.

The rood screen and loft are unusual as few early examples survive in such a complete state. It dates back to the 15thC and would originally have held the Great Rood, that large crucifix that looked over the congregation. During the Reformation, the Rood would have had to be destroyed. In 1561, Elizabeth I, issued further orders, and it is probably at this time that the screen was taken down. Most were destroyed or their timbers re-used. This one, for some reason, was hidden; immured behind a false wall in the chancel, and there it remained, forgotten, until it was rediscovered in 1810. The screen was reinstalled and later the painted panels were added, showing the apostles. 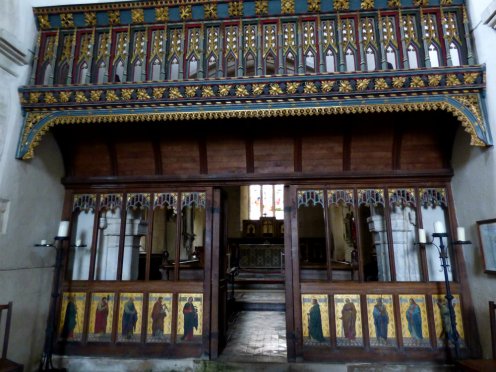 Treasures abound in this tiny church, from the 17th century bell timbers, to the stained glass. One of my personal favourites is the small lancet of the Madonna and Child, with a tree running above and below whose entwined branches mirror the older symbolism of the twin serpents, the polarity of man and the weaving of the energy lines across the landscape.

But the font is the best… it really is quite spectacular. The font itself is probably Saxon and therefore over a thousand years old. The carving on the sides appears to have been added around 1120AD. Interpretations vary, though it is thought to show the Christ treading on the heads of two serpents or dragons. To me it looks more as if they are biting his feet. The addition of the crozier means that rather than Jesus, it could be a bishop. The alternative theory is that there was a misinterpretation by the artist who added the crozier anyway. The font is still in use… and thus the tradition of baptism here has deep roots.

We had been asked to show how we explore the churches, so while I did the detailed and methodical tour with the camera, my counterpart took up the position of receptivity on a pew in the choir. Of the two, his method is closer to the truth of how we explore. The eye, like the lens, can only see a fraction of the reality that is expressed in stone, wood and glass. What they perceive informs knowledge, what simply being there and open to the spirit of the place can bring is a growing understanding that both supersedes and illuminates knowledge.

We left the little church, with its laughing lion, hidden behind the rood screen and passed the gates to the Manor and its dovecote, passed the little pond, then stopped for refuelling on brioche and chocolate rolls. We were going to need that… just yards away stood the gate to the Great Circle of Avebury…

2 thoughts on “A thousand years of worship…”