I’m going to introduce my first quick review with a cautionary tale. Back in the dark ages when I was at university, a fellow English major asked me to go to an art movie with him. But—here comes the cautionary bit—I neglected to find out in advance that he was also studying German epic poetry. The art movie, which was in German with those English subtitles that don’t really show up against black and white film, seemed to be some kind of allegorical poem involving King Arthur’s knights and their search for the Holy Grail.

I’m not really sure about the plot of the film because A) it went on for untold hours of torture in which people wearing gauzy clothes over tights talked a lot and floated around but didn’t seem to accomplish much, and B) German art poetry. My date was very excited about all this and did not, I think, notice when I finally sneaked out of the theater on pretext of looking for the Ladies. On my way out, I overheard two people talking about how this was only part one, and how much they were looking forward to returning for parts two AND three. I broke into a run. During the next two years until graduation, I avoided him for fear he’d subject me to more art.

My point here? Sue Vincent and Stuart France took a similarly legendary Arthurian tale, set it up as a graphic novel, and not only added a time-travel intro, but also embedded it in the world of their iconic Mister Fox and his troupe of dancers. And they do the whole thing in just 64 pages. In pure self-defense, from now on I will keep an electronic copy of Mister Fox And The Green Man on my phone at all times in case someone tries to suggest we view a German Epic Poetry Cycle. 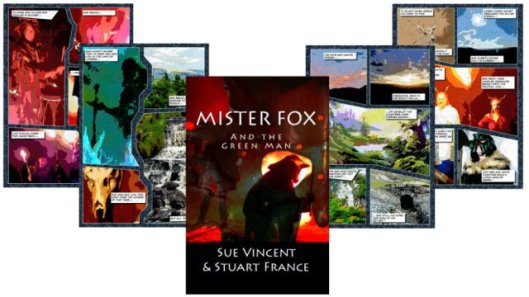 Click on image for preview, reviews, and buy links from Amazon.

When Special Agent Tommy Welch is called into Tee’s office, he has little idea of the perils of his latest assignment. Accompanied by the sensuous Miss Hunnyfludd, Welch believes he is to investigate an outbreak of mysterious Foxes. Instead Tommy finds himself flung far back in time, to the court of King Arthur, where a Green Knight is about to extend a deadly challenge…

Within the humorous spoof that frames the story, the reader is transported to Camelot to witness the confrontation of Gawain and the Green Knight. Based upon the story that lies deep at the heart of Arthurian lore, the threefold nature of the ancient myth unfolds…

The mix of Christian and pre-Christian themes is certainly not a new one, as seen by the presence of The Green Man as Sanctuary knocker, Durham Cathedral, UK

But just as our hero starts secret-agenting in earnest, he’s ambushed by the Green Man, and travels back in time to the second mythology and Logres, the kingdom of King Arthur and the knights of the round table. When the Green Man challenges the Knights of the Round Table to a fight and offers them the first blow, only Sir Gawain is brave enough to accept what is obviously a trap. Sure enough, the decapitated monster picks up his severed head and informs the company that in one year, Sir Gawain must offer him the chance of a return strike and certain death.

From there the knight must solve a series of riddles, survive traps and tricks, and find his way a year hence to face his death—or worse, marry a hideous hag who offers hope in exchange for marriage.

Interspersed is the third myth system, perhaps most ancient of all, in the form of mysterious foxes whose presence and especially their dances both frame and resolve the story.

While this retelling of Sir Gawain and the Green Knight sticks with a familiar mix of Christian and ancient themes, it does lean more heavily on the pre-Roman themes and heritage. As a graphic novel, the gorgeous pictures literally paint the background, mood, and fantastical setting. The story itself seems secondary to the themes of death as one point of a cycle that includes past, present, and future.

I love this (admittedly weird) series of little books. This one is perhaps the strangest, but certainly deserves a read.

*I received this book for free from the publisher or author in exchange for an honest review. This does not affect my opinion of the book or the content of my review.*