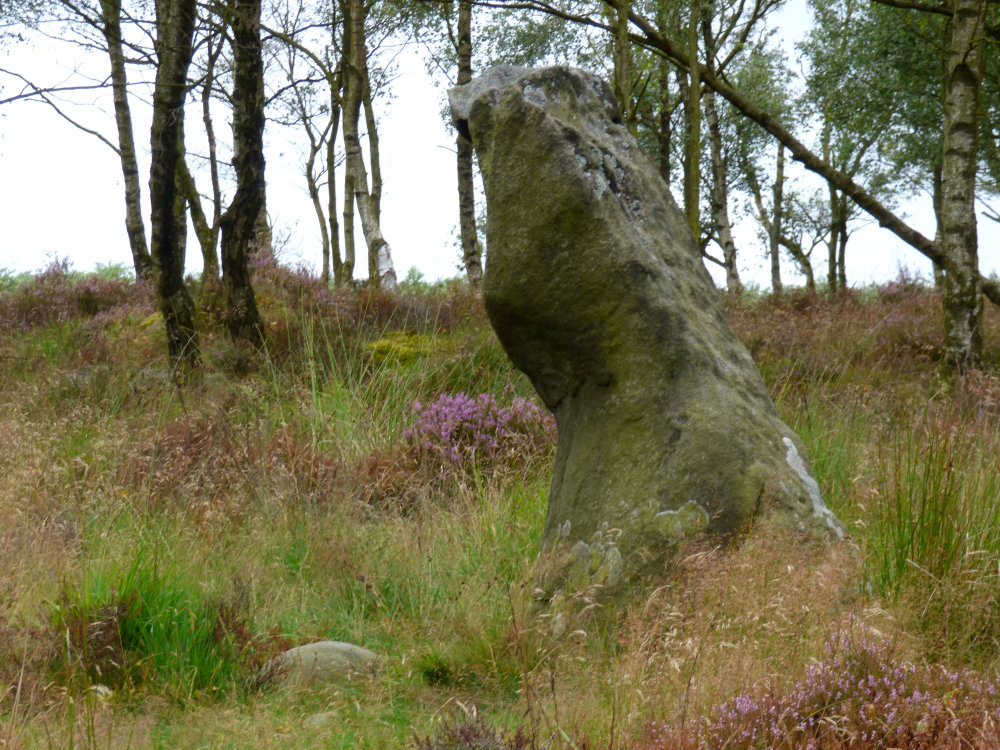 We had brought the group here for just two stones. Nothing as visually spectacular as the wonderful dolmens we had seen in Wales, but to a quiet, green glade that always feels as if it is waiting and where a single standing stone rises like the gnomon of a sundial from the earth. If you saw only a picture, you would be forgiven for questioning whether or not it was a real standing stone or just an erratic, dumped there by some passing glacier in millennia past. If you walk into its presence, you have no doubt. 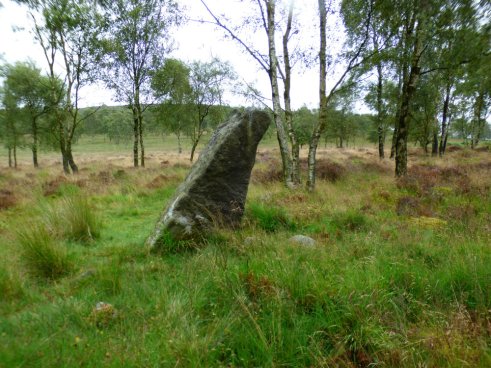 Even so, it is good that for those who demand scientific evidence, there is also the archaeological report of this vast Bronze Age site. We’d had no idea when we had first visited how wide the site might be, or what had been found there. Nevertheless, we had recognised this and many of the other features of the area. It was only later research that bore out our flights of fancy, including the idea of funerary rites.

There are cairns, a huge enclosure, strange pits and a variety of hut circles, including one that appears to have been part of a ritual site for the preparation of the dead. We had even found what seems to be a stone circle, though that would bear further investigation at a later date. For now, our main interest was the standing stone and the archaeology confirms that its base had been carefully packed with rubble to position the stone in its present place.

The archaeologists also used 3D modelling of the way that light hits the stone, allowing for shifts in the earth’s tilt over the four thousand years that the stone has stood there and, finding that the north side stays in permanent shade throughout the winter, they concluded that it must be some sort of symbolic sundial. Which is exactly what our group concluded without that information.

What the official team didn’t seem to take into account are the curious notches on the top of the stone that stands over seven feet high. Undoubtedly weathered, they seem deliberate and provide a sighting line to distant Frogatt Edge… and perhaps, who knows, to the stars and planets beyond. The seasons are written in the turning of the sky and the stars would have been so much brighter when the only light at night came from the embers of the fire. 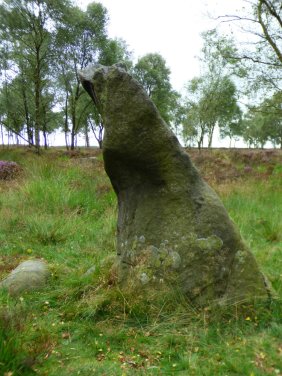 The stone itself is curious. With every step that you take around it, the form seems to change. Everyone sees something different, yet the forms are clear enough that they can be pointed out and shared. When we first saw it, we named it the Crone Stone for its hooded shape… and Chronos was the Greek personification of Time. From another angle, it becomes a bear, from yet another, a double-hooded form…and most famously, on one of its sides is a ‘devil’s face’. Since Christianity took hold of these Isles, everything that went before is consigned to the devil.

For us, it was one of those places you do not want to leave. Even though we have always been there in poor-to-awful weather, there is something about the place that invites you to stay and just spend time with the stone. As if it misses fulfilling its purpose. We are always reluctant to turn our backs to the stone and walk away. This time, we were going to work with the stone and the spirit of the place, so we gathered our companions and showed them what we wanted them to visualise during a guided journey, going back in imagination, into the web of life, seeking an ancestral figure with whom to make contact. 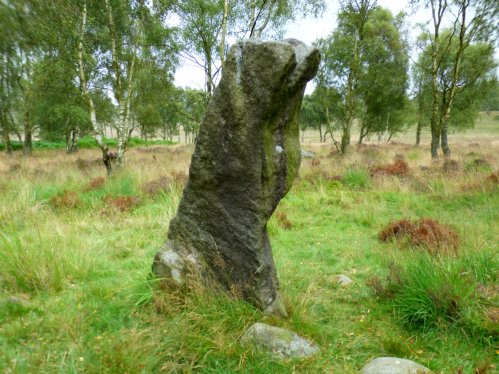 It is not for us to say how any meditation should work out for any individual…. we provide a guide and an idea and the results are as personal as the interpretation of the ideas. Whether that ancient past is seen in terms of linear time, part of the collective unconscious or as a level of personal consciousness is a matter of choice and inclination. What we hoped was that, rather than fixing on a given individual from the past, they would begin to connect with that pool of collective wisdom that is behind the idea of the Ancestors. How that manifests in the mind and emotions is a personal thing, but once touched, it opens the gates to a deeper understanding. 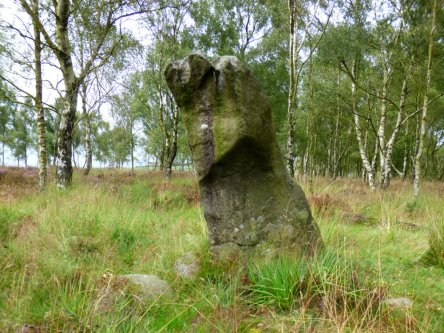 Both the rain and the midges began their assault as the meditation began, but we did not plan on keeping everyone standing there for too long. There was so much more to see at this site… though the bracken would be too high to see many of the places we could have taken them. The bracken would, undoubtedly, make the next part of our journey more difficult than usual, but we planned on making it more unusual still. It was also a bit of fun but with a serious undertone. We described our destination… then asked them to use their pendulums and rods to dowse for it…

2 thoughts on “Circles Beyond Time ~The Standing Stone”