‘…The landscape of Cavan is dotted with drumlin hills but there are also many lakes and the drumlins form wooded islands creating areas of half water, half land… marshy, boggy terrain which is not easy to cross.

Perhaps because of this, Cavan has more secrets than most counties and some interesting places.

One of these is the ancient University of Tuaim Drecuin. 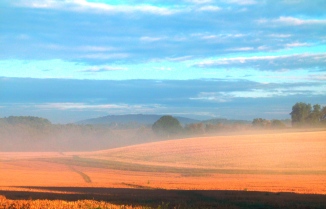 Its name is thought to survive in the parish of Tomregan which includes the town of Ballyconnell within its boundaries.

In the grounds of the Church of Ireland church there is a stone called ‘the Tomregan stone,’ which is said to depict St Bricin, founder of the university, performing an operation.

St Bricin is referred to as a saintly physician of extraordinary skill.

He was a king’s son, eligible by birth for kingship.

Experience and training in battle would have been an important part of his training for kingship and it was during the battle of Magh Rath that he was badly wounded and taken to hospital at Tuaim Drecuin.

‘…his brain of oblivion was dashed out of Cenn Faelad’s head in the battle of Magh Rath.’

Losing his ‘brain of oblivion’ sounds like a reference to the practice of trepanning, whereby a hole is bored through the skull to relieve pressure on the brain and possibly facilitate special mental abilities.Whether this is so, St Bricin performed an operation which saved his life and he stayed for three years to recuperate at the university. This was the custom and during that time he studied at all three schools at the university… Classics, Law and Learning… Tuaim Drecuin was a flourishing centre of study at this time with its roots going back into the Druidic mysteries and Bardic tradition…’

Sounds like it’s just up our street! At the Ferry Port, then… perchance to meet. But before that we have the small matter of our trip to ‘Scort-land’ to complete…