Our morning began with an early meditation upon the hillside, turning our attention to the light, both in literal and symbolic terms. It was a moment to drink in the beauty of the land as a ‘false dawn’ opened a window in the clouds and we placed the work of the weekend under the aegis of Spirit. Each of us brings our own peculiar interpretation to that word and concept… and that is how it should be; the relationship between each of us and whatever we conceive of as spirit, divinity or a guiding presence is both unique and personal. 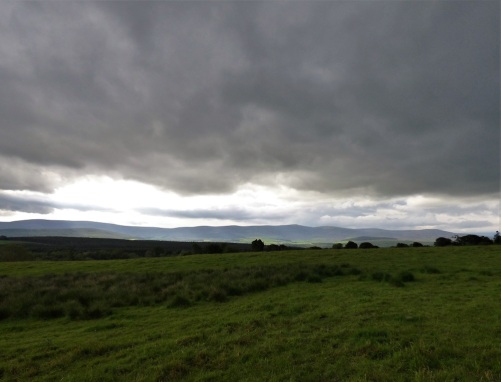 In simple rituals and in spite of a multitude of perspectives, we can set differences easily aside, colouring the symbols we use with our own interpretations in order to work together towards a common goal. That is one of the ever-present joys of such workshop weekends. We were using a five-pointed star, but there is always a hidden point to any symbol and, magically, that always operates on a different level to the symbol itself. The opalescent horn of the Unicorn would be both the guardian of the threshold and would point the way for us.

Having established the Unicorn as a symbol of Spirit the night before, we were about to begin a more personal journey into the elements of our own nature. Using imagination, knowledge, memory and the senses, we would map that journey onto the five points of the pentagram. Dean had carefully chosen passages from Shakespeare’s Macbeth to illustrate the psychological aspects of the elements as they are played out within the human psyche. He had chosen stones with different colours, patterns and textures to represent the physical elements with which we would weight down the ribbon paths we were to walk around the pentagram and chosen sites for us to visit that reflected the elemental principles too. In other words, he had tied the journey together beautifully on all levels. 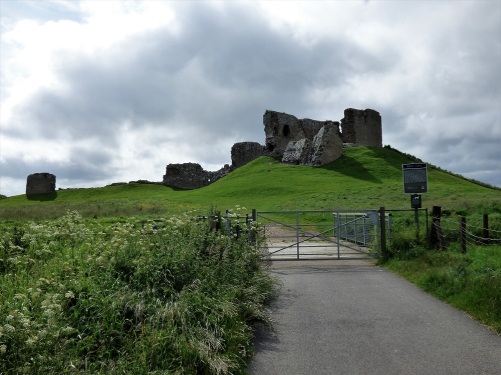 Our next stop would be Duffus Castle, built around 1140 and abandoned in the eighteenth century. But the visit was not about the details of its construction and historical ownership, but was to take a more personal perspective. 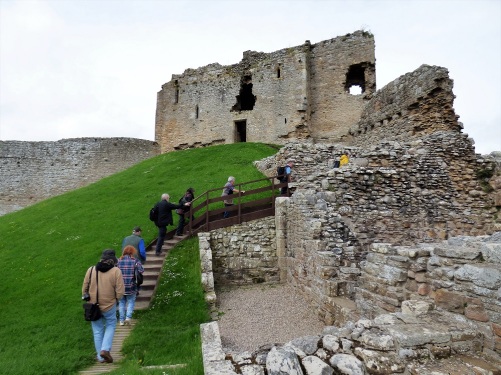 The castle is surrounded by the remains of a moat, now a pure, clear stream, teeming with wildflowers and small creatures. It was here that we began to get an inkling of Dean’s deep love and knowledge of the natural environment of his adoptive home, much of which he would share with us over the weekend. It is a very beautiful site, an island in a green land. Rising from the Laich of Moray, it dominates the landscape and, from a distance, seems to epitomise our idea of a ‘proper’ castle.

The mound upon which the fortifications are built is imposing. Both the motte that holds the castle keep and the bailey… the lower enclosure that once protected the stables, people and day-to-day practicalities of castle life… are intact. 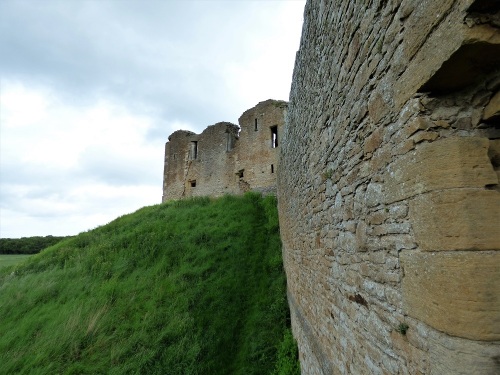 It is only as you come closer that you see that the castle has not only suffered the depredations of time, but is gradually slipping down the slope of the motte to be swallowed by the hill. Windows have broken, whole sections of the structure seem to be sailing away. It is almost as if the most solid-looking part of the castle is the most fragile… and what a good analogy for our own masks that might be.

It has a very different ‘feel’ from its Norman counterparts in England. So often these were built by the conquerors on sites already important to the community, thus both wresting position and imposing authority on the land and its people in one fell swoop. There is a lot of research ongoing at the moment, looking into the age of motte and bailey-type earthworks that were once Norman castles… and had, we now know, sometimes origins and uses of a much earlier date. 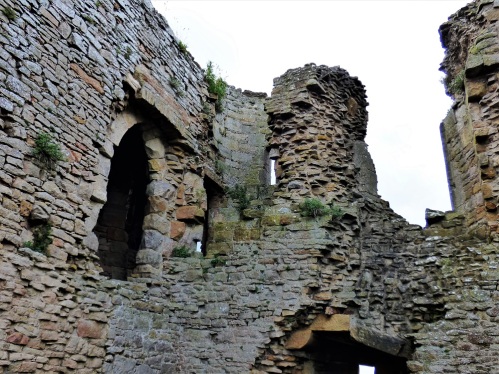 Here though, the castle mound was purpose-built. There was none of the underlying trauma or conflict felt at many other such sites. Sadly, though, it may be this very fact that has proven to be its downfall; the ancients were pretty good at building earthworks. Apparently, the castle-builders had needed to learn a bit more about foundations…

And that carried us neatly into the next part of our work, for the foundations of our own personalities need to be firmly built and deeply rooted before we can build upon them.

We were looking at ourselves from a magical perspective and the spiritual journey of each of us has to start somewhere. We all start at the beginning, knowing nothing, and build gradually from that point. How you build will determine how you will develop. 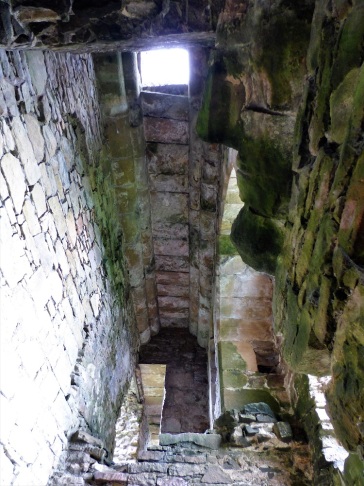 Most of us start by devouring information… books, articles, courses… whatever we can find, like newly-hatched chicks in need of nourishment. Some will believe that is enough and will construct an impressive-looking façade from what they have learned. You can carry on adding knowledge for decades… but unless you do the ‘spade-work’, the spiritual edifice you are building will one day crumble and swallow itself.

You may even find that, like Shakespeare’s Macbeth, the ‘power’ you think you have attained demands more and more of you in order to maintain its illusion. The real ‘spade-work’ of a spiritual system tends to include getting to know yourself… and that may mean digging into areas of the mind, heart and memory that can be as unpleasant as a blocked sewer.

It also means finding ways to put into practice what you have learned. That’s where this type of workshop can be useful. The written word can only teach knowledge and report experience… it cannot teach understanding, though it may show a way towards it.

But maybe, too, this broken castle might symbolise the freedom that comes when we can cast down the walls behind which we so often feel the need to hide, opening ourselves to light and life. Either way, it was a great place to start our day.

6 thoughts on “Dreaming Stones: “Upon the earth…””