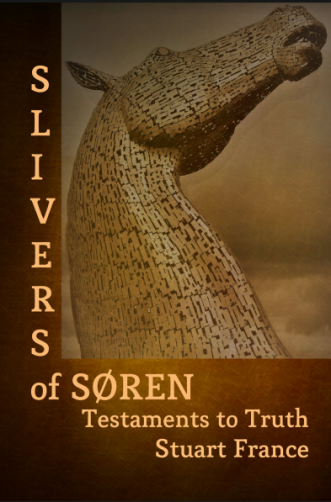 …Kierkegaard knows only too well what is at stake here.

How the mask can simultaneously both hide and reveal.

Especially for those who know how to look…

He chooses his pseudonyms very carefully, almost, too perfectly!

It has been surmised that Kierkegaard’s ‘John’ is a form of the Folk-Type, ‘Faithful John’,

and there is undoubtedly much profitable mileage to be gained by pursuing such a supposition.

Abraham, after all, fulfils many of the Folk-Story requisites, although, not for a king.

Which makes ‘John’ sound like he can be petitioned.

A sort of ‘disembodied conscience’, if you will.

There is something of Pinocchio’s ‘talking cricket’ here,

who was killed with a mallet for offering advice,

In short, these tales are ‘Grateful Dead’ variants.

So then, are we not also bound to ask which ‘Biblical John’ was silenced?

And then to notice, perchance, that Kierkegaard’s ‘John’,

is actually anything but silent!

Is this a clue?

It may well be.

Silent John, it seems, is obsessed by form.

In his quest for the modern day Knight-of-Faith form is everything.

He spends his days in pursuit of a physical sign, of an outward gesture,

a knowing glance, or even a raised eyebrow, and therein lies his down fall!

In his relatively short literary career, Danish philosopher, Sǿren Kierkegaard, challenged the religious orthodoxy of his age with a series of exquisitely penned philosophical works which he placed before the reading public under a plethora of different aliases.

All these writings addressed the spiritual concerns of his age and, on a broader note, questioned just what it means to be human. Losing the ability to think for ourselves, and to question the decisions of a ruling elite, for Kierkegaard, was a prelude to surrendering our very freedom as a people.

Recognising alarming parallels with our own times, and taking Kierkegaard’s classic, Fear and Trembling as a start, author and essayist, Stuart France, heads straight to the heart of the Jewish and Christian spiritual traditions with this poetic foray into high ideas…

The quality of story is not strained.

The Western Mystery Tradition may never be the same again!